Our top-stories-of-the-year countdown continues today with No. 11: The Local Spins interview with the legendary Daryl Hall and Todd Rundgren, who played Grand Rapids in November. EDITOR’S NOTE: Our countdown of the top Local Spins stories of 2022 based on reader traffic continues with No. 11: A feature on Todd Rundgren and Daryl Hall, interviewed by Local Spins writer Ross Boissoneau prior to a Nov. 23 tour stop at DeVos Performance Hall in Grand Rapids.

For those of a certain age and musical bent, the combination of Daryl Hall and Todd Rundgren sounds like the perfect dream team.

Combine the blue-eyed soul of the two Philly-area natives with their various rock and pop hits and add the superb musicians of the Daryl’s House band, and you’re right, it is a dream team.

The assemblage made its way to DeVos Performance Hall in Grand Rapids on Nov. 23, part of the second leg of a tour that began in the spring.

Hall has been a chart-topper with longtime duo partner John Oates since the mid-70s. Along the way he’s maintained a respectable solo career, though significantly less conspicuous than that of the duo. He released the two-disc retrospective “BeforeAfter” April 1, coinciding with the opening date of the tour.

Hall’s first solo album, “Sacred Songs,” was famously held by his record company for three years. Its adventurous spirit, featuring guitar and production work by King Crimson’s Robert Fripp, was viewed as being not only at odds with Hall’s commercial successes, but potentially as career-killing by RCA, Hall’s label.

Its commercial appeal when finally released was limited, but proved no detriment to the continued success of Hall and Oates. Their mutual admiration society found Hall contributing vocals and co-writing two songs on Fripp’s solo debut “Exposure,” released in 1979 (a new version of one of those songs, “North Star,” is on “BeforeAfter).” 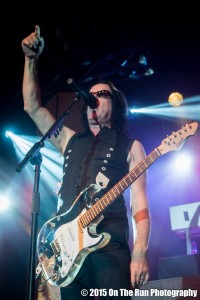 Hall’s next solo outing came in 1986 with “Three Hearts in the Happy Ending Machine” and “Dreamtime,” his most successful solo single. Three more solo efforts followed, culminating in the current retrospective. “One thing holds it all together. The glue is my voice,” says Hall.

The current touring band is the same one seen on Hall’s web and TV series “Live From Daryl’s House” and from previous Hall and Oates tours. “It’s a great, great band. We’re telepathic with each other. Everybody gets along,” he says.

The 76-year-old Hall says the tour grew from a desire to play music as close to his heart as any of the Hall and Oates hits. “If not now, when?” he asks rhetorically.

The decision to include Rundgren on the tour stems from their long friendship and musical association. “We go back to childhood. We’ve worked together years and years,” Hall says.

Rundgren produced the Hall and Oates album “War Babies” in 1974, and Hall and Oates were among the guests on Rundgren’s 1978 live album “Back to the Bars.”

More recently, Rundgren joined Hall as a guest on “Live From Daryl’s House,” and Rundgren returned the favor, inviting Hall and the band to play and record at his home in Hawaii. “It was a lot of fun. They were on their way back from Japan. Why not stop off in Kauai and put on a show?” says Rundgren.

Now they’re back on the road performing individual sets before joining forces at the end of the show. “It’s the final fulfillment of an idea,” Rundgren adds.

HALL COMMITTED TO SOLO TOURS; RUNDGREN RELISHES MIXING IT UP

He credits his career producing other artists with helping him become a more versatile musician.

“As a producer you have to be adaptable,” he says. No doubt: Among his many production credits are Grand Funk Railroad, Cheap Trick, British pop heavyweights XTC, one-time punk poetess Patti Smith, the Psychedelic Furs, Shaun Cassidy (!), New York Dolls (!!), the Tubes, and a host of others.

He feels that’s given him both the ability and the freedom to explore numerous genres on his own, from blue-eyed soul (much of “Something/Anything” and “A Wizard A True Star”) to hard rock (“Arena”), complex rock fusion (“Todd Rundgren’s Utopia”), 60s pop and rock (side one of “Faithful”) and always, always technology (for just one example, the voice- and Fairlight-driven “A Capella”).

“I’ve always been interested in other genres and how to fit in my style.” Rundgren clearly enjoys playing with different people. He’s regularly switched out members of his own bands, even gone on the road with the string quartet Ethel and co-headliner Joe Jackson. That particular tour prompted some reflection and a decision to not play keyboards in concert anymore.

“He’s a much better piano player than I am,” he says of Jackson. “I used to play enough to accompany myself. I’ve made a greater commitment to my singing over the years. Singing has to take priority over playing.”

He’s still comfortable playing guitar, though he’s used another guitarist in his shows over the past few years, and Shane Theriot is playing lead guitar in the Daryl’s House band.

As further proof of his versatility, Rundgren will join Hall fresh from working alongside guitar mavericks Adrian Belew and Scrote celebrating the music of David Bowie.

Such stylistic freedom is something Hall has had to work for. “Daryl and John had a certain brand to exploit. That hadn’t left (Hall) a lot of opportunity (for other endeavors),” Rundgren says.

No doubt that helped fuel Hall’s decision to record and tour on his own. “I’m proud of these songs,” Hall says.

In addition, the forced layoff during the pandemic provided time to reflect. “Now that I look back, it was a welcome break. It reset a lot of things with me, what really matters, what I want to do.”

While he doesn’t say he will never again perform with Oates, he says they each are committed to their solo careers at this point. And for him, that means touring with music from across his five-plus decades in the business.

“It’s me taking the reins. You’re going to hear Daryl.”