Our “top stories of the year” countdown continues with No. 11: Our profile of Pete Bardolph and John Gelderloos, who closed their Grand Rapids instrument and gear store after a long and fruitful run. 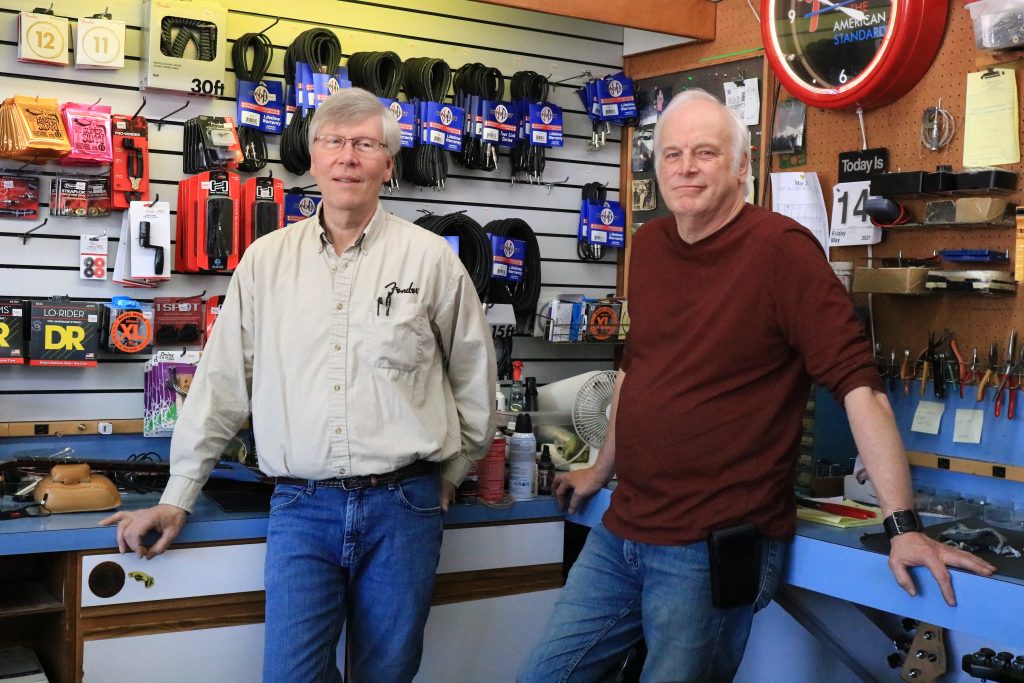 A Crazy Idea That Now Has a 42-Year Legacy: John Gelderloos and Pete Bardolph of Rainbow Music. (Photo/Anna Sink)

EDITOR’S NOTE: No. 11 in Local Spins’ countdown of its top 2021 stories highlights the lengthy run of a go-to Grand Rapids music store that served area musicians for more than 40 years. Revisit this June 2 profile by writer Charley Honey, and scroll down for a photo gallery.

As a boy of about 11, Everett Domeier would follow his musician father, Pete, into this cool corner music store, feast his eyes on all the gleaming guitars and listen to his dad talking to co-owners Pete Bardolph and John Gelderloos.

It was a kind of magic that set him up for his own future as a working musician and lifelong patron of Grand Rapids’ Rainbow Music.

“I’d stare at those guitars and talk to those guys, the best I could, ‘cause they knew everything,” Domeier recalled of Rainbow’s original location at the corner of Alpine Avenue and Leonard Street NW.

That was 42 years ago. And while his father has since passed away, Domeier would still stop by Rainbow once or twice a week to pick up gear, chat with Pete and John and hang out with old friends. 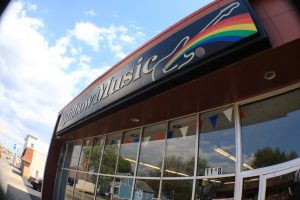 West Side Institution: The building has been sold to a marijuana business. (Photo/Anna Sink)

For Domeier and countless other Grand Rapids-area musicians, it had been the go-to place to buy instruments new or used, get your guitar serviced and connect with your fellow players.

“It’s a comfort food,” said Domeier, who has long played guitar and other instruments in numerous bands around West Michigan. “Stop in there and you probably bump into somebody.”

That’s the kind of loyalty Gelderloos and Bardolph have built up at Rainbow, the iconic West Side guitar and music gear shop that for four decades reliably served working musicians, living-room jammers and parents getting ukuleles for their kids.

Ask a fellow guitarist where he picked up that sweet acoustic, and chances are he’ll answer, “Rainbow,” and you know just what that means.

Like the old corner drugstore where you always bought your baseball cards, it seemed like Rainbow would always be there at 1148 Leonard St. NW. But after June 12, 2021, that was no longer the case. That’s the day Gelderloos and Bardolph closed up shop after supplying and servicing Grand Rapids music-makers since 1979.

“The first reaction is, ‘No, it can’t be!’” Bardolph said of their dismayed customers. “Then they wish us well.”

No, the culprit’s not COVID. In fact, their business boomed during the year that followed the pandemic’s onset.

Bardolph and Gelderloos had actually decided to sell the business pre-pandemic, but the buyer pulled out once the virus invaded our shores. But eventually, the building was sold – to a medical and retail marijuana business, poetically enough – and the time was right for two guys in their mid-60s who want to spend more time with their wives and, well, do other stuff.

“Who wants to be here in the summertime?” said Gelderloos, 66, in a tone I took to be only half-joking. “I’m looking forward to it more and more.”

As for Bardolph, 67, once he learned you get full Social Security at 66, he thought, “That’s enough math for me.” 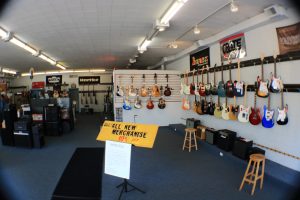 Guitars Galore: And a gathering place for musicians. (Photo/Anna Sink)

“But wait,” the weekend warrior guitarist cries. “Who’s going to dress the frets on my Strat?” Fear not: Bardolph, the “technician one” to Gelderloos’ “business one,” continues to repair and maintain guitars at Pete’s Guitar Service, a block west on Leonard.

That was certainly a relief to me, having gone to Pete for many years to keep my electrics and acoustics in tip-top shape and make the occasional repair. It was always a comfort to see him seated on his stool behind the counter, a guitar across his lap and tools close at hand like a mellow Geppetto. (“Pete, why are my frets buzzing?” “Well, you might want to straighten out that back-bowed neck, for starters.”)

I also purchased guitars at Rainbow, including my lovely Alvarez acoustic-electric, along with strings, instrument cords, foot pedals and other odd implements with which to wow fans of The Honeytones, my never-say-die band with Local Spins maestro John Sinkevics. There I also purchased my son’s first guitar and drum kit.

That kind of personal, familiar service kept countless customers loyal to Rainbow. It was one of West Michigan’s few independent music stores still standing, along with establishments such as RIT Music, Firehouse Guitars, Guitar Haven, Scott’s Music Co., Santo Guitar and a handful of others. They withstood the big-box outlets like Guitar Center and the Invasion of the Internet, where a new microphone is only a click away.

Their secret? Think “The Office,” except with salesmen who aren’t idiots.

“You offer service, that’s what it’s all about,” Gelderloos said. “And people like to see the same face when they come back a second time.”

A JUNE 12 FAREWELL FOR GUYS READY TO MOVE ON, PLAY MUSIC, VOLUNTEER

Such is the loyalty that comes from a couple of friends who grew up in a Chicago suburb, jamming joyfully on guitar (Pete) and bass (John) before coming to Calvin College. There they jammed some more in a country-rock band called Lazy and also studied some: Gelderloos majoring in music, business and finally elementary education, Bardolph a double major in math and music.

After trying sensible jobs, they hit upon the crazy idea of starting a music store.

“It wasn’t so much we were dying to be retail merchants, but this is the stuff we liked,” Bardolph said. “We were just ignorant enough to think, ‘Oh, this will be great.’”

And so on a wing and a prayer — and a loan — they opened their dream store, and lo and behold, in time it was great. 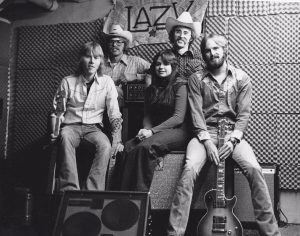 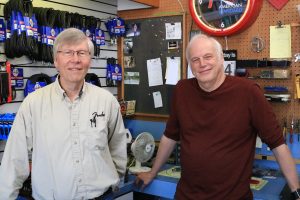 Then and Now: College pals and one-time bandmates Gelderloos and Bardolph. (Photo/Anna Sink)

The rest is Rainbow Music history, progressing through three locations on Leonard culminating in their current store, custom-designed from a former five and dime.

They reliably provided fine guitars, amps and gear through economic storms, the digital revolution and even a pandemic, when many work-idled customers finally got around to getting themselves that long-dreamed-of guitar.

“They had everything going for them,” said Domeier, 53. “John was always willing to work with you, and you always had Pete in your back pocket for whatever broke. Anything you needed, they kind of had that base covered. And it was tried and true.”

Are the partners worried about retirement? Not a bit.

Gelderloos continues volunteering at the Grand Rapids Public Museum and plans to do so at Blandford Nature Center. Pete has his guitar shop and continues to entertain fans as lead guitarist in That Beatles Thing, the first-rate tribute band where his solos on “While My Guitar Gently Weeps” are always show-stoppers. 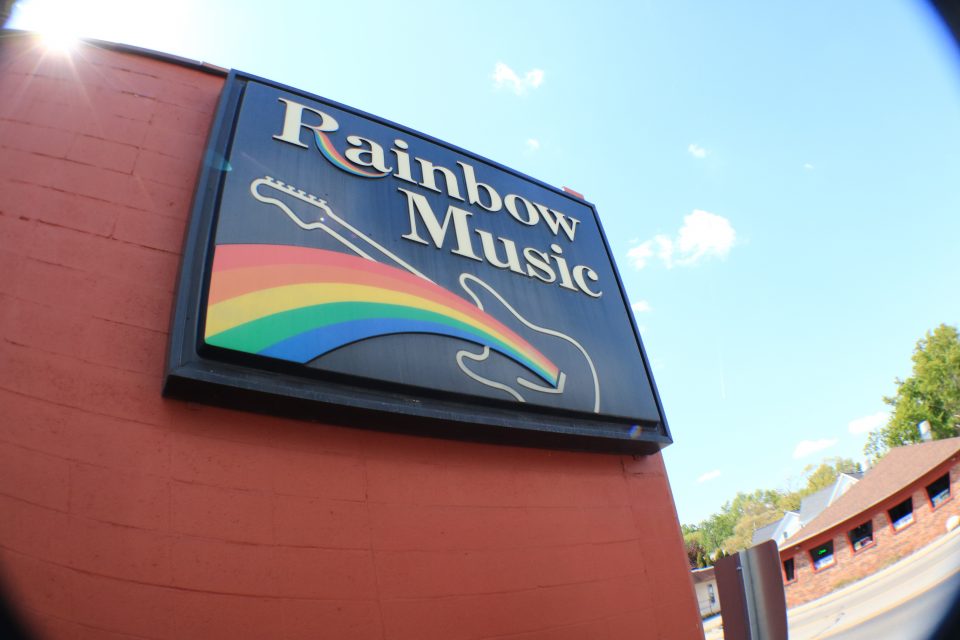 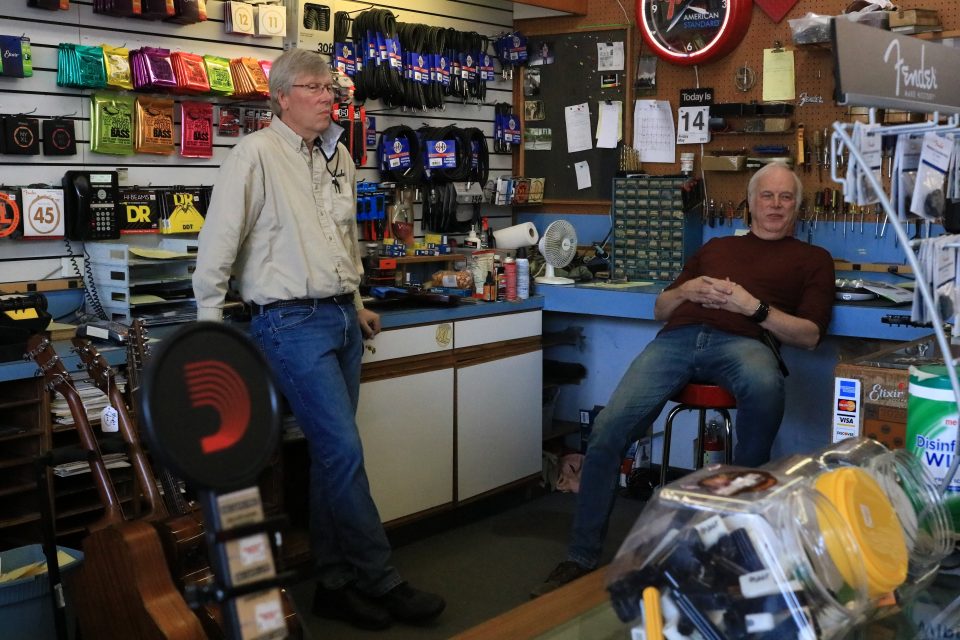 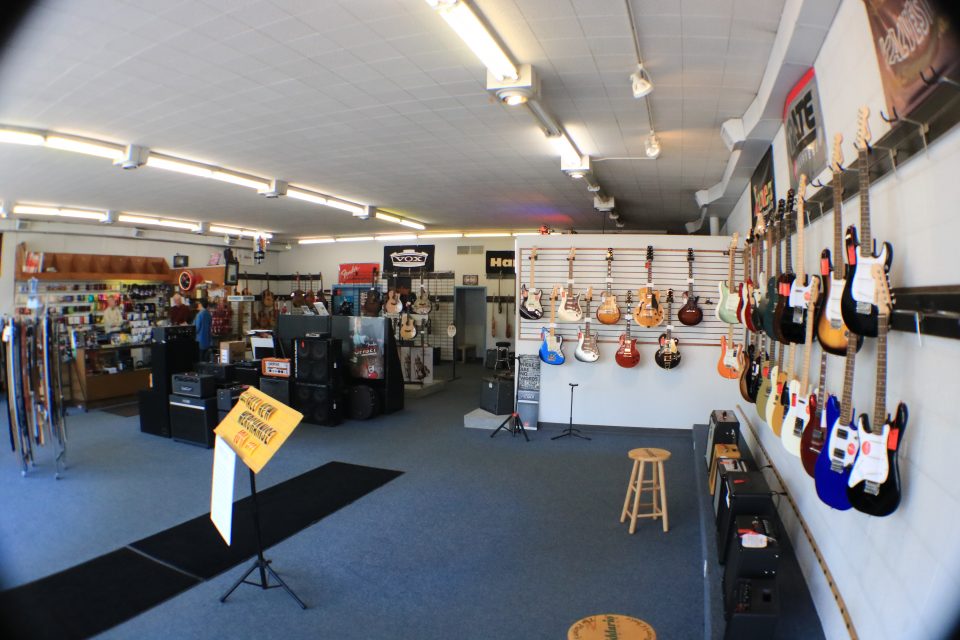 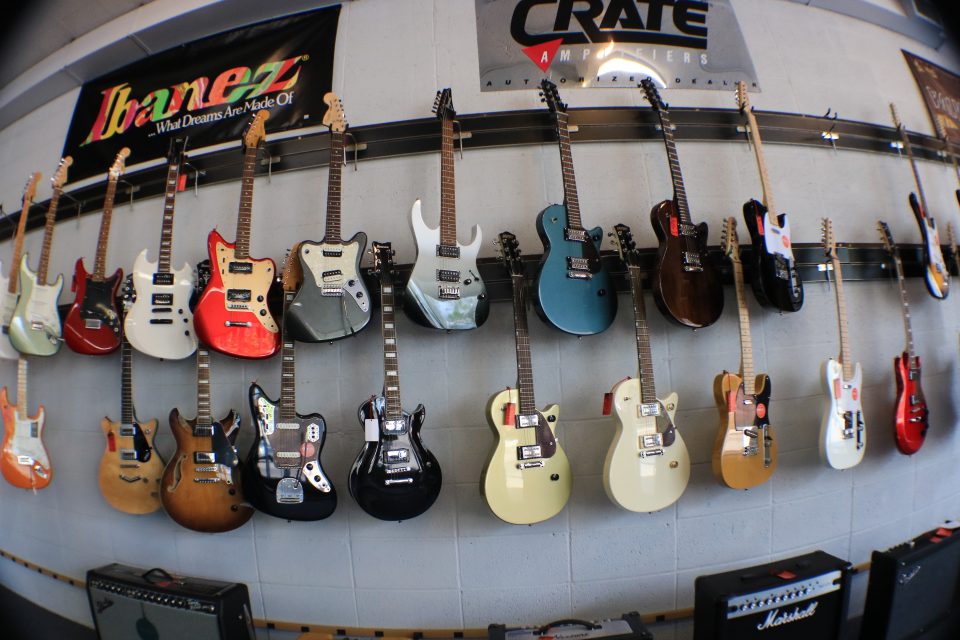 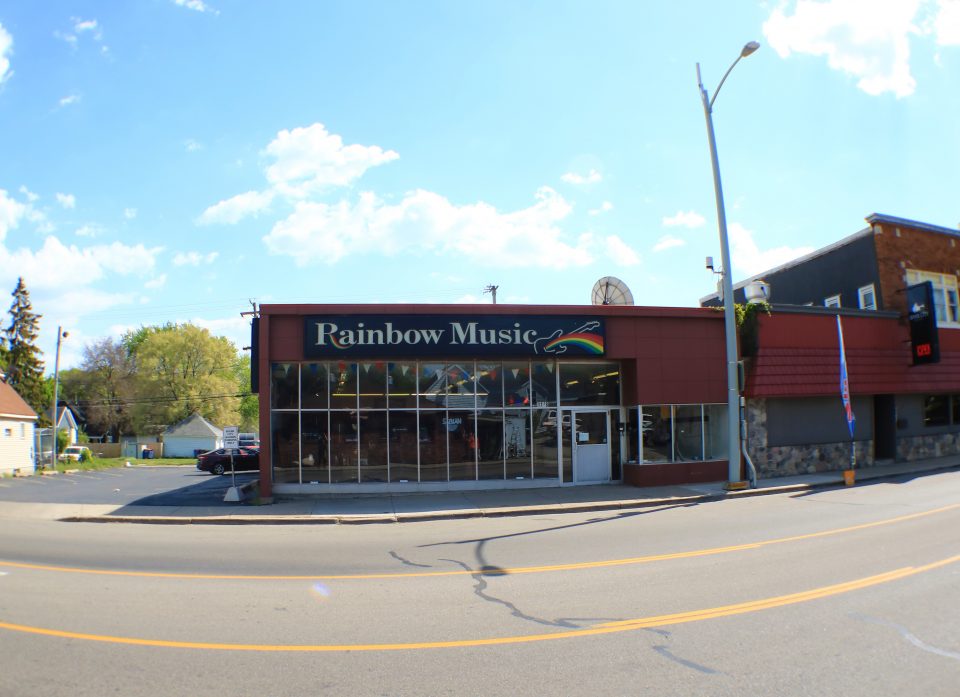 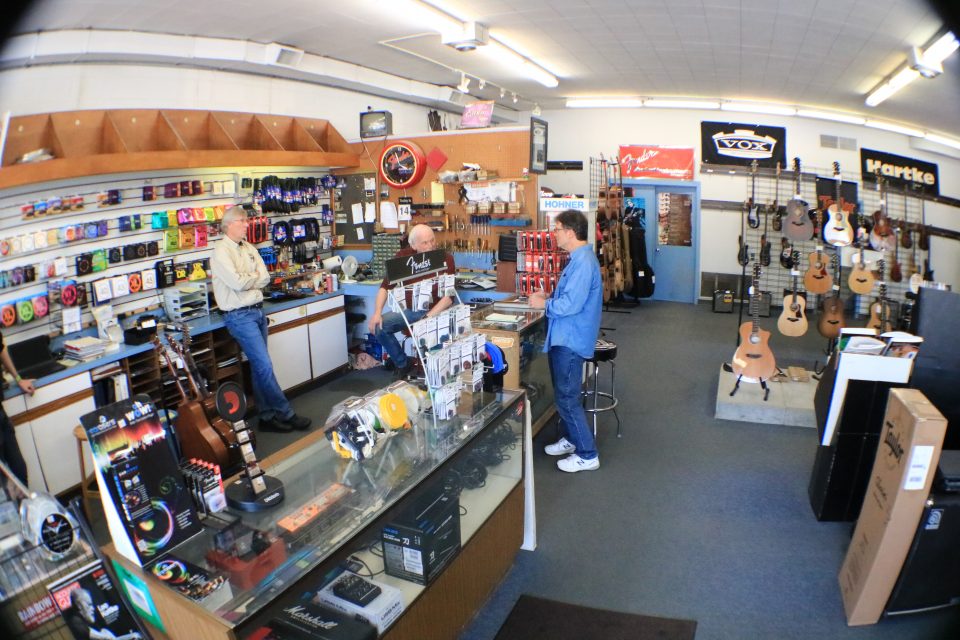 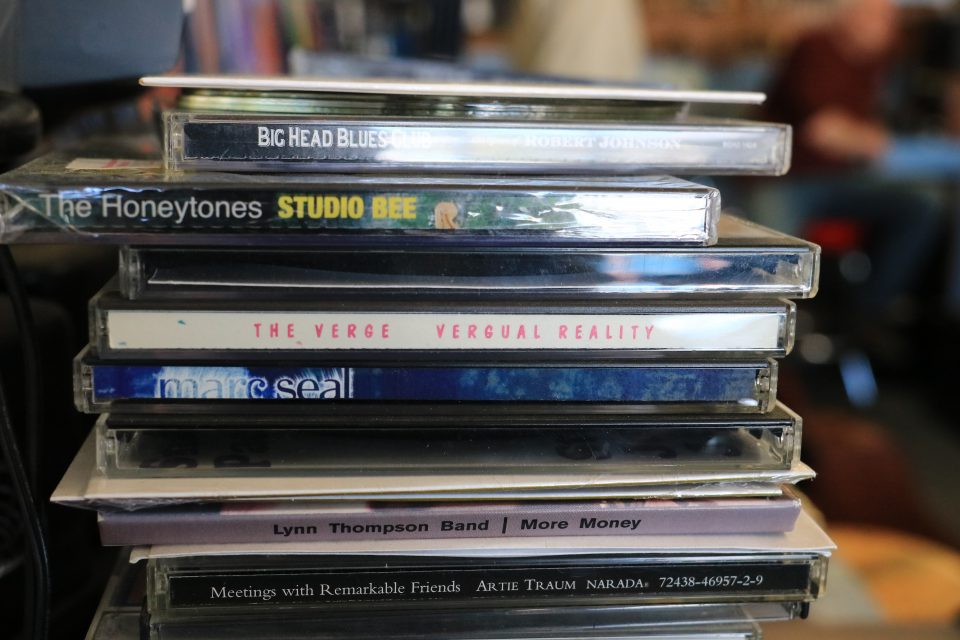 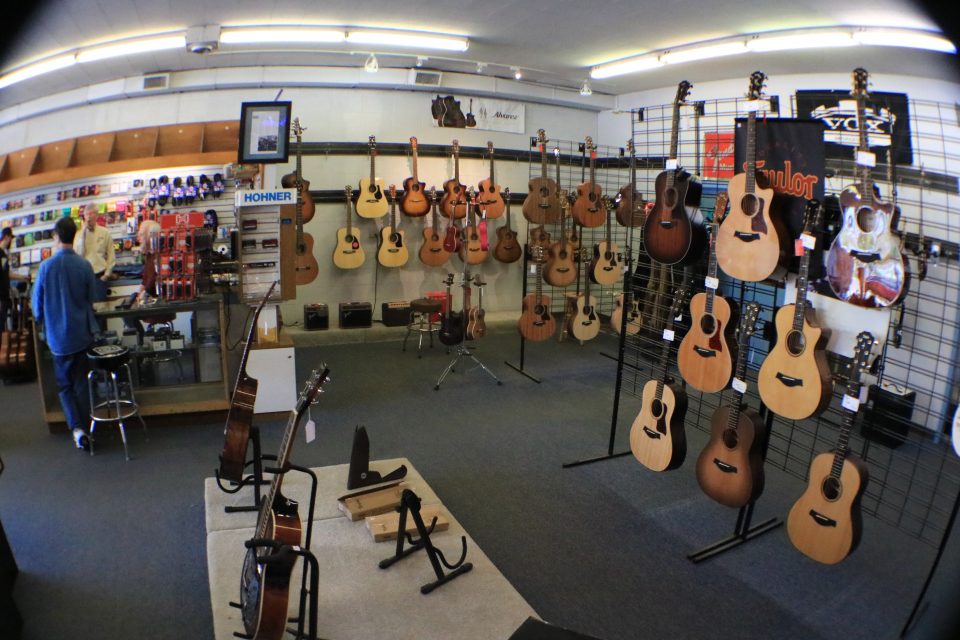 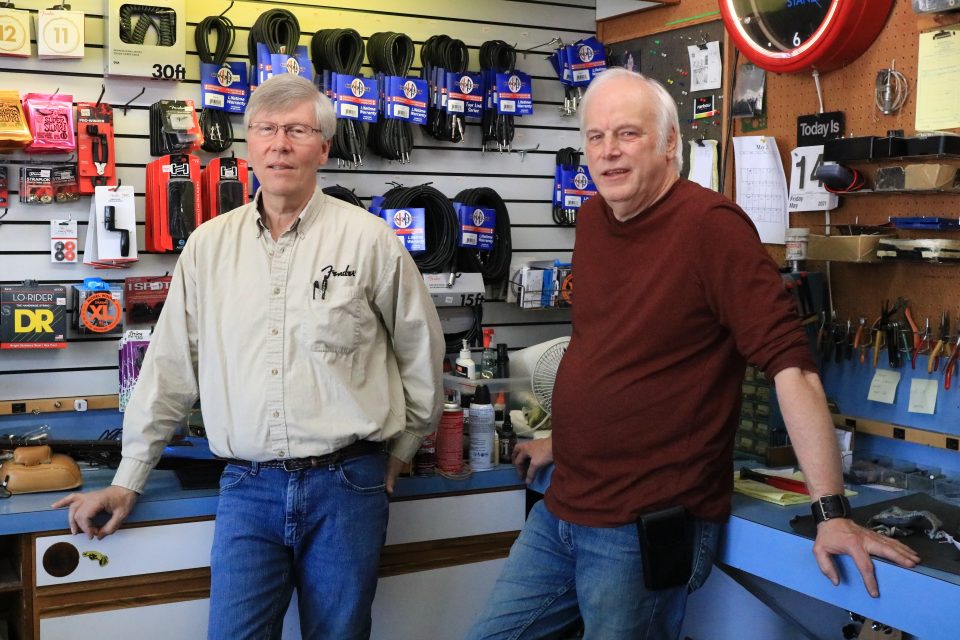 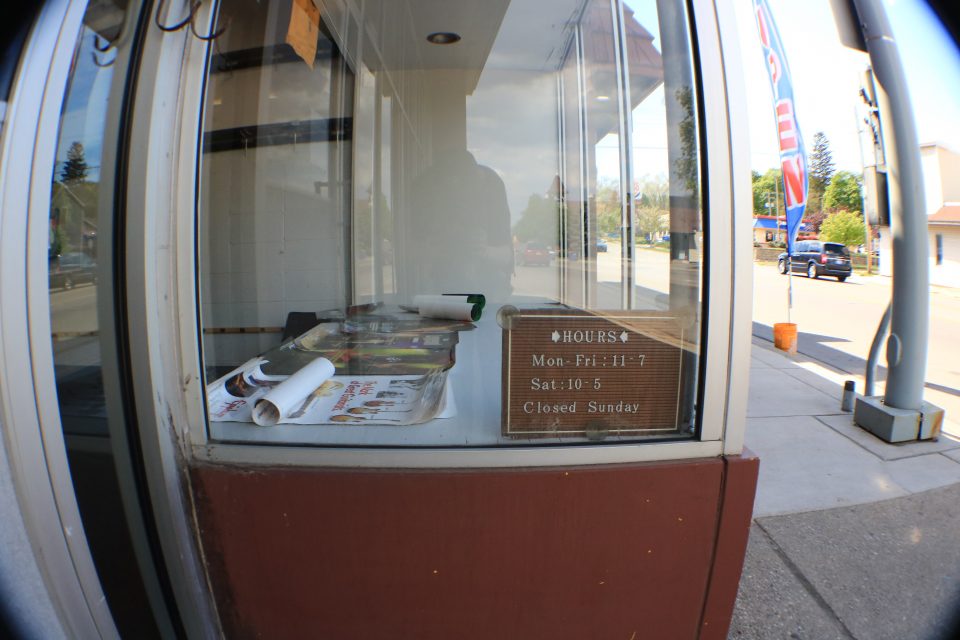 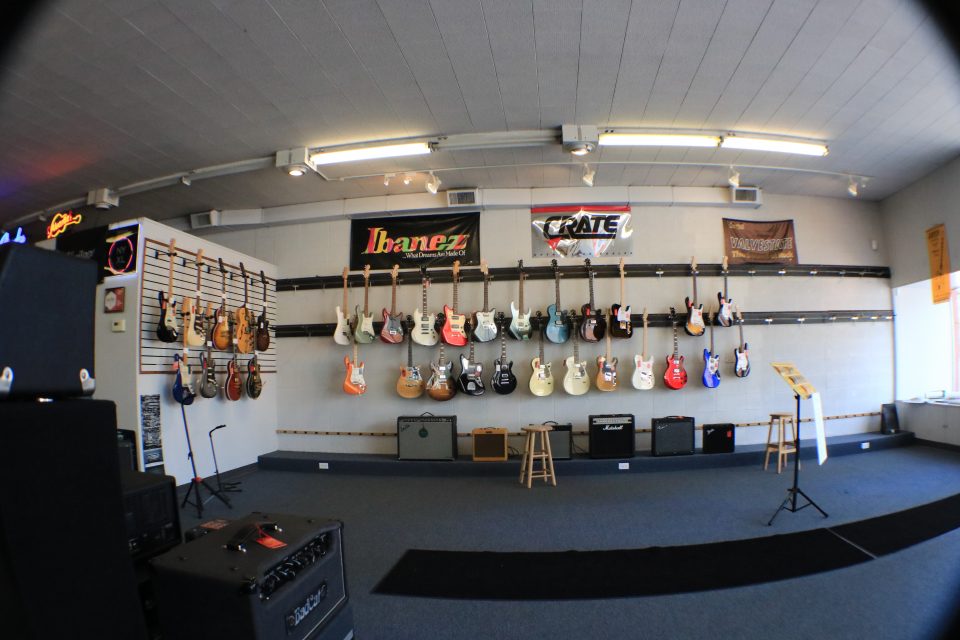 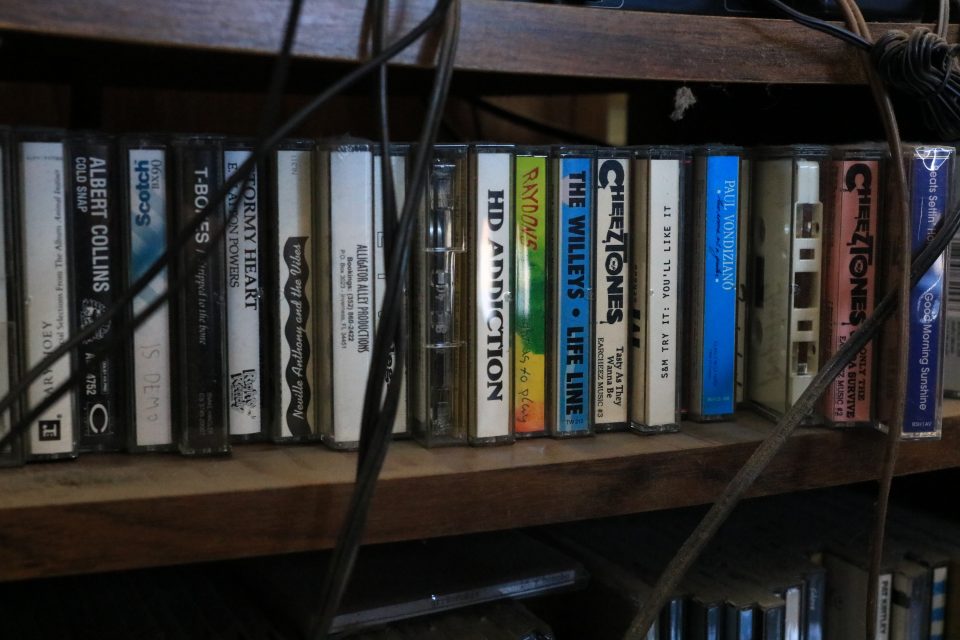 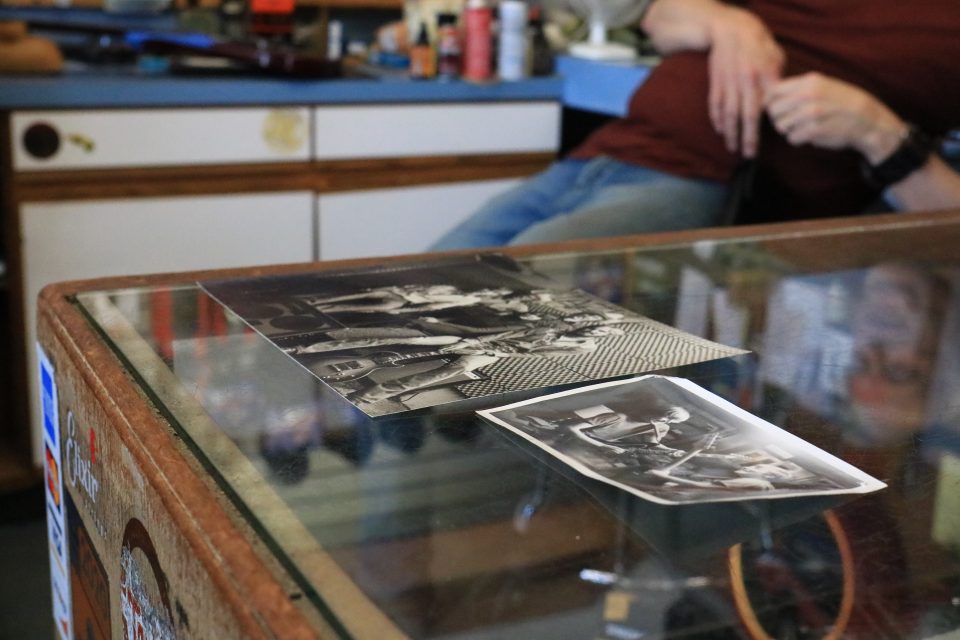 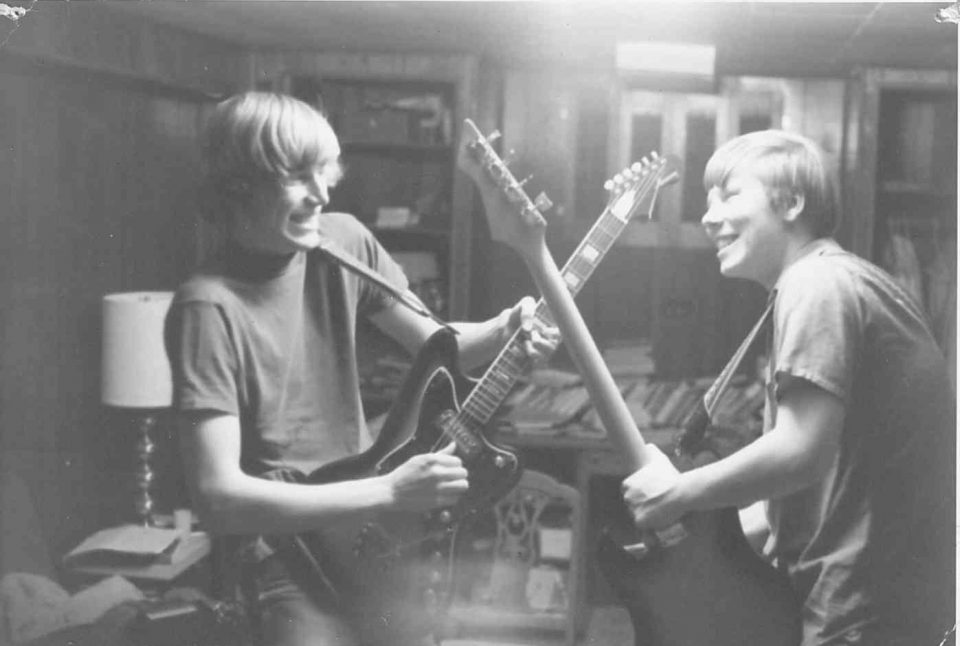 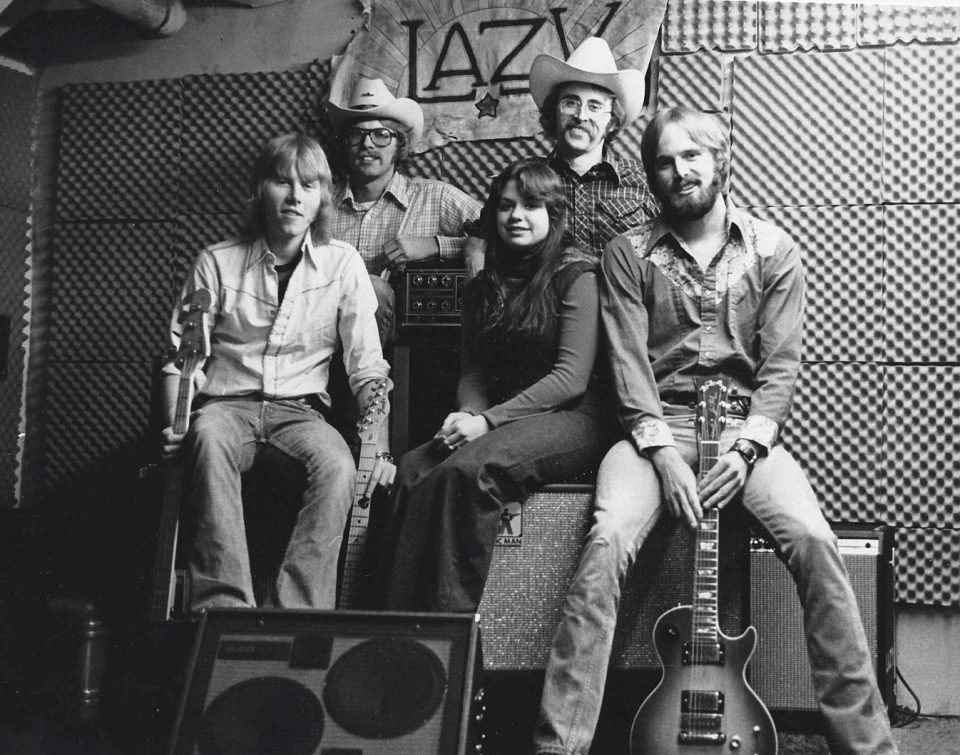 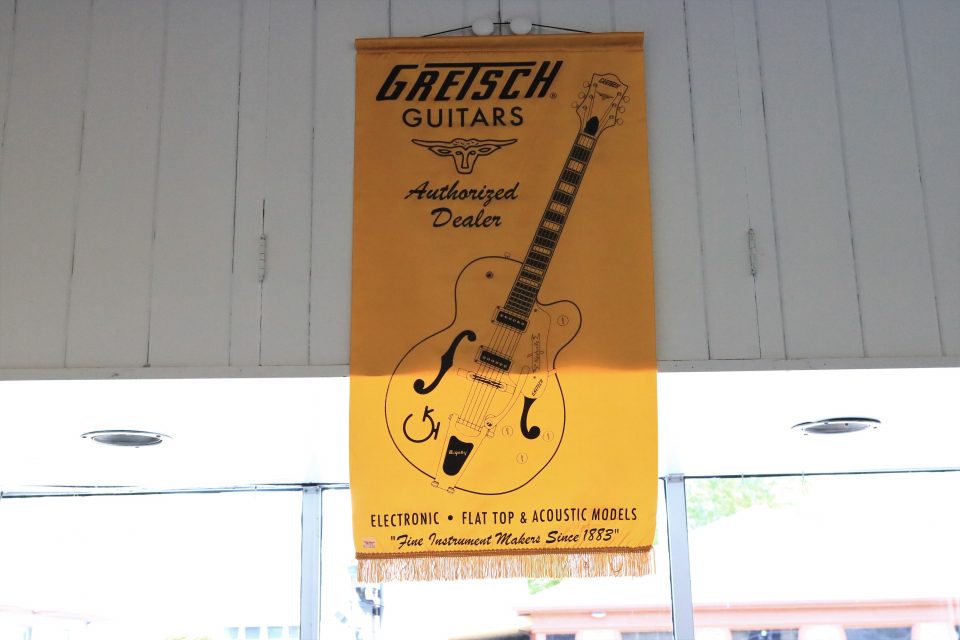 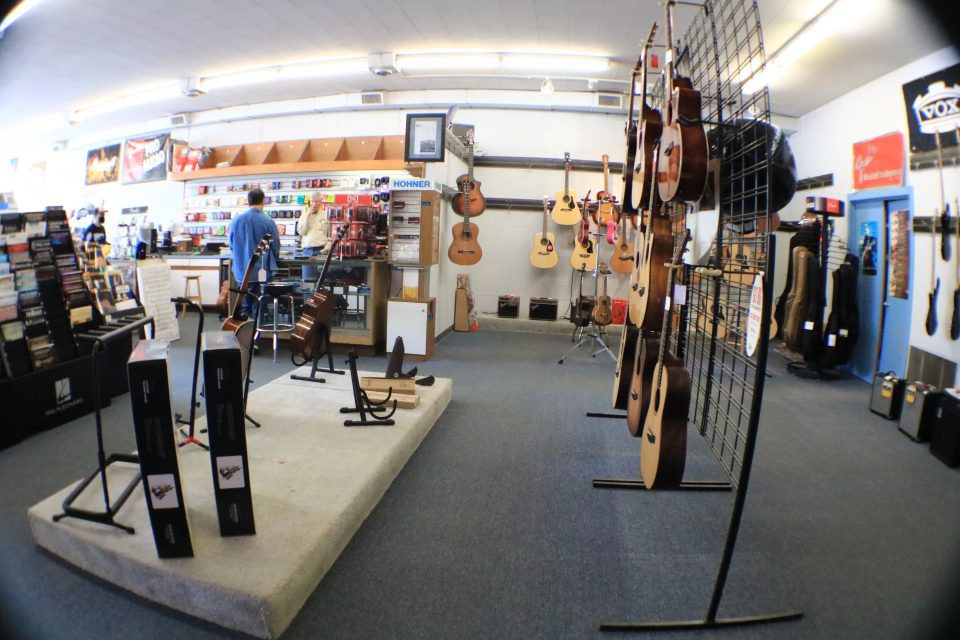 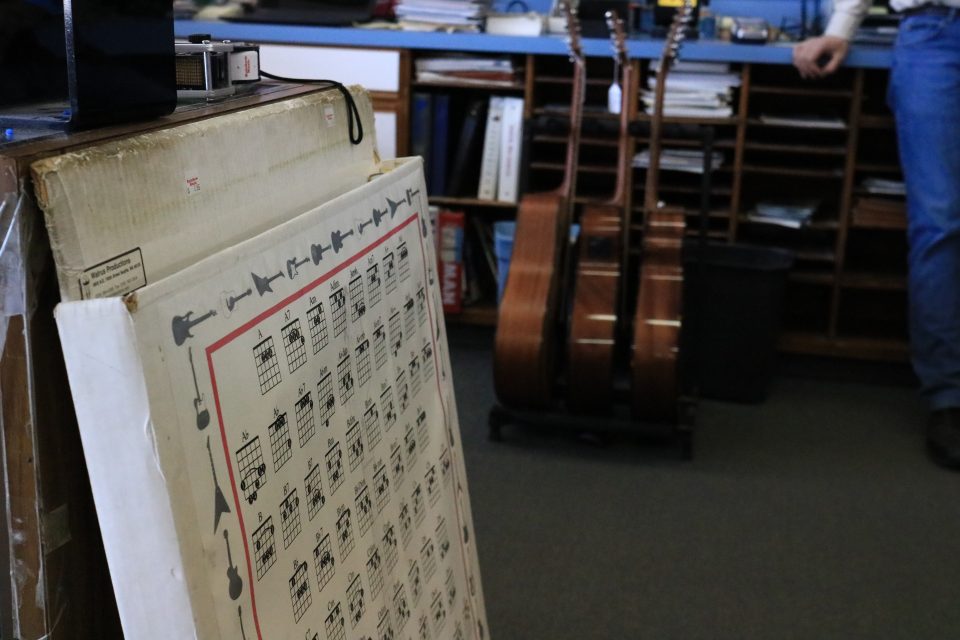 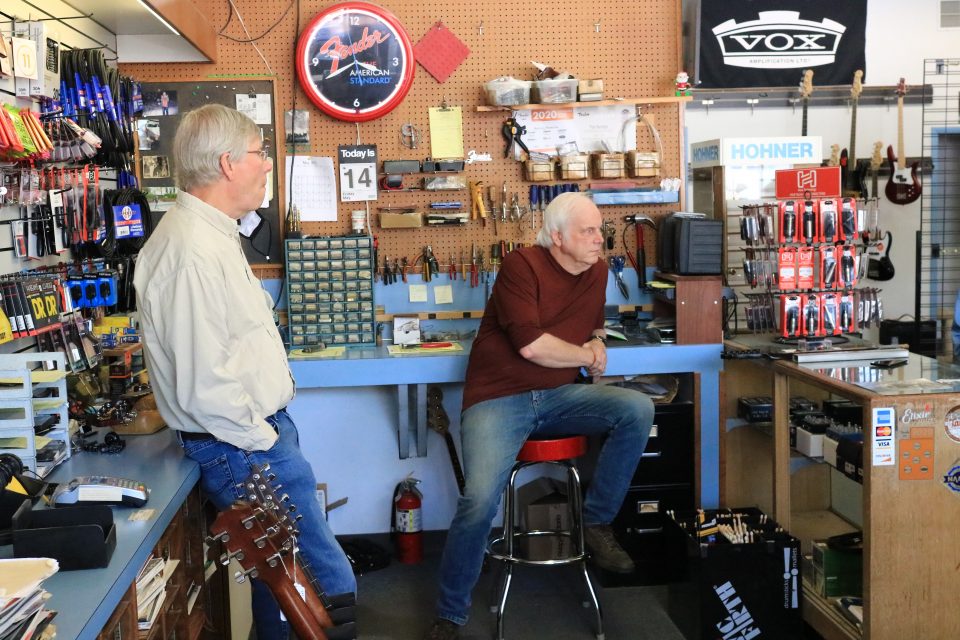 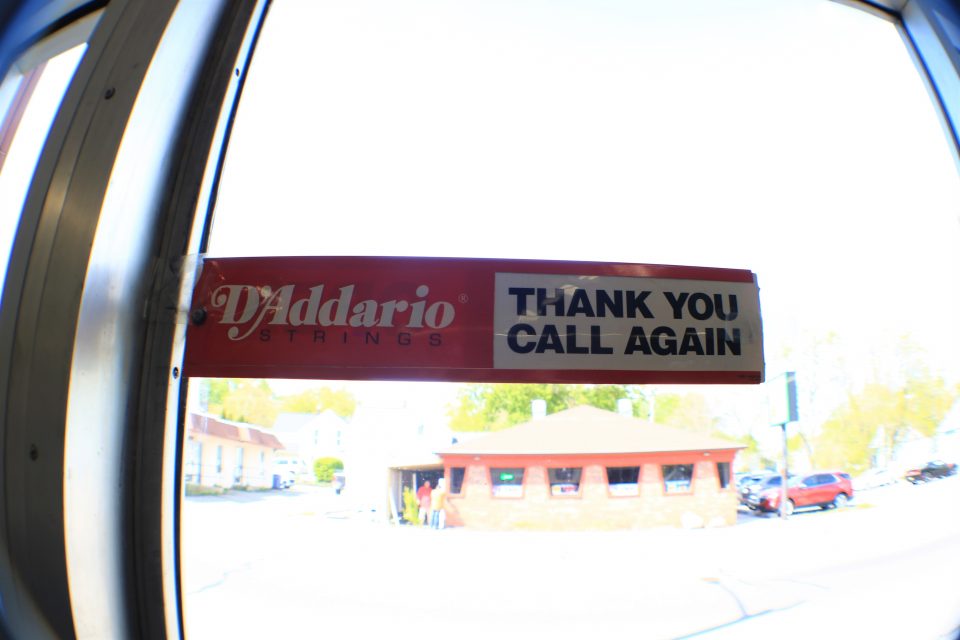