The California folk duo brings a full band – and some beautiful, sad songs – to Grand Rapids’ St. Cecilia Music Center on Thursday. We chatted with Joey Ryan, who also created a playlist for Local Spins. 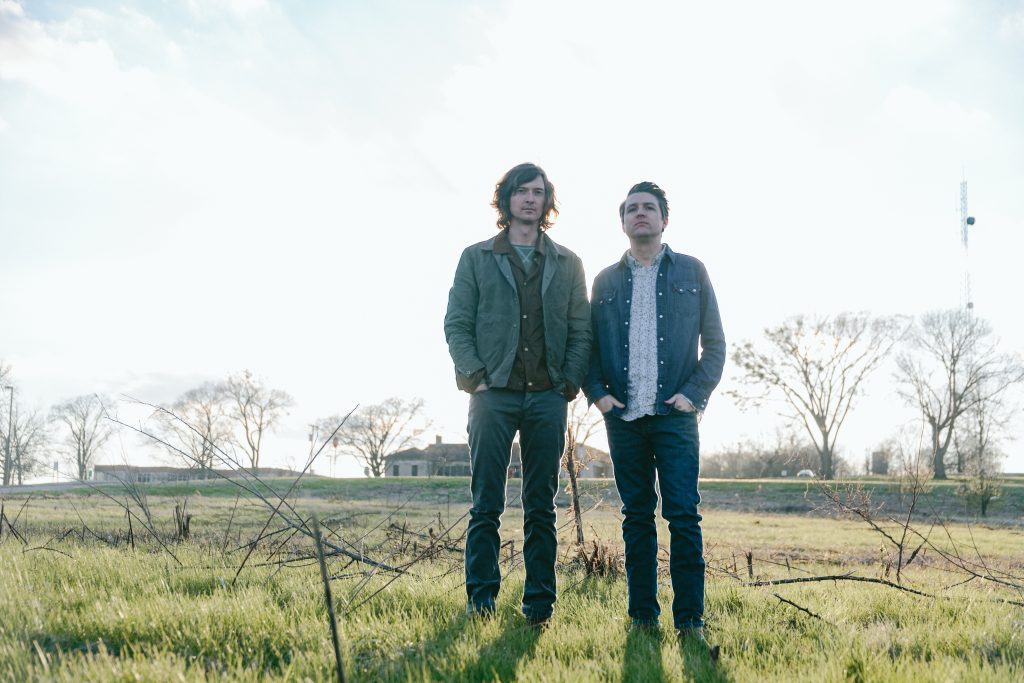 Collaborative Instincts: The Milk Carton Kids have long called on those, and bring their tour to Grand Rapids this week. (Photo/Joshua Black Wilkins)

SCROLL DOWN FOR VIDEOS AND JOEY RYAN’S SPOTIFY PLAYLIST

Perhaps it’s that “absence makes the heart grow fonder” thing, but sometimes artists have to step away from the things they love to rekindle their creative energy.

“Sonically, it’s the first time we ever worked with a producer, our hero Joe Henry, and with a band. We’d only ever made duo albums with two guitars and two voices,” Ryan said in a recent phone interview from California before heading out on a tour that will bring The Milk Carton Kids to Grand Rapids’ St. Cecilia Music Center on Thursday. 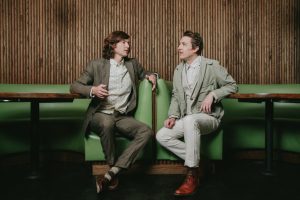 “Some days, we had 12 people in the studio recording live. Nothing could be further from what we had grown used to. It was very exciting. We had hit some sort of end to our enthusiasm for just being a duo, and now it’s been a year since we’ve recorded the album … our enthusiasm has returned. It helped us rediscover our love for performing as a duo and found validity for doing both.”

Ryan and Pattengale will perform with a full band in Grand Rapids this week as part of St. Cecilia’s Acoustic Café Folk Series. Tickets, $40-$45, are available online here. The concert starts at 7:30 p.m.

“It had been the two of us for years in rental cars and vans and in the studio,” Ryan said of the need for a change.

“We were sick of each other. The things that … we loved that were liberating about being a duo seemed to be limitations. We had said that if it ever got to that point, we would not hesitate in expanding the group. It was time to take that step. Now, we see it as another tool in our bag.”

The latest album from the award-winning duo also follows some life-altering events: Pattengale ended up having surgery for cancer (he’s now cancer-free) and Ryan is now a father of two who’s also started working as a producer for friend and mandolinist Chris Thile’s “Live from Here” radio show.

Ryan also found himself particularly troubled by the 2016 presidential election and “the tumultuous time we’re living through.”

“The songs I contributed (to the album) were actually the more politically minded songs,” he said. “My idea of what the country is fundamentally changed. I didn’t think we would ever be here and that is a much more difficult reality that you’re raising your kids here – the idea that my kids are growing up in a country that’s fundamentally different than I thought it was.” 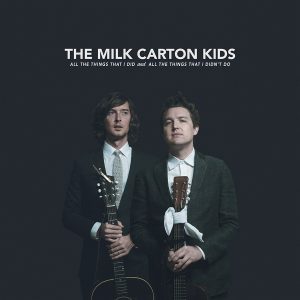 As such, songs such as “Mourning in America” come from “a very personal place. …. I tried to write my perspectives, how I feel about it, what the experience is like for me – which is the same thing I think we do when we write a love song. This is what it feels like to me. It’s sad, it’s disorienting.” (Watch the video for “Mourning in America” below.)

Being a dad also has reinforced Ryan’s view of the importance of his profession.

“It’s been very important to me to be as present as I can be as a father and also raise two kids as a musician. I want them to know that their dad is a musician,” he said, noting he’s even started writing songs with his 5-year-old. “Being a writer, being a creator is a valuable and valid thing to dedicate your life to, and to be a profession is important to me.”

Beyond that, his experience as a behind-the-scenes producer for “Live from Here” has offered a creative respite from The Milk Cartons and added to the “deep collaborative relationships” that he values.

Much of the focus for 2019 has returned to The Milk Carton Kids, with extensive touring behind their fifth studio album, hosting their second “Sad Songs Summer Camp” in New York’s Catskills with workshops in songwriting, arranging and performing, and working on new ideas.

“We feel like it’s the best album we’ve written in a long time and we’re very proud of it,” Ryan said. “It’s been out for seven months and there are a lot of cities we have not visited.”

For dedicated fans, the duo’s return to consistent touring provides an opportunity to not only embrace those sophisticated, harmony-rich songs, but cheer their dry sense of humor and thoroughly entertaining stage banter – something that’s “completely improvisational.” 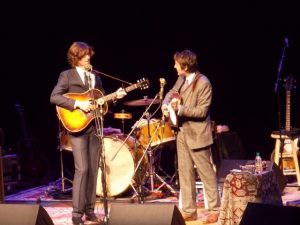 Back in Michigan: The Milk Carton Kids shown here on stage at Calvin College in 2013. (Photo/Local Spins)

“Sometimes, that thing that people laugh the hardest at are the things that we didn’t mean to be funny. Sometimes, I think they’re laughing at us,” Ryan quipped, noting it all started because he has “a compulsion to talk to the audience between songs.”

Early on, they set a firm ground rule about those chats, something that goes against the grain for most folk acts: “You can’t say the name of the song you’re about to play and you can’t say what the song is about. Otherwise, you can say whatever. People think we’re funny … which is fine with me because they seem to be entertained.”

Consequently, Ryan and Pattengale end up jabbering about grammar and punctuation, tales from the road, you name it.

Of course, off stage, before wrapping up the phone interview, Ryan did want to clarify the story behind a song that’s understandably captivated audiences in the Great Lakes State – 2011’s “Michigan.”

“We’re not from Michigan,” he said of the California-bred duo that was inspired to write the catchy-yet-laid-back song while traveling in the Mitten State.

The Milk Carton Kids have traveled many places since, and remain ready to continue this journey of musical discovery.

“We want to take this spark of collaborative instinct that merged between us in 2011,” Ryan said, “and find different ways to be artistically fulfilled by that.”

THE LOCAL SPINS PLAYLIST ON SPOTIFY BY JOEY RYAN OF THE MILK CARTON KIDS
Local Spins often asks touring artists for a current playlist of songs that have made an impression on them. Joey Ryan provided this roster of songs — some political, all compelling.