There’s an app for that: Bell’s Brewery Eccentric Café in Kalamazoo is one of the first West Michigan venues to mandate a smartphone “health pass” but more say they’ll follow suit as COVID surges. New Standard: Attending shows like this one at Bell’s will now mean using a mobile app that confirms vaccination status. (Photo/Derek Ketchum)

In about 5 minutes, it was done.

Proof of my COVID vaccination tied to my I.D. and facial recognition technology was now entered into the CLEAR Health Pass that I uploaded as an app on my iPhone.

So now, when attending concerts at Bell’s Brewery Eccentric Café in Kalamazoo, I just have to open the app and produce my “pass” with proof of vaccination at the door for entry to the show.

With a growing number of Michigan venues and national touring artists demanding that concertgoers (and photographers/media personnel) be vaccinated for admission, this high-tech portal provides a faster, more foolproof method of confirming that information for those checking tickets and I.D.s. 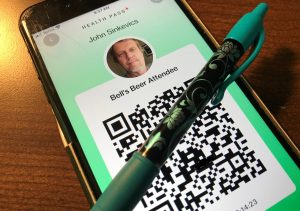 In Michigan, Bell’s recently joined the likes of Comerica Park and Detroit Metropolitan Airport in adopting the CLEAR technology as a way of confirming vaccination status. (Get details about Bell’s new policy online here.)

Val Nelson Walters, Bell’s event and concert manager, said it’s “important to us to continue to support the live music scene in Kalamazoo and adhering to safety-first policies like this will help us continue that effort.” When Bell’s first researched the possibilities earlier this year, CLEAR was “the only company available that had a simple system we could share with the concertgoers at no cost to them. Consumer privacy and security are Clear’s top priorities and that aligns with our values as well.”

It’s likely that more concert halls and live music venues will adopt this sort of methodology as they scramble to adjust to changing conditions sparked by the delta variant’s affect on COVID cases – even though the move comes with some controversy and resistance from anti-vaxxers and certain skeptical fans.

Rather than checking paper vaccination cards – which can easily be falsified, with a burgeoning black market for fake cards – and matching them with photo IDs, this touchless technology automatically confirms the vaccination and identity of those concert attendees with an app on their smartphones.

Within the past two weeks, West Michigan venues such as Spring Lake’s Seven Steps Up, Grand Rapids’ St. Cecilia Music Center and Kalamazoo’s State Theatre have adopted vaccinated-only policies for concert attendees (or proof of a recent negative COVID-19 test).

Others are enforcing the policy for specific shows as requested by performers, including Jason Isbell & The 400 Unit’s tour stop tonight at DeVos Performance Hall and several upcoming shows at The Pyramid Scheme.

BINDLE APP ALSO BEING EYED BY MANY VENUES FOR CONCERT ENTRY

Another national company, Bindle, also promotes “a secure wallet for your health records” with users similarly adding test results and vaccine certificates to the app. It’s something that Pyramid Scheme co-owner Tami VandenBerg said the Grand Rapids venues is eyeing for the future with help from the National Independent Venue Association.

“NIVA is currently pursuing a deal with Bindle. We are waiting to see how that partnership may work and will likely use Bindle once deals are all in place,” she told Local Spins.

“We are still allowing promoters and artists to decide on a show-by-show basis for now what they want to require.” 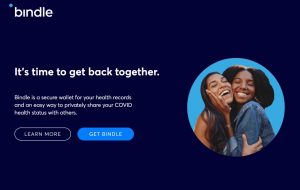 ‘Secure Wallet’: A promo for the Bindle app.

Scott Hammontree, talent buyer and partner in The Intersection, called Bindle a “great app, less hackable, all your medical information is stored on your phone.”

He said The Intersection likely will be using the Bindle app with NIVA announcing a deal with that company in coming days. “It will speed up lines and there is an option to scan a code to contact trace as well,” he added.

The Irving S. Gilmore International Piano Festival in Kalamazoo already has announced that it will require attendees to be vaccinated, and is encouraging concertgoers to download the Bindle app “to make verification easier.”

Users sign up for free. For businesses, the Bindle website proclaims that it’s “priced so even the smallest business can afford it.” The pricing is based on the number of entry passes scanned by a venue.

For those using CLEAR, signing up for the basic health pass is free via the mobile app; more advanced features that allow access to dedicated CLEAR lanes at airport security checkpoints cost $15 per month.

Representatives for CLEAR could not immediately be reached for comment, but the business’ website indicated that it has now processed 61 million “individual verifications” through its app.

The biometric screening company was launched in 2010 by Caryn Seidman-Becker (a University of Michigan alumnus and former sports reporter at the Michigan Daily) and Ken Cornick.

While some detractors on Facebook labeled Bell’s new policy and vaccination requirement as “ridiculous discrimination” and “ludicrous,” others defended the move as a show of “caring about our community.”

“While we did have some negative feedback online,” Walters said, “overall, the response has been very positive, with customers voicing they will feel safer at shows. We are happy to see our peers at the State Theatre announce the same policy this week.”

Bell’s insisted that “safety will always be our No. 1 priority for our staff and guests” and added: “Listening to our fans, artists and entertainment venues around us, we feel this next step is the safest environment for all staff, guests and performers.”