The St. Joseph multi-instrumentalist is more than halfway through his challenging beer tour. He plays Rockford Brewing tonight. Watch a video of a recent performance in Spring Lake. 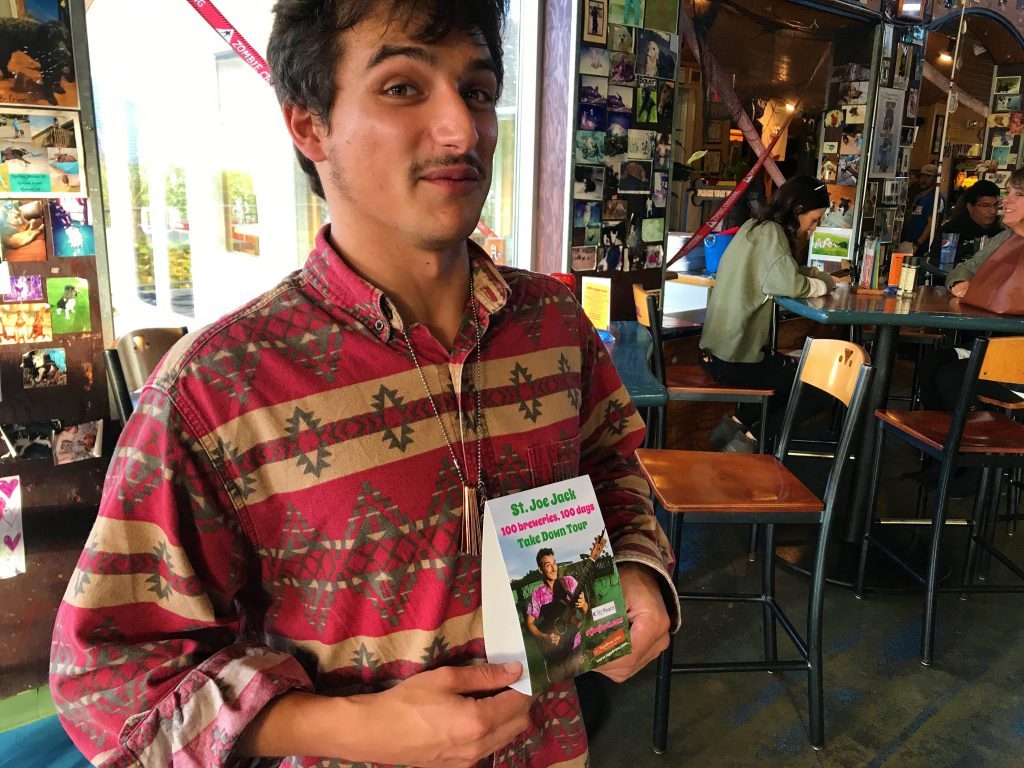 ‘Take Down Tour’: Jack Adams, aka St. Joe Jack, started his tour in August and wraps it up in early 2020. (Photo/Local Spins)

EDITOR’S NOTE AND JAN. 12 UPDATE:In January, St. Joe Jack completed his 100 breweries in 100 days tour and later posted a video showing all of the performances of “99 Bottles of Beer on the Wall” that he compiled during his journey. Scroll down for that video and one from Local Spins.

Playing 100 breweries in 100 days sounds like the perfect challenge for a beer-loving Michigan musician.

Since late August, Adams has been rolling out his one-man-band looping show and wetting his whistle nightly at brewpubs across Michigan, from Benton Harbor to Traverse City, Copper Harbor to Grand Rapids. 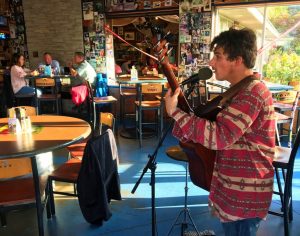 So far, that journey has covered about 6,000 miles.

Not only that, but as he counts down the days toward his goal, he has brewery patrons at each watering hole crooning a line from “99 Bottles of Beer on the Wall” to create a “traveling video” that he’s splicing together for a complete song after his unusual tour wraps up in January.

“Most of the breweries I’ve contacted were cold calls. I’ve had a lot of laughs and ‘I’ve never heard anybody doing that before,’ and general enthusiasm from whoever is on the phone.”

Scheduling consecutive shows alone can be arduous, and while most of his performances have taken place in Michigan, his tour will hit a few breweries in Canada, Indiana, Illinois and Kentucky before it’s all said and done. (Logistically, he’s also had to skip days here and there, and sometimes play more than one brewery in a single day.)

More than halfway through his “Take Down Tour,” St. Joe Jack rolls into Rockford Brewing in downtown Rockford at 7:30 tonight (Wednesday) for stop No. 56 on his audacious brewery tour, which wraps up Jan. 4 at Sister Lakes Brewing Co. east of St. Joseph. Admission to the Rockford Brewing show is free; get details online here. 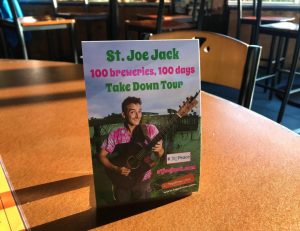 Promoting the Tour: Adams has invested a lot of time — and miles — into this project. (Photo/Local Spins)

His shows also mix covers with original tunes, enhanced by his looping ability.

“I’m really inspired by the Grateful Dead and how it’s possible to play one song 10 different ways,” said Adams, who’s played with the bands Da Breakers, Van Tassel’s Uncanny Elixir, Y-Not and others. He recently decided to take a year off from his GVSU studies to pursue music.

“Whether it’s in a different key, tempo, swing, straight, you’ll hear some of the same song, but I can bet it won’t sound like how it did last week.”

The idea for the brewery tour came while he was joking around with his family about singing “99 Bottles of Beer on the Wall” to create a fun video.

“It seemed to be a really good idea given that there’s more breweries in Michigan than I can count,” he said. “ ‘What a perfect opportunity to play music on the road? 100 breweries in 100 days,’ I thought.

“The more I mentioned it to friends and breweries, I knew I was onto something big, so I got myself in gear and started booking.”

Fans, he said, have reacted positively.

“Sometimes they know exactly what I’m doing with the ‘99 bottles’ song, and then there’s the few people that think that I’m corraling them to sing all the way down from 99 to 1 in one go,” he said. (Watch video below.)

“There’s bound to be some slow nights or maybe I’m not feeling the energy I had the night before, but through it all I don’t think I’ve been to a bad brewery yet. Sometimes a Tuesday night would be wild night because it’s ‘Mug Club Night’ and sometimes it won’t be. There’s bound to be ups and downs.” 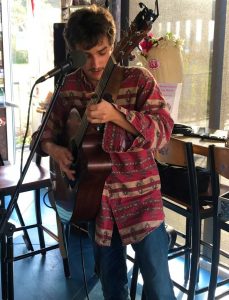 Looping and an Eclectic Mix of Music: St. Joe Jack has a diverse repertoire. (Photo/Local Spins)

But Adams loves “adapting the music to each venue” and he’s certainly had a chance to test a lot of different craft beers along the way.

“I love beer. And wow, have you seen some of the stuff that people are making these days? I would’ve been tricked into drinking PBR for the rest of my life if it wasn’t for craft beer,” he quipped.

So, how will he celebrate when he finally hits brewery No. 100 in early January?

“Besides a night out playing music and getting together with friends, I’m not sure what the plan is to celebrate yet,” he said. “Of course, there will be beer, but there ought to be something big, eh?”