After a crowd-pleasing opening set by Grand Rapids’ own Serita’s Black Rose, the legendary soul singer and his nine-piece band retraced some of Motown’s greatest hits. (Review, photo gallery) 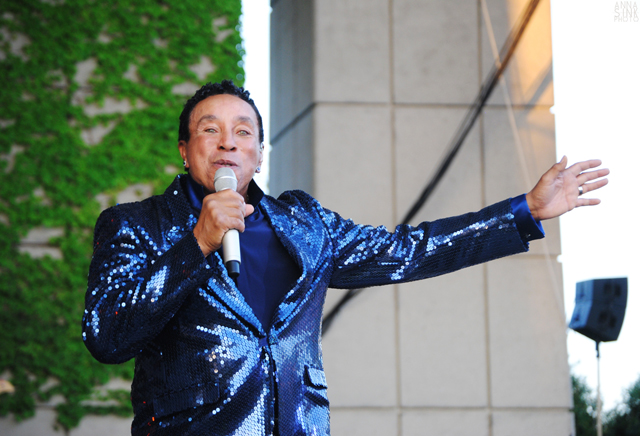 “Being With You” at Meijer Gardens: Smokey Robinson got plenty soulful on Wednesday. (Photos/Anna Sink)

It was one my childhood joys.

I raced home from the store that day clutching a brand-spanking new 45-rpm record and promptly plopped it onto the turntable in my parents’ hulking stereo console.

Smokey Robinson and the Miracles’ “I Second That Emotion” was like nothing else in my humble record collection, which at that time was filled mostly with The Beatles and pop nuggets such as The Small Faces’ “Itchycoo Park.”

As one of Motown’s principal emissaries, Robinson and his group oozed so much soul and infectious melodic charm that I became an instant fan of Detroit-driven pop and R&B – relishing the likes of Stevie Wonder, The Four Tops, Diana Ross & The Supremes, Marvin Gaye, The Temptations. 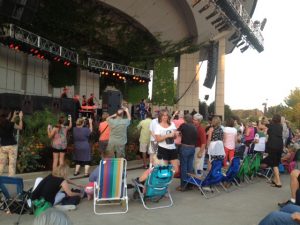 Causing a Stir: Robinson’s grand entry got the crowd on its feet and the shutters snapping.

So when the 73-year-old Robinson took the stage on Wednesday night at Frederik Meijer Gardens & Sculpture Park, more than 45 years after I first heard that 45 as a lad, it was like going home again: Robinson represents the very definition of the Motown sound and his voice still resonates with silky charm.

I didn’t have to wait long for a live reprise of that blast from my past: Robinson and his nine-piece band (including three backing singers) unfurled that No. 4 Billboard hit from 1967 as the second song of the night – a slightly under-stated rendition that was still soulful enough to get the older baby boomer crowd stoked and singing along.

It didn’t hurt matters that the perpetually grinning Robinson remains a dashing figure in tight jeans and flashy blue jacket, exuding a surprising level of sexual stage energy as a septuagenarian and commanding a voice that might not have the power it once did, but one that’s still drenched in soul and capable of impressive falsettos.

And unlike another popular soul singer who failed to hit the one-hour mark in his Meijer Gardens appearance awhile back, the Detroit native played a one-hour-and-41-minute show that spanned his lengthy career, from his early hits with the Miracles and versions of songs he helped write for other Motown artists (“My Girl,” “The Way You Do the Things You Do”) to later Top 10 singles such as 1979’s “Cruisin’,” which wrapped up the evening in extended fashion with a rousing-if-hokey audience participation segment.

Granted, the ebullient Robinson spent plenty of time telling tales from the past and chatting with the audience. For those who appreciated his Motown reminiscences spotlighting stars such as Stevie Wonder and The Temptations, it was a welcome enhancement to an expected nostalgia trip. For others who simply wanted a rapid-fire greatest hits show for their pricey $82 tickets, it may have been a distraction. 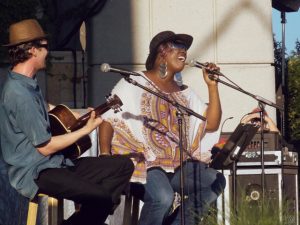 While it wasn’t a sellout, many in the crowd of 1,400 or so who flocked to the outdoor amphitheater on a hot August evening for Wednesday’s rescheduled show (Robinson originally was to make his Meijer Gardens debut in June but had to postpone due to a throat ailment) got a real West Michigan treat to start the evening: The core of Serita’s Black Rose, Grand Rapids singer Serita Crowley and guitar player Jon Hayes, opened the night with a half-hour of sweetly delivered covers and originals.

Starting with songs apropos for the sunny evening, America’s “Ventura Highway” and Seals & Crofts’ “Summer Breeze,” Crowley also uncorked some of her fiery, blues- and soul-infused vocals (her take on Big Mama Thornton’s “Ball and Chain” stood out) to pump up a crowd that responded with a hearty standing ovation.

Most in that crowd clearly were even more enamored of Robinson, the songwriter and singer who delivered literally dozens of Motown hits in his heyday, and who still exhibits masterful control of his distinctive vocals, as evidenced by Wednesday’s versions of “Ooh, Ooh Baby” and “Tears of a Clown.” This is a consummate performer who still loves to perform.

And anyone who left before Robinson and his band delivered a brilliantly arranged version of The Miracles’ signature “The Tracks of My Tears” late in the night, missed an inspiring gem and the night’s most powerful, moving moment. Most would certainly “second that emotion.”

The lion’s share of the older crowd on hand for the next-to-last Meijer Gardens concert of the season was ready to sing along to familiar tunes at the drop of a hat, even willing to applaud Robinson’s delivery of a jazz standard such as “Fly Me to the Moon.” (For that reason, the addition of a couple of dancers as obvious eye candy on several numbers seemed unnecessary.)

THE NIGHT’S BIG MOMENT
For those raised on Robinson’s music, “The Tracks of My Tears” was the obvious highlight – starting in under-stated, almost whispery fashion with audience members crooning along softly before kicking into full gear to spotlight the singer’s emotion-soaked voice.

THE BANTER
“I was there on the very first day. I grew up at Motown.” – Robinson

“They are the bomb: the tempting Tempations. I could have been a Temp.” – Robinson, in introducing an anecdote about writing the song that became that vocal group’s “first international smash hit.”

“We have heard so much about this place and it lives up to expectations as far as we’re concerned. It’s so beautiful.” – Robinson, in admiring Meijer Gardens.

“It’s gonna be hot for this one. I’m already sweating my makeup off.” – Crowley, after playing the first song in the opening set.