In a Local Spins interview, the West Michigan singer and musician says he’s ‘super stoked’ about his experience on the nationally televised show, with a standing ovation on tap. Watch the ‘sneak peek’ video. 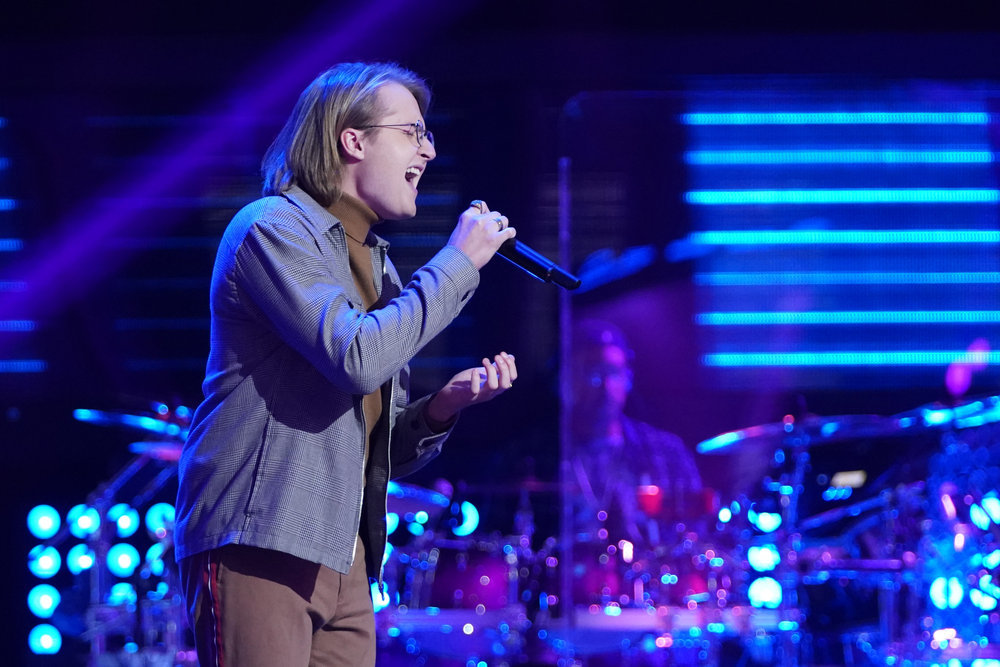 Even in the midst of a COVID pandemic that’s capsized music as we know it, singer and keyboard player Bradley Sinclair has experienced a whirlwind year.

The Rockford native – and one-time member of the bands Leland Blue and Sparkplug – not only relocated to Nashville last year to “kickstart” his music career but was spotted by talent scouts from NBC’s “The Voice” and asked to audition for the uber-popular singing contest.

The 22-year-old not only was chosen for blind Hollywood auditions in front of the show’s celebrity judges, but got two of them to turn in their chairs during his version of “Say You Won’t Let Go,” assuring he’d move onto the next round (with Nick Jonas as his coach).

At 8 tonight (Monday, April 12), NBC will air Sinclair’s performance in a “Battle Round” with singer Rachel Mac. A “sneak peek” video posted on “The Voice’s” Facebook page shows them receiving a standing ovation after their rendition of Elton John’s “Your Song.” In less than 24 hours, that video had attracted more than 283,000 views.

VIDEO: Bradley Sinclair and Rachel Mac, “Your Song” (from “The Voice”)

In a recent phone interview with Local Spins, Sinclair disclosed that the initial blind audition was taped last fall, giving him a chance to come back home to West Michigan in March to watch the performance with his family and friends.

“When I first got on the stage, I was feeling pretty good,” Sinclair told Local Spins during a recent telephone interview.

“As soon as Kelly (Clarkson) turned her chair, I had a bit of a heart palpitation. I thought, ‘It’s really happening. That’s Kelly Clarkson and she’s looking at me.”

Sinclair moves into this week’s final “Battle Rounds” with a goal to “win the dang thing” while also working on new music in Nashville with producer and songwriter Jason Wozniak. 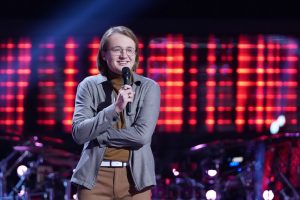 “The experience (on ‘The Voice’) itself was definitely a huge growing experience for me as a singer. I got to work with tons of great vocal coaches and musicians,” Sinclair stressed.

“The band that plays on the show is just incredible, flawlessly executing all these songs every night. … Also, they have an amazing team to help us with stuff like social media, publicity stuff, so definitely learning a lot more about the industry as a whole.”

The singer conceded there’s “a stupid amount of talent on the show” which puts him in good company.

“I’m super stoked to get the opportunity to start working with Nick and work on our next performance,” he said.

“This opportunity has been a lifechanging one and one that I’m super grateful for and blessed by.”

WORKING ON NEW SOLO MATERIAL FOR RELEASE LATER THIS YEAR

But “The Voice” is just one step forward in what Sinclair anticipates will be a robust 2021 for his career after moving to Nashville.

He’s been working on new solo material with Wozniak, a “longtime friend” and producer, with plans to release singles and videos later this year. Sinclair also has made connections and started collaborating with other Nashville singer-songwriters.

Growing up in Rockford, Sinclair started on drums and turned to keyboards, playing in various groups through his time at Rockford High School and beyond. He also plays acoustic guitar. 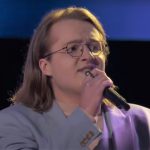 Sinclair on ‘The Voice’ stage.

Interestingly, his first experience with “The Voice” came at age 15 when he took part in “big cattle-call auditions” for the show in Chicago. He was chosen to move on to the next round, but had to drop out because the schedule conflicted with his older brother’s wedding.

This time around, he gets to share the televised success on “The Voice” with his entire family, including his parents, Dean and Sally Sinclair. During the blind auditions, NBC shared footage of family members applauding him in Rockford.

“The reaction’s been incredible. Definitely just been feeling blessed by all the friends from childhood and family members still making an effort to reach out and congratulate me,” he said.

“It’s been really cool to see the outpouring of love. My family’s reaction makes me laugh every time I watch it. I know how stoked they were to see that happen.”