This column ran before 2021’s Super Bowl, with the sad tale of the Lions told in hits by last year’s halftime performer, The Weeknd. Come back next week when we’ll do the same for 2022’s roster of halftime stars. 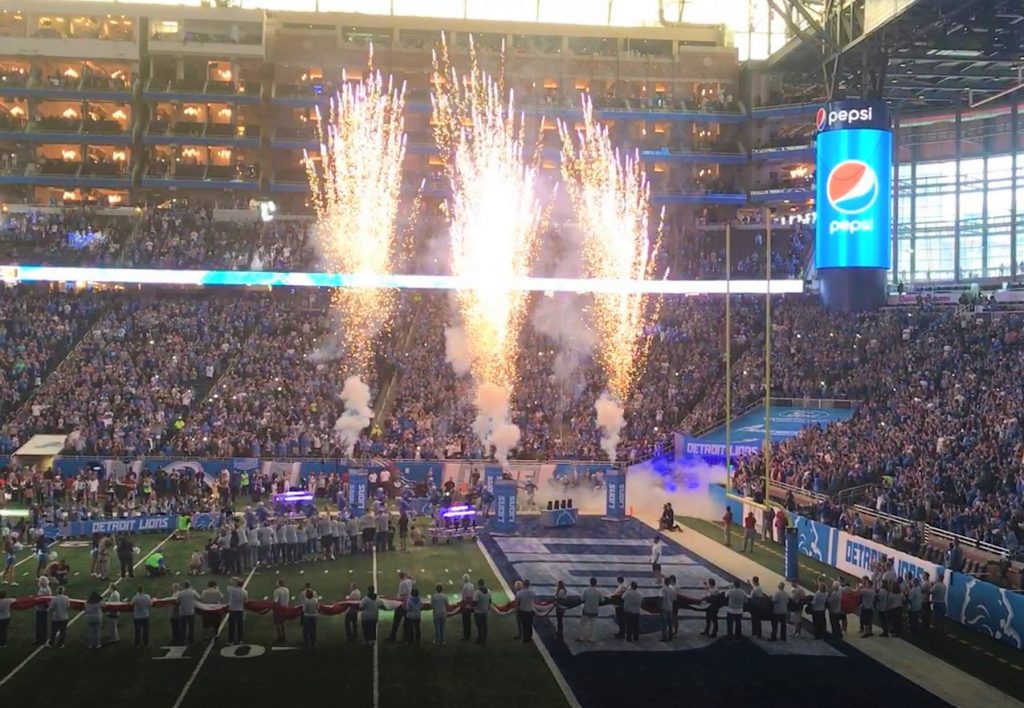 Super Bowl Despair: The only thing ever blowing up for the Lions is their season — year after year. Another soundtrack for this misery.

SCROLL DOWN TO LISTEN TO THIS 2021 PLAYLIST ON SPOTIFY

The Weeknd might not quite have the star power of The Rolling Stones or Prince or Beyonce & Bruno Mars, but he was the perfect choice for last year’s Super Bowl halftime show – especially if you’re a Detroit Lions fan.

Why’s that, you say?

Well, let’s tell it like it is: Any long-suffering Lions fan greets the arrival of the Super Bowl every year with equal amounts of shame, loathing, heartache and disgust, sort of like Cinderella’s ugly stepsister, who watches as Cindy waltzes off with Prince Charming and lives happily ever after.

Except that we’ve been watching this ballroom disaster featuring dozens of different Cinderallas every year for more than a half-century. (Editor’s Update: For 2022, there yet another Cinderella to watch with envy, the Cincinnati Bengals.)

Heck, consider this: Quarterback Tom Brady was 43 years old when he appeared in his 10th Super Bowl last February. 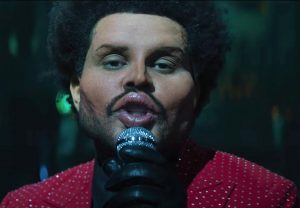 The Detroit Lions last won a football championship in 1957, 20 years before Brady was born and have won only one playoff game since. That’s unparalleled success matched against unmitigated misery that approaches statistical improbability.

And that’s where R&B star The Weeknd comes in, even though he’s from Canada which has its own mutant version of professional football that concludes with something they call the Grey Cup (which sounds about as exciting as a Michigan winter).

You see, Abel Makkonen Tesfaye, aka The Weeknd, boasts songs that tell the story of Super Bowl weekend and Lions futility in uncanny fashion.

Let’s start with the aforementioned Tom Brady, whose critics’ #MeanTweets were revealed at one point on “Jimmy Kimmel Live!” – including dissers and crybabies who tweeted, “Is there really anyone you’d rather see dipped in a vat of rendered bacon fat than Tom Brady?” and “He’s a nice guy, BUT I HOPE THEY BREAK HIS LEGS.”

Of course, as a multiple Super Bowl winner and celebrated University of Michigan alum, I’d argue that he long ago buried any doubts about his GOATness. He’s unequivocally the No. 1 QB of all-time, aka, he “Earned It” as The Weeknd sings on his 2015 hit: “You make it look like magic.”

That means Brady also frequently plays like he’s in “The Zone” – something The Weeknd also seems to know something about based on his racy 2011 track.

(EDITOR’S NOTE: I interrupt this column with a warning that most of The Weeknd’s lyrical contributions come with a Parental Advisory, something Lions fans with young and impressionable children might want to enforce to prevent their offspring from becoming, well, Lions fans.)

AND NOW TO RECOUNT ALL THAT LIONS MISERY — IN POP SONGS

So, there are your Super Bowl Weeknd Tracks No. 1 & 2 – especially meaningful for desperate Michigan Lions’ devotees who’ve lived vicariously through Brady’s teams as their second favorite all these years.

This, after many times bemoaning that the Lions actually had FIVE CHANCES to choose Brady in the 2000 draft, but instead eagerly snapped up such legendary NFL names as Quinton Reese and Todd Franz. 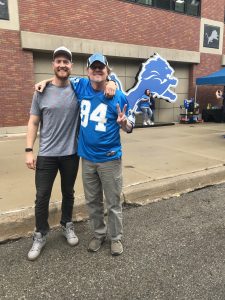 What in the Heck are They Smiling About? A pair of misguided Lions fans.

For this sad fact – and for all those NFL referees who have cruelly dropped flags on phantom penalties over the years (and picked them for a blatant pass interference call during a certain playoff game in Dallas) – The Weeknd gives Lions fans his 2020 No. 1 hit and Grammy-nominated track, “Heartless.”

And while on the subject of loyal fans who’ve blindly exhibited their “Faith” (2020 Weeknd track) in this woeful team, there’s “King of the Fall” from 2014 — and that’s “fall” as in plummeting down a cliff to an 0-16 season, not “fall” as in autumn.

Many might also say these are “Wicked Games” (2011) that the boys in silver and Honolulu blue have been playing over the past 63 years, treating loyal fans like an abused spouse: “I got my heart right here, oh, I got my scars right here.”

As dismal as it’s been for more than a half-century, things in Motown aren’t looking any better these days as they continue to challenge the patience of their 10th coach in 20 years after trading away Hall of Fame quarterback Matt Stafford who, yes, finally makes it to a Super Bowl this year because, well, he’s NOT with the Lions.

That ladies and germs, brings us appropriately to “Pray For Me” (2018 w/ Kendrick Lamar) – the ideal Weeknd soundtrack for the Lions’ Groundhog Day-like penchant for repeating failure: “Go down that road again, it’s all the same.”

At this point, I might also caution the anguished legion of Lions disciples to “Save Your Tears” (2020) because this has happened so often and for so long that it’s “Too Late” (2020) to reverse the inevitable course of football history: 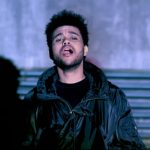 (I’m guessing those actually enduring the fires of Hades see it this way: “Things are really, really bad here, but at least we’re not Lions fans.”)

You’ve now been schooled in American football through the words and music of a Canadian who once dated Selena Gomez.

Anyway, this column is “Over Now” (2020) – just like another Detroit Lions season, which usually has fans contemplating draft picks by the end of October: