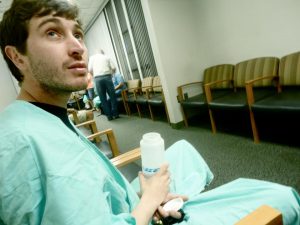 Inspiring Musical Voyage: Pat Carroll’s “Glow in the Dark” was released this week.

Starting with the lonely drone of a violin, Pat Carroll’s journey through “Glow in the Dark” is unlike any other venture by any other folk-rock artist.

Born with cystic fibrosis and undergoing a double lung transplant at age 20, the Traverse City native and Kalamazoo-based multi-instrumentalist, sound engineer and social worker spent six years on this heart-rendingly powerful and wondrously rich collection of tunes, the last part of it even as his body suffered chronic rejection of his new lungs.

With the brutal honesty and forlorn yet inspiring tack of an artist facing his own mortality, Carroll delivers a masterpiece of human frailty and passion on his Earthwork Music debut, with cleverly arranged horns, muscular acoustic and electric guitars, and desperately beautiful vocals.

Now back at the Cleveland Clinic, Carroll currently is sedated on a ventilator “because he’s not currently strong enough to breathe on his own” as he awaits a second double lung transplant, according to his partner, Samantha Cooper. Carroll’s status on the transplant list has temporarily been suspended due to serious infections. But Cooper says once these infections “are under control, they’ll lift the list suspension and he’ll be at the top of the lung transplant list.” 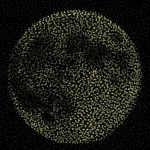 Pat Carroll, “Glow in the Dark”

In the meantime, his pals at the Earthwork Music collective have stepped up to the plate this week to promote release of the album with email alerts and listening parties, starting in Carroll’s hometown of Traverse City where some high school students performed a few of his songs.

A Kalamazoo listening party followed, with more to come in places as far-flung as Chicago, Nashville, Oakland, Seattle, Boston and Mexico City. Grand Rapids will host a house concert/listening party at 8 p.m. Sunday. Get details and directions online here.

The attention is well-deserved for one of 2013’s most important releases by a Michigan artist. As fellow Earthwork singer-songwriter Seth Bernard puts it, “ ‘Glow in the Dark’ is epic, gorgeous, heart-opening, tender, powerful and absolutely brilliant. It is such a vital work of heart and there is so much darkness in there too. I get chills and misty eyes just thinking about it.”

Carroll himself says it in even more compelling fashion on his poignant title track: “When your life leaves not even a spark, all you can do is glow in the dark.”

This is his glow.

For more information and to purchase the album, visit the Earthwork Music website here.