The Grand Rapids Southern rock band will trailer a stage to five different parking lots in Grand Rapids, Marne and Wyoming on July 18 to play its first shows since the COVID-19 pandemic began. 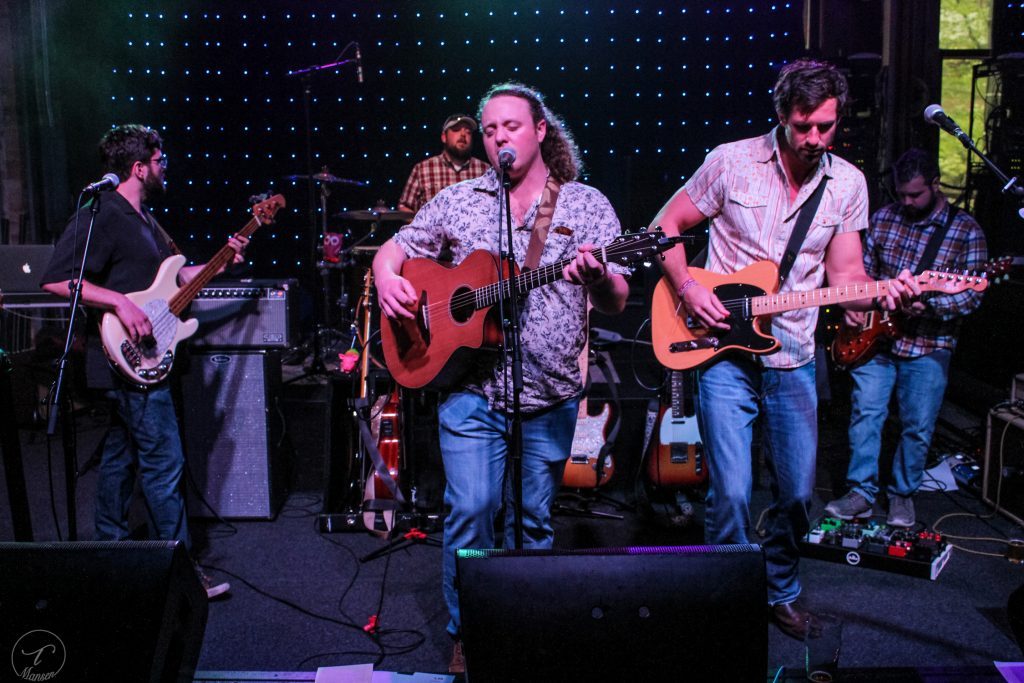 Grand Rapids’ Paradise Outlaw plans to hit the road on July 18 to play five shows in a single day after devising a unique take on touring: Their ride is the stage.

The rootsy Southern rock band’s “Traveling Road Show” will make stops at parking lots in Grand Rapids, Wyoming and Marne to put on 30-minute shows in each location. 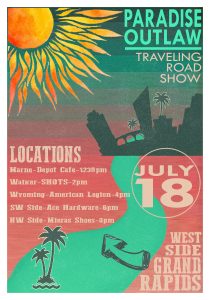 Instead of a traditional stage, Paradise Outlaw will play its sets on the back of a flatbed truck or trailer, complete with a traveling cache of sound equipment to turn the parking lots into outdoor venues.

Guitarist Kevin Langeland said the idea came from the musicians’ drive to perform music, something which has been curtailed for months by the COVID-19 stay-at-home order and continuing health crisis.

“I was just getting antsy about not being able to play shows and nobody having music,” Langeland said. “It’s my passion to play and I’ve got my band, so I was trying to think of some kind of big event that I could put together.

“Then, the more the virus stuff went on, the whole single event in one space thing kind of didn’t sound so hot. Then my girlfriend suggested the idea of us going out to other people, and I thought that was a great idea.”

Starting at 12:30 p.m. July 18 at the Interurban Depot Cafe, the tour will move to locations in Grand and Wyoming before wrapping up at Mieras Family Shoes on Leonard Street NW in Grand Rapids at 8 p.m.

“I tried to think of little pockets of neighborhoods that had a lot of people,” said Langeland, who’s from Grand Rapids’ West Side.

“I basically searched all over Google Maps on the satellite view looking for places that would have suitable lots, or an area for us to set up and play. Then I started sending out the calls and the emails and the majority of people I talked to were pretty receptive.”

READY TO ‘ROCK OUT’ WITH FUN COVERS AND MORE

Along the route from Marne to Grand Rapids, Langeland aims to fill those neighborhoods with the band’s sound. Paradise Outlaw — featuring Langeland, singer and guitarist Colin Tobin, bassist John Johnson and drummer Nate Vredeveld — kicks up Southern rock with a Michigan flair.

Langeland, who’s from Grand Rapids’ West Side, said the tour has been assembled by the band with help from friends. (Health officials have concluded that outdoor events are safer for performers and spectators as worries about the coronavirus continue.)

Although band members are a bit nervous because they haven’t performed since early this year and haven’t practiced together for three months due to the virus, Langeland said they’re still excited for the road shows. 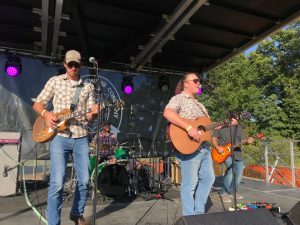 “We’re all dying to play and we’re just going to rock out,” Langeland said. “A majority of our songs we’ll play will just be fun covers we hope everybody will like to hear and enjoy and maybe dance to. We’re going to get practicing here for the next few weeks and we’re really excited for [the shows].”

All the performances are free for those who attend. “We might have a tip jar out, but we certainly aren’t out to make money,” said Langeland, who insisted he just wants to play.

For those who turn out or just hear the music as they pass by, he wants the concerts to feel like any other Paradise Outlaw show, just with some extra wheels.

“We’re going to try to be our regular selves in the fullest capacity, but just kind of in traveling mode,” he said.