The June 1 Santana show led the way in sales on a crazy first day as several hundred concertgoers lined up early to ensure they’d land spots for popular acts. Sixteen shows have now sold out. 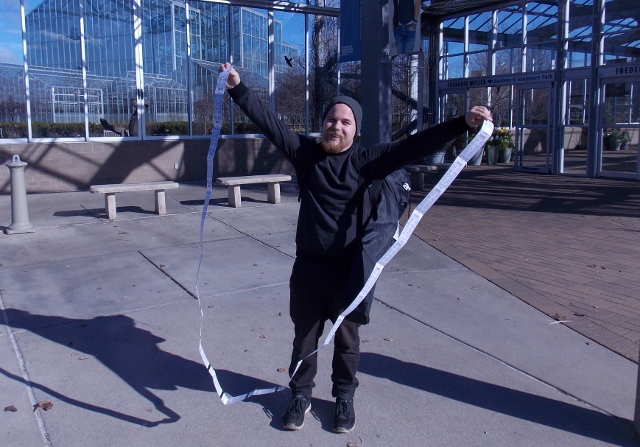 Lucky Ticket-Buyer: Nick Taylor of Sparta shows off his string of 24 tickets after arriving early on Saturday. (Photo/Local Spins)

MAY 13 UPDATE: A total of 17 concerts have now sold out, with the Gavin DeGraw/Matt Nathanson concert on July 14 selling out during the first week of public sales. The Beach Boys (Sept. 4), Ben Harper with Charlie Musselwhite (June 26) and Tedeschi Trucks Band (June 19) earlier were added to the list of sellouts that also includes CAKE (June 12), Ziggy Marley & The Melody Makers (July 2) , Nickel Creek (July 9) and Needtobreathe (June 21), which sold out the week after tickets went on sale. And Meijer Gardens officials address scalping concerns. Read below. 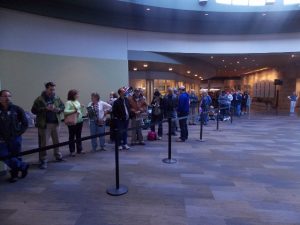 Nine summer concerts – including The Moody Blues, Jackson Browne, The Counting Crows, Sheryl Crow, John Legend, Ray LaMontagne, Barenaked Ladies, O.A.R. and Santana (the most expensive concert at $150 per ticket) – sold out in the first two hours or so of Saturday’s opening salvo of the pre-sale period reserved for Meijer Gardens members, the most ever for a first day of ticket sales. And by mid-day Monday, three more concerts had sold out: CAKE, Ziggy Marley & The Melody Makers and Nickel Creek.

Several hundred ticket-buyers lined up inside Meijer Gardens early Saturday morning to purchase tickets, some of them arriving outside by 5 a.m. to guarantee their chances for buying tickets to the most popular concerts on this summer’s schedule, which features a record 30 shows.

“We love music,” insisted Veronica Dubois of Grand Rapids, who was first in line along with her friend, Kathy Najar, intent on landing tickets for Santana, the season opener on June 1, CAKE on June 12 and others. 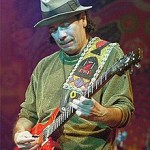 Amanda Bruehl of Grand Rapids — who was waiting much farther back in line with Andrea Melvin, hoping to purchase tickets for Barenaked Ladies, Counting Crows and several others — simply enjoyed the vibe of drinking coffee and “hanging out” on Saturday morning.

“Part of the experience is waiting in line. It’s part of building excitement for the concerts,” insisted Bruehl, who’s been attending shows at the outdoor amphitheater the past four years, including most Tuesday Evening Music Club concerts spotlighting regional acts.

Early birds certainly caught their “worms,” including a happy Nick Taylor, 22, of Sparta, who secured 24 tickets for concerts such as CAKE, John Butler Trio, Nickel Creek, G. Love & Special Sauce and LaMontagne. “It’s all worth it,” he raved.

While some members complained about problems in logging into the website, others seemed to have fewer issues in purchasing tickets online. Others expressed concern on Facebook that some of those members buying large numbers of tickets just planned to turn around and scalp them at a higher price. Indeed, later on Saturday, some tickets for Meijer Gardens shows already were being offered for sale on ticket broker websites. 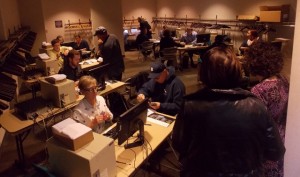 Staffers were busy handling the rush of ticket-buyers Saturday morning.

“We did receive feedback about limiting the number of tickets for our concert series,” said Meijer Gardens public relations manager Andrea Wolschleger. “We reviewed numbers this morning and despite what some are saying, we actually didn’t (have) anyone buy large quantities of tickets. Nobody even bought 19 tickets to one show.”

She added that Meijer Gardens will “continue to carefully monitor the sale of tickets. Additionally, we do not support the reselling or illegal sale of tickets in any manner or circumstance, and we reserve all rights under federal, state and local laws to refuse entry to anyone in possession of an illegal ticket.”

The pre-sale ticket period for Meijer Gardens members runs through midnight May 9, with tickets also available online through StarTickets.com and by phone at 1-800-585-3737 (with handling fees). Get information online here.

Ticket sales to the general public begin at 9 a.m. May 10.

For the full 2014 schedule and details about this year’s concert series, check out this Local Spins story.