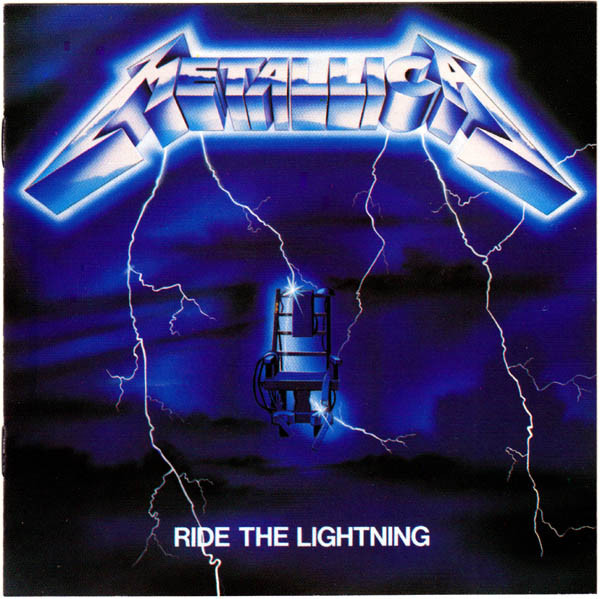 ‘Ride the Lightning’ and Riding Into Town: Metallica’s second studio album produced more than one track on this ultimate playlist.

Metallica brings its “WorldWired Tour” to Van Andel Arena at 7:30 p.m. Wednesday (with Jim Breuer’s Light It Up pre-show). The show is sold out but resale tickets are available online here.

SCROLL DOWN TO LISTEN TO THE ENTIRE PLAYLIST ON SPOTIFY

As Local Spins’ Official Metal Correspondent and a graying headbanger whose psychological course changed significantly upon hearing “Master of Puppets” for the first time, I greatly relish any opportunity to see Metallica live. This, despite the reality that they’ll never play the perfect set, inevitably peppering it with songs from the era in which they cut their hair and played “the blues” (insert woofing sound here), as well as a Megadeth tribute medley and large swaths of “Lulu.”

Anyway, in the spirit of giddy, nostalgic anticipation prior to the Greatest Metal Band Ever (besides maybe Iron Maiden or Black Sabbath or Motorhead) returning to my local hockey barn, I painstakingly curated a set list for Metallica to follow, all in the selfless interest of saving them the time and trouble.

They’re currently playing 18 songs, which I stretched to 19, because you paid a lot of money for that ticket. I fully acknowledge that it might kill them (I didn’t time the set; do I look like a maniac?), but it would be killer for us. So love this set list or pose forever.

1. “Creeping Death” from “Ride the Lightning” (1984) – Why not open the show with the greatest set of metal riffs ever assembled, and fire up the crowd by leading a rousing chant of “Die! Die! Die! Die”? Best foot forward, my brothers and sisters of metal. Best foot forward.

2. “All Nightmare Long” from “Death Magnetic” (2008) – “Death Magnetic,” officially the most underrated Metallica album, and their best since “…And Justice for All” (don’t protest; I will FIGHT you), is a mega-stacked Vegas buffet of sumptuous riffs, an embarrassment of riches via Hetfield’s immaculately conceived right hand. Listen to these riffs. Nobody else plays like that. Nobody. Show ’em you’ve still got it, James.

4. “Hardwired” from “Hardwired … to Self-Destruct” (2016) – Yep: Time to hit the oxygen tank. Inhale, exhale, introduce the newest album, then play its most gregarious track. I understand how this works — the most recent release must be represented, no matter how mediocre it may be. There are units to be shifted.

5. “The Shortest Straw” from “… And Justice for All” (1988) – OK, back to the old shit! Metallica never shies away from a deep cut, and this tough-as-nails gem from “Justice” is a hard-charging hot blast of cold steel, or something similarly hyperbolic.

6. “Ain’t My Bitch” from “Load” (1996) – The “Load”/”Reload” era will be represented with a single track of acknowledgment. This is a ridiculous hang-banger-burger-barn-burner of dumbass AC/DC downtuned thuggery garnished with a loony Hetfield vocal performance (James-ahh! JAMES-AHHHH! HA HA HAH. YEAHH). It’ll reach the back row then punch through the wall and slam headlong into traffic on Fulton St.

7. “Cyanide” from “Death Magnetic” (2008) – Another “Death Magnetic” cut, because I said so. “Cyanide” is a labyrinth of prog-thrash, goofy and exhilarating, boasting an arrangement that flips upside-down and turns inside-out in terrifically eye-goggling fashion.

8. “Motorbreath” from “Kill ‘Em All” (1983) – I know. I’m picking all fast ones. You telling me you want to hear Metallica play slow? That’s what I thought. Not only is this one really fast, it’s really old, from “Kill ’Em All,” an album where James sometimes sounds like an angry prepubescent speed-metal chipmunk. He doesn’t sound that way anymore. He’s 55 now. Are you that far behind him? You’re not slowing down, are you? Didn’t think so.

Time to release that last beer you drank which you shouldn’t’ve because the set has been so amazing you didn’t dare leave, so you just held it. The break includes a moment of silence for “St. Anger.”

10. “Welcome Home (Sanitarium)” from “Master of Puppets” (1985) – This ain’t a power ballad. It’s Metallica pumping iron. Building, building, building, then exploding with a display of razor-sharp neck-snapping thrash. Heads will bang and arenas will crumble.

12. “Blitzkrieg” from “Kill ‘Em All” (1983) – Part two of the “Garage Days Revisited” mini-set of NWOBHM covers, acknowledging those who headbangeth before them.

13. “Fade to Black” from “Ride the Lightning” (1984) – The moody portion of the set begins with their quintessential power-thrash ballad, a masterwork of classic metallic dynamics. Face it: nobody wants to hear “Nothing Else Matters.” They want to hear this.

14. “Orion” from “Master of Puppets” (1986) – “Fade to Black” segues into this epic instrumental, as contemplative as it is muscular, and rife with emotive guitar solos. It was composed in part by the dearly departed Cliff Burton, gone way, way too soon. They should play it every night in remembrance of the bellbottomed bassist — metal’s greatest? — who never, ever would have let them write every song they recorded in the ’90s.

15. “Dyers Eve” from “… And Justice for All” (1988) – The first set concludes with a savage ripper they hardly ever play live, possibly because doing so might make Lars Ulrich spontaneously combust on his drum stool, Spinal Tap-style.

16. “Enter Sandman” from “Metallica” (1991) – Of course, this song wore out its welcome after a while, being as ubiquitous as wet on water. But objective reality dictates it must be played to satisfy the mass legions of formerly (and some still) mulleted heshers who paid $73 just in service fees to be there, and are contemplating whether they’ve drunk enough $9 beers to cloud their judgment and buy a $45 T-shirt.

17. “One” from “… And Justice for All” (1988) – The slowly percolating tension of this morose epic never fails to conjure goosebumps. It begins somber, swells to outright rage and ends with righteous release. Oh, and this story of a man deprived of all his senses and forced to suffer very quietly and internally is, for thematic constancy, presented live with an array of pyro, wartime sound effects and hyperkinetic lighting.

18. “Seek & Destroy” from “Kill ‘Em All” from 1983 – A classic. I appreciate the irony of playing this late in the show, since by then, Metallica will have already sought and destroyed.

19. “Damage, Inc.” from “Master of Puppets” (1986) – The closer from the greatest heavy metal album of all time, “Master of Puppets,” should close every Metallica show. It rages hard, it rages mighty, it leaves us wiped out. Fin. Lights. File out. Go home. Bed. Hangover. Damaged. Happy.

THE ULTIMATE LOCAL SPINS PLAYLIST BY JOHN SERBA ON SPOTIFY