As Meijer Gardens gets set to kick off its 15th season of summer concerts this weekend, Local Spins takes a gander at some of the best shows ever held at the amphitheater. What are your favorites? 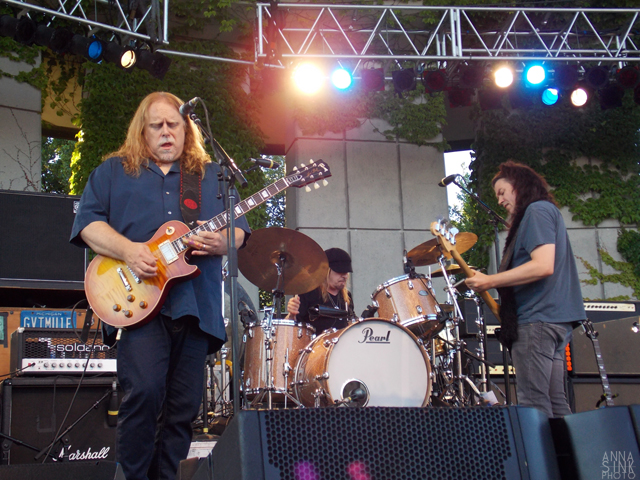 On the Top 10 List and Back Again for 2017: Warren Haynes and Gov’t Mule on stage at Meijer Gardens. (Photo/Anna Sink)

EDITOR’S NOTE: At 6:30 p.m. Sunday, Frederik Meijer Gardens & Sculpture Park kicks off its 2017 season of concerts with the “Replay America” tour featuring Billy Ocean, Starship with Mickey Thomas and Taylor Dayne. With 30 summer shows ahead, it’s the perfect time to look back at some of the best shows ever held at the outdoor amphitheater. By the way, tickets are still available for Sunday night’s show online here, where you can also find the full schedule of 2017 concerts.

Five years ago, as Frederik Meijer Gardens & Sculpture Park launched its 10th season of outdoor amphitheater concerts, I opined somewhat definitively about what I considered the 10 best shows in the history of the series.

Funny how memories change over time. 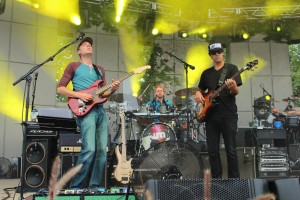 Looking back at that list and what’s transpired over the intervening five seasons, I’ve reshaped my view of certain performances, while others remain firmly entrenched as outstanding concerts.

It’s not that my original list was flawed (OK, others might disagree), it’s just that time has a way of altering one’s perspective, not to mention that five years of concerts after that 10-year milestone — about 150 of them — have added to the inventory of memorable shows.

For instance, I originally had Umphrey’s McGee’s 2010 concert at No. 9 on the list, but the band’s return to Meijer Gardens in August 2015 was absolutely epic – a sold-out, once-in-a-lifetime experience that frankly blew their 2010 appearance out of the water (thanks, in part, to an ebullient crowd that transformed Meijer Gardens’ outdoor amphitheater into a hippie-fest).

So, as another season of amphitheater concerts kicks off this weekend and with the caveat that I may have missed a few classics in recent years due to work conflicts, I’m taking another crack at the Meijer Gardens Top 10 (which, you’ll see, really “goes to 11”). Feel free to add your own favorites in the comments below.

1. David Byrne & the Tosca Strings, 2004: This concert amid the series’ second year was chock full of unexpected musical pleasures thanks to an unusual partnership that produced fun, musical sparks, including a marvelous, re-tooled version of The Talking Heads’ “Life During Wartime.” Byrne essentially matched that vibe upon his return to Meijer Gardens in 2013 with the highly acclaimed St. Vincent.
The Review (Byrne/St. Vincent): https://localspins.com/david-byrne-and-st-vincent-blossom-in-luminous-meijer-gardens-concert/ 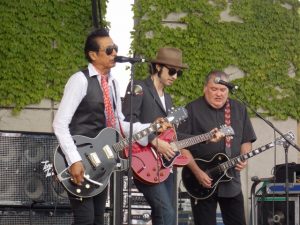 2. Elvis Costello & the Imposters, 2011: On my previous list, I suggested that the more I looked back at this concert, the better it got. And it has, moving up to No. 2 on my roster of faves (possibly because I’m looking forward to Costello’s return to Meijer Gardens with The Imposters on July 17). Even though keyboardist Steve Nieve fell ill midway through, Costello and crew’s audience-involving “Spectacular Singing Songbook” roulette wheel turned the night into a deliciously entertaining game show.
The Review: http://www.mlive.com/entertainment/grand-rapids/index.ssf/2011/06/elvis_costello_unexpectedly_un.html

3. Los Lonely Boys, Los Lobos, Alejandro Escovedo, 2013: I still have fond memories of the truly magical Los Lobos/Los Lonely Boys’ 2008 show that ended with fans dancing on stage. But thanks to Alejandro Escovedo’s rollicking rock ‘n’ roll show that kicked things off in 2013, this triple-header of monumentally entertaining Mexican-American marvels takes the cake. (Speaking of CAKE, see the Honorable Mentions below.)
The Review: https://localspins.com/alejandro-escovedo-los-lobos-and-los-lonely-boys-triple-the-rock-fun-at-meijer-gardens/

4. Umphrey’s McGee, 2015: As I walked into this concert, a security guard told me that the hippies had taken over and they decided to just leave them alone. Good thing, because these colorful UM devotees helped create an upbeat atmosphere that helped inspire this Chicago-area prog-rock/jam/funk outfit to uncork the best performance I’ve ever seen by them. By the way, Umphrey’s McGee headlines this year’s Founders Fest in Grand Rapids on June 17.
The Review: https://localspins.com/umphreys-mcgee-takes-meijer-gardens-fans-to-wondrous-new-places-with-intensity-face-ripping-riffs-and-the-groove/ 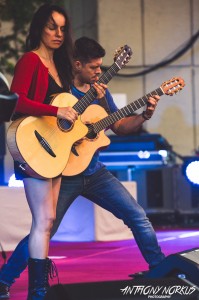 5. Rodrigo Y Gabriela, 2014 – My review of this incredible musical display called this duo’s approach an “anti-formula,” because it defied the normal conventions when it comes to contemporary music. Armed with just two acoustic guitars, the Mexican duo of Rodrigo Sanchez and Gabriela Quintero delivered a musical spectacle unlike anything Meijer Gardens audiences had ever seen before – absolutely masterful and electrifying.
The Review: https://localspins.com/rodrigo-y-gabrielas-brilliant-anti-formula-sparks-one-summers-impressive-concerts/

6. Gov’t Mule, 2012: Gov’t Mule will be back for the third time this summer, playing Meijer Gardens on Aug. 14 with Galactic. If you’ve never seen this band, I strongly suggest you get there for this one. In 2012, Warren Haynes and his crew not only revved up the amphitheater with their usual blues-rock-mixed-with-jazz-and-more, but they also played a rousing encore with legendary blues guitarist Donald Kinsey (a Grand Rapids-area resident at the time).
The Review: https://localspins.com/how-hot-was-meijer-gardens-govt-mule-concert-sizzling-photos-video/

7. Bonnie Raitt and Richard Thompson, 2016: I previously listed the legendary Raitt’s 2009 Meijer Gardens show with Taj Mahal, but because memories of this “exquisite, inspiring” performance are fresher in the mind, this concert has supplanted it. Suffice to say, Raitt will always make the Top 10. Oh, and it helps that the evening opened with the eye-popping guitar work of Richard Thompson.
The Review: https://localspins.com/bonnie-raitt-still-rules-world-meijer-gardens-exquisite-inspiring-display/ 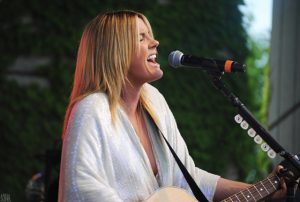 8. Grace Potter & the Nocturnals, 2013: All three of Potter’s appearances at Meijer Gardens (2012, 2013, 2016) have amounted to “inspiring, rock ‘n’ roll revival” shows that show off this singer and multi-instrumentalist’s passion, joy, intensity, verve and remarkable stage presence. But the sold-out 2013 show stands out for its enchanting atmosphere and gorgeous weather.
The Review: https://localspins.com/grace-potter-the-nocturnals-turn-meijer-gardens-into-rock-n-roll-revival-show/

9. TIE: Levon Helm, 2010; Gregg Allman, 2016: Sure, you could call this a nostalgia pick that pays homage to two legendary rock artists who we’ve lost. But make no mistake, the late Levon Helm, The Band’s legendary drummer, and his crew absolutely captivated a smaller-than-it-should-have-been crowd with joyful, horn-infused boogie-woogie blues and faves from The Band catalog. And Allman’s engaging “sweet, psychedelic sounds” and renditions of songs such as “Statesboro Blues” and “Whipping Post” made his 2016 appearance at Meijer Gardens a night to remember. Especially now. 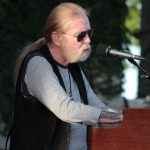 10. Buddy Guy, 2010: I said it before and I’ll say it again: With several appearances at Meijer Gardens over the years, I just can’t leave Buddy off this list. Of course, the fact that I got to meet and interview this legendary bluesman before his second Meijer Gardens show – which also featured J.J. Grey & Mofro – makes this one stand out, along with his crazy-good guitar work.
The Review: http://www.mlive.com/entertainment/grand-rapids/index.ssf/2010/06/guitar_innovator_buddy_guy_sho.html