Lyle Lovett and His Large Band delivered Large Musical Fun on Saturday as Meijer Gardens’ de facto “house band” returned to the amphitheater to enchant a West Michigan audience on a picture-perfect night. 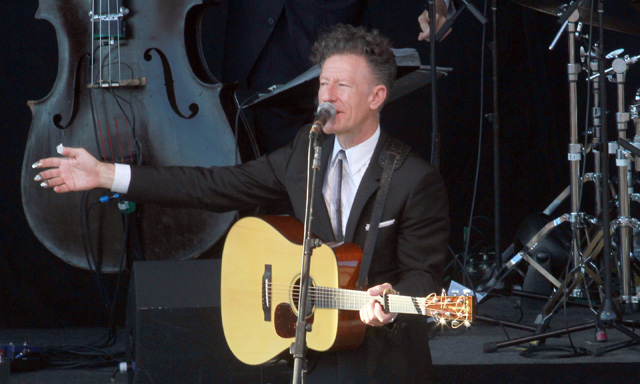 That’s Right, He’s From Texas: Lyle Lovett and His Large Band regaled a crowd of 1,900 on Saturday night. Photos/Jon Brouwer

When an artist gets a standing ovation before he even gets on stage, you know he’s in good company.

Such was the case for country/Western swing/jazz/Americana/everything singer-songwriter Lyle Lovett on Saturday night. 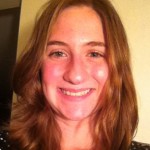 Returning for an eighth consecutive sold-out show over the past decade at Frederik Meijer Gardens & Sculpture Park, Lyle Lovett and His Large Band consistently delighted audience members throughout a 2-1/2-hour set on a hot August night.

“Thank you so much for bringing us back to Meijer Gardens,” Lovett said. “We’re thrilled to be back.”

The feeling was mutual: Following an instrumental opener by the band, Lovett strode on stage to plenty of loving cheers from the audience, immediately launching into “Black and Blue.” The notoriously camera-shy Lovett was at ease with the crowd, joking and interacting with fans throughout the night. 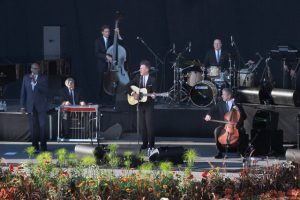 The set covered the gamut of Lovett’s musical personality. Familiar Lovett tunes “Choke My Chicken” and “Here I Am” kept the crowd laughing, while “Church” dazzled, chock full of instrumental solos showing off the horn and rhythm section, along with the hypnotic vocals of vocalist Arnold McCuller.

“That’s Right (You’re Not From Texas)” and “I’ve Been to Memphis” were made over from country and western songs into big band songs, featuring the necessary virtuosic, instrumental solos on alto saxophone, steel guitar and upright bass. A scat solo and solid four-part harmonies locked the whole tune together. Lovett easily transgressed genres, his husky, crooner’s voice smoothed over for jazz singing and roughed up for a country twang. 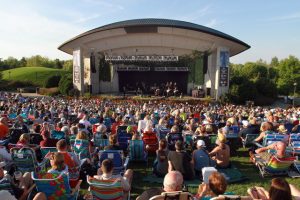 A full house at the Meijer Gardens amphitheater. (Photo/Jon Brouwer)

The encore first slowed things down with “North Dakota,” then brought the energy back up for songs such as “She’s Hot to Go.” It was the sort of eclectic display that showed the audience that the term “country singer” could mean anything from blues to R&B.

Surprisingly scorching, the sun presided over a spirited audience that was ready to see a dazzling storyteller and lyricist. This was a crowd of fans who appreciated each and every note played in every solo, rewarding soloists with whistles and applause. The crowd was also not afraid to get rowdy, shouting suggestions to Lovett throughout his set, and Lovett cheerfully commented back. 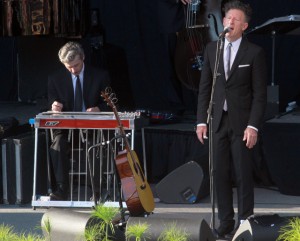 “I Will Rise Up,” a strong, resilient song, was a serious moment for the band, showing off Arnold McCuller’s soulful range and fiddle player Luke Bullock’s bluegrass-tinged vocals, as well as Bullock’s sizzling skill on his instrument.

“I’ve Been to Memphis” gave every band member time to shine. Twangy steel guitar and smoky saxophone solos showed off the band’s versatility.

“White Freightliner Blues,” a Townes Van Zandt cover, had the crowd up and clapping along to the band’s riotous treatment of the song.

“One of the great things about playing at Meijer Gardens is that we play early enough that we get to see you [audience members],” Lovett said. “We love checking out your headwear. And we’ve got some interesting caps in tonight. I see some with an ‘S’ on them and some with an ‘M.’” Of course a spirited vocal battle between Michigan State University and University of Michigan fans ensued. 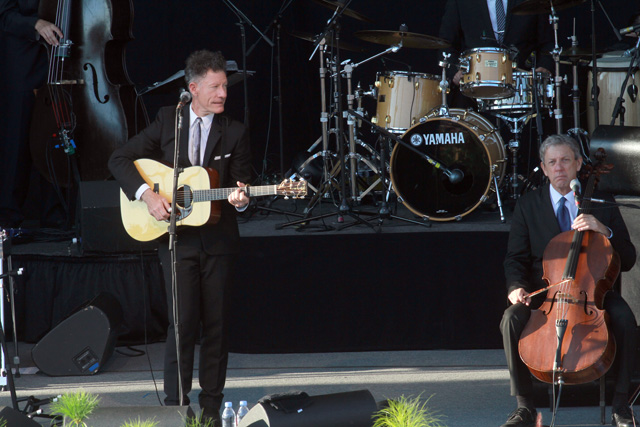