The Oct. 21 edition of Local Spins on WYCE boasted performances from country’s Diff & Dudley, plus new music by Nashon Holloway, Benjaman James and more. And this week’s episode of Local Spins Live on WJRW got creepy for the holidays. Check out both podcasts here. 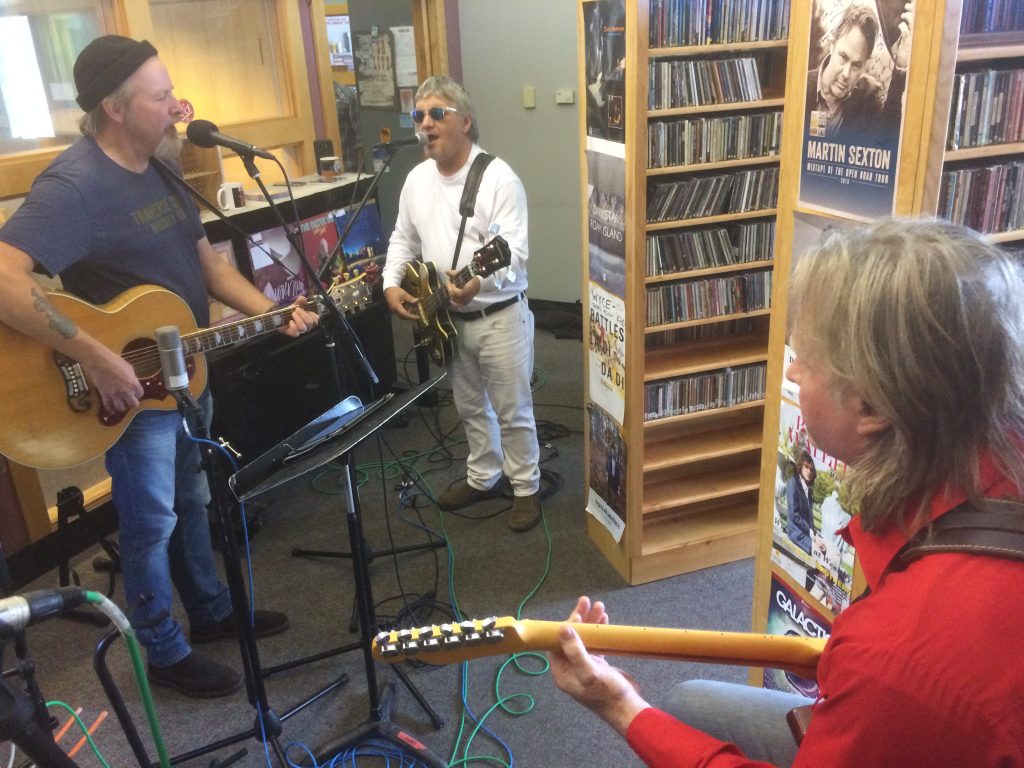 On the Air: From left, Jack Leaver, Mitch Wood and Dave Stanton from Diff & Dudley at WYCE. (Photo/Local Spins)

It took awhile to strike the match, but Jack Leaver and Mitch Wood’s mutual admiration for vintage country eventually ignited a songwriting inferno. 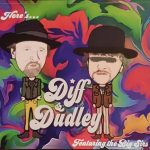 “Once we got started, we couldn’t stop,” recalls Wood, whose musical partnership with Leaver extends back to the alt-country-oriented Dushanes, which had its heyday in the late 1980s and early 1990s.

“We started writing songs and it was the country stuff that we wanted to do for a long time, a little bit more traditional,” adds Leaver, noting the duo’s Diff & Dudley debut album with an all-star cast of guest musicians features “lots of steel guitar, lots of honky-tonk piano. We wanted to do something a little more traditional.”

What emerged from sessions at Tommy Schichtel’s Goon Lagoon studio in Grand Rapids was “Here’s Diff & Dudley featuring The Big Sirs,” a twangy, 12-track affair steeped in the tradition of legendary artists ranging from Johnny Cash to Buck Owens. 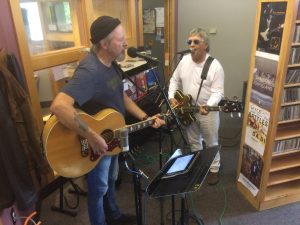 “We like to be reminiscent of the things we like, but we’re not trying to copy it,” says Wood.

Notes Leaver, who insists that the record covers many different styles of country: “We let the song dictate where it goes.”

The duo, joined by Stanton on guitar, appeared on the Oct. 21 edition of Local Spins on WYCE — on the final day of WYCE’s Fall Fund Drive — to chat about Diff & Dudley’s music and perform “I’ll Try” and “Fall In Love Again.” Listen to the podcast here.

The band is in the midst of setting up a performing schedule for fall and winter, with high hopes for recording more songs in the near future.

“We’re hoping that we make 10 more records,” says Leaver. “There’s so much stuff that we could go to. … We’re really jazzed to play as much as we can and get the music out there.”

Read more about Diff & Dudley in this Local Spins Artist Spotlight, and check out the duo’s website at diffanddudley.com.

The 110th episode Local Spins on WYCE also featured the radio premiere of tracks by Kalamazoo’s Nashon Holloway, Traverse City’s Benjaman James and Ann Arbor’s Friends With the Weather, along with songs by The Concussions, Fauxgrass, Mystic Dub and Coffin Problem.

For this week’s episode of Local Spins Live on News Talk 1340 AM (WJRW), host John Sinkevics aired samples of unusual Halloween-hued rock tracks to tingle folks’ spines for the holidays — songs that appeared on guest playlists recently supplied by West Michigan musicians at Local Spins. Check out the podcast from the radio show here, with the full playlists at Local Spins.