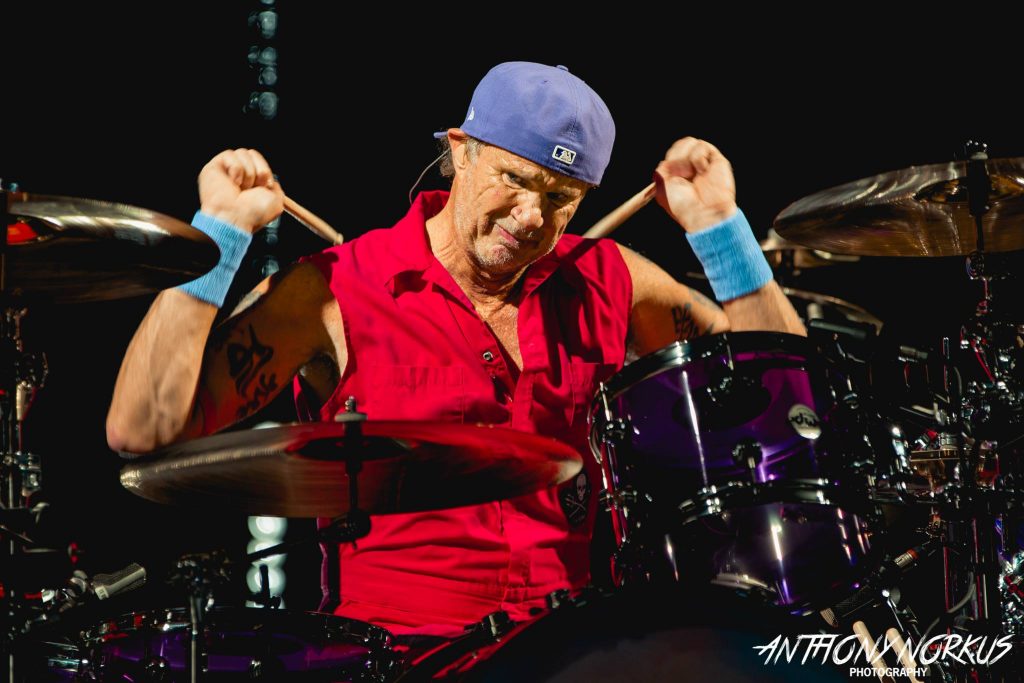 Making the Rounds: Chad Smith with the Red Hot Chili Peppers at Van Andel Arena after joining other bands the night before. (Photo/Anthony Norkus)

A few lucky Grand Rapids musicians had the special guest of a lifetime sitting in with them on a Saturday night in 2017.

Chad Smith, drummer for the Red Hot Chili Peppers who played a sold-out concert at Van Andel Arena on June 25, 2017, made the rounds the night before in downtown Grand Rapids, surprising bands by playing Mojo’s Dueling Piano Bar & Restaurant, then performing next door with Grand Rapids’ BareNaked 90’s at Flanagan’s Irish Pub, and sitting in with Sebastian Bach during a show at 20 Monroe Live. 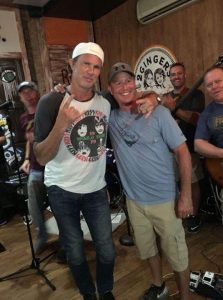 At Flanagan’s, Smith — who grew up in Bloomfield Hills and is considered one of rock’s pre-eminent drummers — jumped behind a drum kit to play the BareNaked 90’s rendition of the Red Hot Chili Peppers’ “Under the Bridge” to the delight of band members and patrons who cheered and sang along.

“Totally unexpected, and a ton of fun,” band bassist Charlie Hoats told Local Spins. “Someone told us he was in the room, so we pulled out ‘Under The Bridge,’ which we had only rehearsed once previously and had not played before in public. He immediately walked up to the bandstand, and our drummer (Mike Snider) made way for him. What a blast!”

“We were just as awe-stricken as the rest of the patrons to see a person of that caliber at a local pub,” added Yott.

“He plays louder and harder than any drummer I have ever played with. To play with someone at that level, and to be playing their song, the entire thing was pretty surreal. … He was a very cool guy lending his talent to a local band working the West Michigan circuit.”

The gregarious Smith, wearing a classic KISS world tour T-shirt, also strolled a couple blocks down the street to 20 Monroe Live (now known as GLC Live at 20 Monroe) where ’90s rocker Sebastian Bach and his band were making a Grand Rapids tour stop. 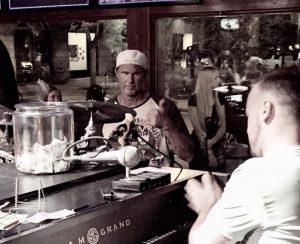 Bach paid homage to some fallen musicians, most notably Soundgarden’s Chris Cornell (who passed away after a show in Detroit) and Greg Allman, culminating in the band playing another Skid Row classic, “Monkey Business”, wherein they segued into the Allman Brothers’ “Whipping Post,” which saw Smith come out to a raucous roar as he jammed along with the band to finish the song. (See video below.)

A few lucky fans were able to get some photos with the drummer before he headed out into the crisp summer night.

Chad Smith sitting in with Sebastian Bach at 20 Monroe Live in Grand Rapids (6/24/17) from John Sinkevics on Vimeo.