The acclaimed Michigan-bred guitarist’s remarkable rise to stardom and acclaim topped all other news items as the most-read story of the year. And he’s since been nominated for two more Grammy Awards. Unquestionably, Billy Strings is Local Spins’ “Newsmaker of the Year” for 2021.

While West Michigan fans of the Ionia County-bred bluegrass guitarist were crushed with disappointment after William Apostol, aka Billy Strings, was forced to cancel this week’s trio of sold-out concerts at GLC Live at 20 Monroe due to COVID concerns, it didn’t mar the musician’s remarkable year of accomplishments.

After scoring the No. 1 bluegrass album of the year in 2020, the highly acclaimed guitarist and singer earned something even better: His first Grammy Award.

As part of the Grammy Awards’ “premiere ceremony,” the Recording Academy in mid-March announced that Billy Strings’ “Home” had won the Grammy for best bluegrass album. And that news at Local Spins made it the most-read story by far for 2021.

With the awards ceremony streaming online – ahead of CBS’s nationally televised show, reserved for the top pop recordings – Apostol thanked his mom and dad in Ionia County, his band, his team, his sponsors, the academy and co-producer Glenn Brown of East Lansing. 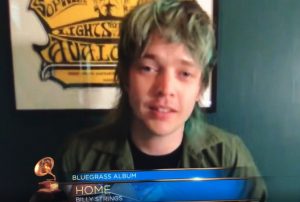 “And last, but most of all, all the fans who come out to the shows and see us play,” he said. (Scroll down for a video of his reaction to the award.)

But that was just the beginning of an action-packed year of milestones. In the fall, he not only won “Entertainer of the Year” and “Guitar Player of the Year” honors from the International Bluegrass Music Association, but released another studio album, “Renewal,” that also shot straight to No. 1 on the Billboard Bluegrass Albums Chart.

He followed that release with yet another sold-out national tour with his talented band, then landed two more Grammy Award nominations — for best bluegrass album for “Renewal” and best American roots performance for the song, “Love and Regret.”

And in the midst of that, he still found time to personally donate 200 guitars to students at Muir’s Twin Rivers Elementary School, which he attended as a young, budding musician.

Indeed, four other Local Spins stories about Billy Strings ranked in the Top 40 for 2021, including his fan-pleasing performances at August’s Hoxeyville Music Festival in Wellston, Mich. The wunderkind guitarist certainly has enjoyed a meteoric rise since first making a splash on the scene with Traverse City mandolinist Don Julin several years ago.

He followed up his first No. 1 album, “Home,” with a sold-out national tour that closed out with a jam-packed, homecoming show on New Year’s Eve at The Intersection in Grand Rapids.

Later, on Instagram, he wrote that he was “beyond grateful for the amazing humans behind this record. … I wish I could hug every single person listed on these album credits. We’re gonna celebrate the only way we know how, by hitting the road for some live shows.”

• Billy Strings wins Entertainer of the Year as latest album hits No. 1