Local Spins celebrates its fifth birthday in May with an album featuring 12 regional acts, special shows and giveaways, a street party and a Rockford Brewing IPA brewed especially for Local Spins. Plus, see how you can join the Local Spins family. 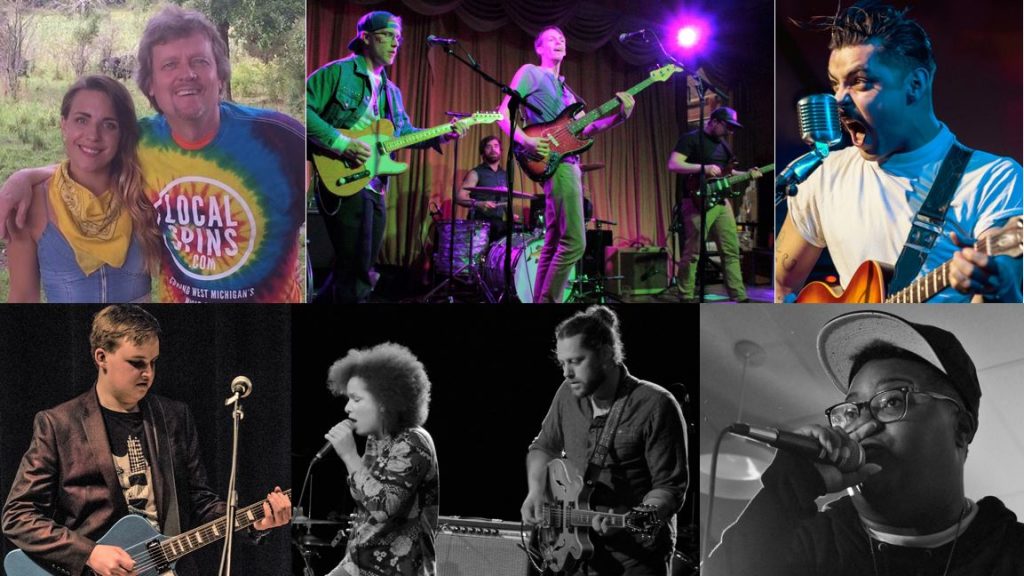 I’ve often told people that when I started the Local Spins website five years ago, it was like jumping off a cliff into the unknown.

After a career in newspaper journalism that ended rather abruptly, launching an online publication devoted to West Michigan’s music scene seemed like a brazenly risky, if exciting, proposition. 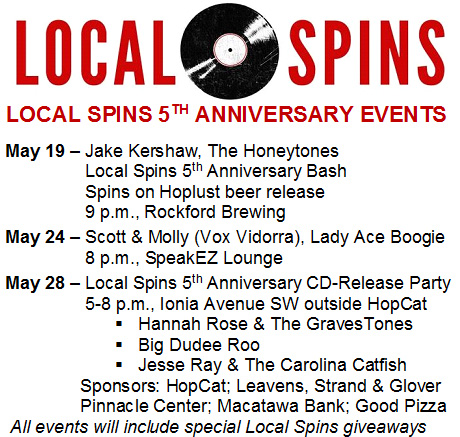 May: A Time to Celebrate

I recognized the vast potential of the region’s uber-talented musicians but had no idea whether the venture would be financially viable, whether readers and businesses would embrace the idea, whether I could persevere and endure the grueling number of hours it takes each week to keep Local Spins humming.

I’m proud to say that the deep, dark waters I dove into have proven to be warm, inviting, supportive and oh-so-satisfying.

I never dreamed Local Spins would have such loyal advertisers and intensely devoted followers of its online magazine, plus  our two radio shows showcasing Michigan music, a weekly concert series at SpeakEZ Lounge, video/podcast sessions featuring emerging bands at River City Studios and syndicated stories that appear in print from Holland to Traverse City.

With help from an amazing group of contributing writers and photographers, not only has Local Spins grown by leaps and bounds every year – from its loyal readership to the geographical reach of the cities, venues and bands that it covers – but West Michigan’s incredible music scene has grown right along with it. Our region, I think, has the potential to become the next Seattle or Austin. And music makes West Michigan a great place to live (along with that little pond to the west).

As thrilling as this time has been for me personally, there’s much more to explore and much more work ahead to nurture the musical landscape in Grand Rapids, Kalamazoo, northern Michigan and along the lakeshore.

With the assistance of readers, sponsors and advertisers, Local Spins aims to be part of this adventure and expand in order to to keep music lovers informed, to showcase the region’s burgeoning pool of talent and to foster this creative community. See how you can help below.

Oh, and we love a good party.

So we’re celebrating our fifth anniversary in May with a series of free special events to mark Local Spins’ birthday, reward our readers and followers, and toast some of the West Michigan bands who’ve made this such a special scene. 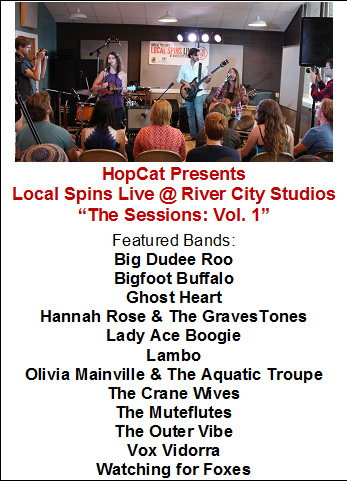 The Local Spins album will be released in late May

Several of these acts are featured in fifth anniversary shows throughout May, with the official CD-release show taking place May 28 on Ionia Avenue SW outside HopCat, after the HopCat Extra Time 5K Race that starts at 4 p.m. The show will feature performances by Hannah Rose & The GravesTones and Big Dudee Roo (who are featured on the Local Spins CD) and Jesse Ray & The Carolina Catfish (who will be showcased in an upcoming River City Studios sessions). Sign up for the HopCat Extra Time 5K online here.

In addition, Local Spins will host a Fifth Anniversary Party on May 19 at Rockford Brewing Co. in Rockford, with release of this year’s Local Spins beer, Spins on Hoplust. Performing will be 16-year-old blues-rock sensation Nick Kershaw from Marshall, with The Honeytones trio opening the show.

That will be followed on May 24 at SpeakEZ Lounge with performances by two Grand Rapids acts featured on the Local Spins CD: Scott and Molly of Vox Vidorra, with special guest Lady Ace Boogie.

Each one of these free-admission May events will feature special giveaways of Local Spins merchandise, gift cards, concert tickets and more. It is a birthday party, after all.

More people are reading Local Spins than ever before, but in order to keep things spinning and enhance coverage of West Michigan’s music scene with the stories, photos, videos, reviews, podcasts and other features for you, we need your help. Many websites have put up paywalls to help finance their work. We haven’t. But as part of a Local Spins community of folks invested in showcasing Michigan-bred talent, we’re our readers to consider supporting Local Spins and what we do. Those providing gifts at any level, whether it’s $5 or $50, will have their names listed in the Local Spins Hall of Fame. For $50 or more, you will receive a copy of the first-ever “Local Spins Live at River City Studios” CD and a gift card to a local brewery. (The CD will be available after May 25.) Thank you for being part of the Local Spins family and helping us cover West Michigan’s burgeoning music scene.

Click here to donate to Local Spins (and to receive your CD and gift card)!