Building on the success of its full-length debut album, the band went acoustic for this week’s show, which also featured the debut of tracks by Chain of Lakes, Olin Clark, Antighost and more. (Video, podcast) 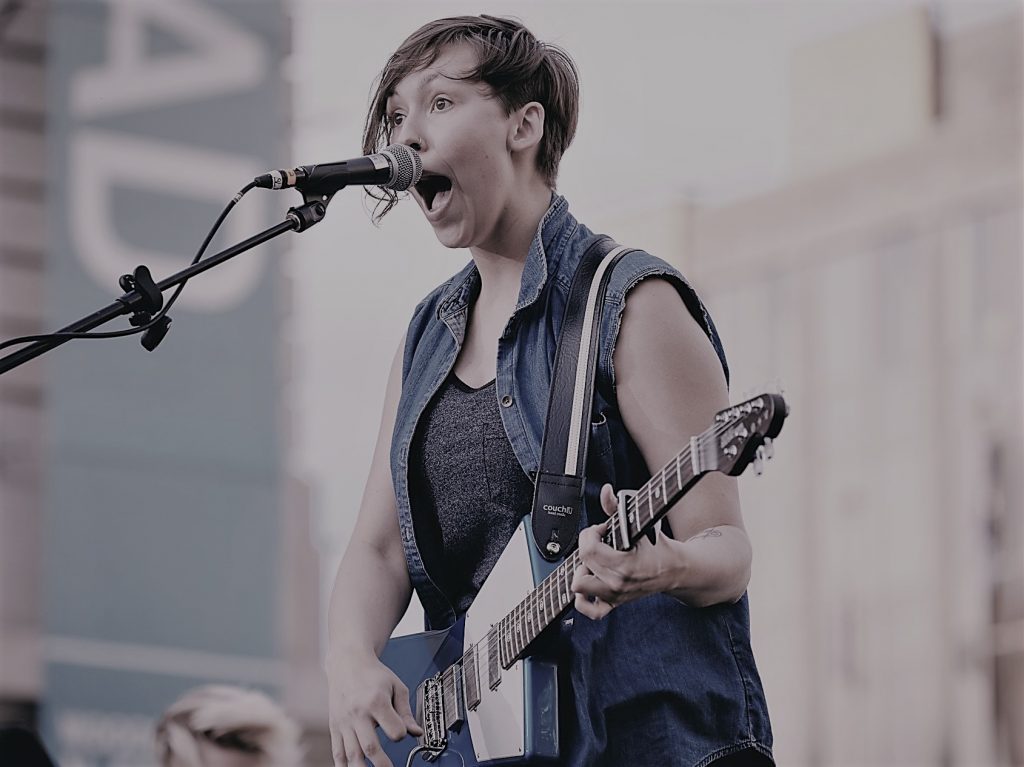 Growing as a Pop Band: Karli Morehouse and Lipstick Jodi are cultivating a devoted West Michigan fan base. (Photo/Anthony Norkus)

Singer-guitarist Karli Morehouse appreciates the deep connection some fans of the Grand Rapids pop/rock band Lipstick Jodi have made with her music.

After all, she recalls being inspired by her own favorite artists as a budding 8-year-old musician back in the day, inspired by the likes of Fleetwood Mac, Prince and others. 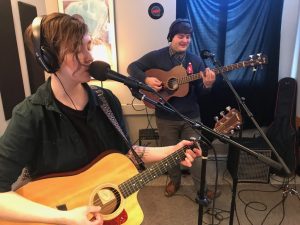 On the Air: Karli Morehouse and Devon Cline in Studio X at WYCE. (Photo/Local Spins)

“People have told me stories. They come up and talk to me,” Morehouse says. “It’s super-cool they can attach hemselves to something I’ve created. … They end up taking it as their own and becoming attached to it with their own personal experience. I’ve always wanted to be an artist that can help out other people in that way. That’s how I’ve always used music: as an outlet.”

That outlet has proven increasingly successful since Morehouse and drummer Luke Rockhold started the band three years ago. The group – which also features Jamie Baarman on keyboards and Devon Cline on bass – made a splash with its second recording and full-length debut album, 2017’s “Lipstick Jodi,” even winning best alternative album of the year at February’s WYCE Jammie Awards.

With new management on board, they continue to rebrand themselves and evolve as a group, with Morehouse conceding they’re heading in a direction that’s ever more pop oriented.

“We’re constantly growing. I value that in every aspect of my life,” she says. “I feel like we’re going to become more of a production.”

That doesn’t mean, however, that Lipstick Jodi can’t show off its catchy music in pared-back, acoustic fashion. Morehouse and Cline proved that during this week’s Local Spin on WYCE, when the band performed as a duo in Studio X, performing “Katrina” and “Exist” from Lipstick Jodi’s 2017 CD. Check out a video of their performance of “Exist” here, with the full radio show podcast below.

Finally assembling and completing a full-length album – recorded by Austin Ruhstorfer at River City Studios in Grand Rapids – was “a really emotional” and satisfying experience for Morehouse. 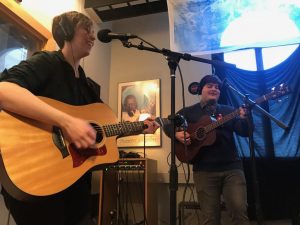 Clicking as a Band: Cline, at right, is a recent addition to Lipstick Jodi. (Photo/Local Spins)

“These are songs I’ve been gathering in the last four or five years and it was really cool to get them all on one album. It was like having a complete thought,” she offers. “It came out exactly like, or even more than I could have even imagined it being.”

On Friday night, the band played for the third straight year at the WO-Stock Music Festival at West Ottawa High School (an event featuring 33 acts on two stages over two nights). On Saturday night (March 24), Lipstick Jodi will play the LowellArts House Concerts series in downtown Lowell at 7 p.m. Get details about that show online here; tickets are $7 at the door.

Lipstick Jodi also will travel to Kalamazoo to play The Union Cabaret & Grille at 9 p.m. March 31 and Bell’s Eccentric Café (with Reggie & The Full Effect) at 8 p.m. April 5.