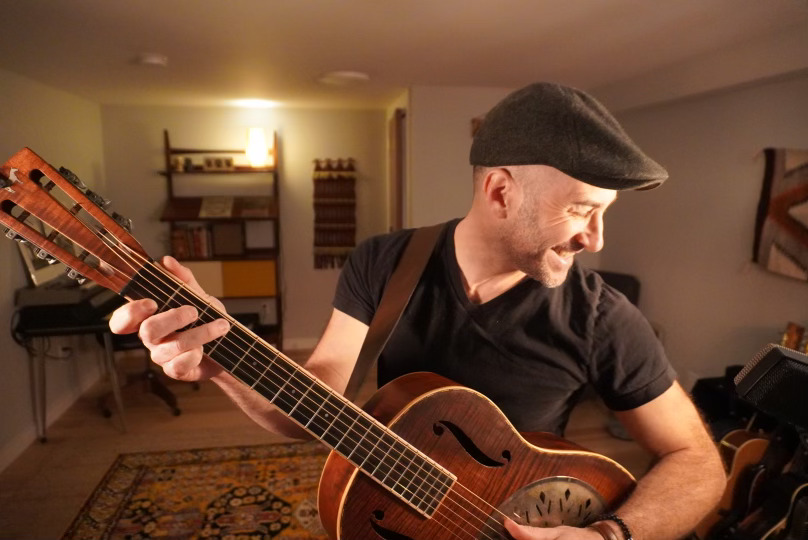 Getting Creative About the New Reality: Joshua Davis in his home studio. (Courtesy Photo)

SCROLL DOWN FOR LOCAL SPINS ON WYCE RADIO SHOW PODCAST

Growing up, Joshua Davis resented the times when his father would make him get out his guitar to entertain guests at parties and family gatherings.

But he credits those early performances as a shy, fledgling musician for helping him overcome his stage fright.

“I probably wouldn’t be doing what I’m doing now if it weren’t for him pushing me like that,” the Traverse City singer-songwriter recalled. “He was my rock.”

So when his dad passed away a few years ago, the grief and emotional trauma not surprisingly derailed Davis musically.

“I kind of froze for awhile,” conceded Davis, noting he didn’t write almost any new music for three years. “It was very difficult emotionally.”

But the words and the music have returned, with Davis now crafting new material from “little skeletons of things” he’s penned over time. “I’ve taken a long break and am excited to get back to it,” he said. 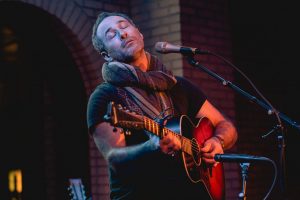 He debuted a new song inspired by his father’s death, “Paper Boats,” for this week’s edition of Local Spins on WYCE – a poignant tune he recorded in the studio at Interlochen Center for the Arts where he teaches songwriting. Scroll down to listen to the track as part of this week’s radio show podcast.

The indie-folk artist who made a splash on NBC’s “The Voice” back in 2015 hopes to record and release a new EP at some point this year – depending on the nation’s recovery from the COVID pandemic.

While that pandemic upended all but three live concerts for Davis in 2020, the singer responded by hosting weekly live-stream performances from his home studio to stay connected with his fans.

“What I didn’t expect is that I would like it as much as I do. It’s been a real joy for me,” he said of the intimate and informal Thursday shows that regularly attract a couple hundred listeners via Facebook online.

“It’s been something that is not a concert. It’s like a hangout.”

As an artist who’s always enjoyed interacting with fans from the stage, David said the live-streams’ “organic and off-the-cuff” vibe has been rejuvenating and enjoyable. (Replay a video of this past week’s live-stream here.)

Of course, the past year hasn’t just revolved around regular live-streams and “trying to maintain sanity in any way” possible. Davis’ wife gave birth to their fourth child, Luka, in December, so much of 2020 has been about spending time with family – along with cooking, gardening and taking up running — minus the usual weekends on the road as a touring musician.

He also teaches private music lessons and serves as a songwriting instructor at Interlochen, something he calls “a real lifesaver” during a time when musicians are struggling without regular paying gigs.

“I think there’s very little that can teach you more about a subject than teaching it,” he insisted. “It’s made me have to put words to things and explain things that are amorphous and mysterious. It’s been inspiring.” 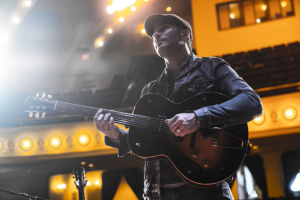 But make no mistake, Davis aches to get back to performing with other musicians and hopes that might be possible at some point later this year.

“I really miss playing with other people,” said Davis, who in addition to fronting his own band is a member of Michigan’s Steppin’ In It (which mounted a sold-out reunion tour in 2018). “Man, I just want to play with a band again. … It’s unbelievable how badly I miss it.”

But he’s also convinced the pandemic is forcing artists to find new ways to reach audiences with their music — taking things in “positive directions from being challenged” in such a dramatic way.

“We all have to be creative about this,” he said. “Everybody’s trying to figure it all out.”