As an “avid outdoor guy,” Shawn Butzin’s move to Traverse City from the Detroit area made perfect sense.

“Traverse City really appealed to me – the scenery and outdoor activities,” he reasoned. “I’ve been here going on three years and haven’t looked back since.”

The singer-songwriter and multi-instrumentalist has even written about northern Michigan’s breathtaking beauty, reflected in songs such as “Indigo Sky,” which was inspired by a striking sunset. He released the track as a single last year. 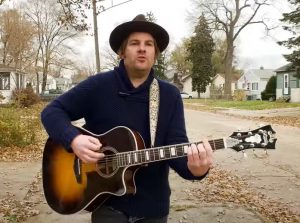 Yacht Rock: Butzin has been influenced by CSNY, Bread and Mac Davis.

Butzin, who’s performed his “yacht rock” and indie-folk tunes regularly at various breweries and wineries, even immerses himself in grooming trails and assisting with social media marketing as a weekend volunteer for the U.S. Department of the Interior at Sleeping Bear Dunes.

It’s part of his philosophy to soak up nature and let new songs incubate freely, with an eye toward a possible fall release of a follow-up to his 2018 EP, “Adventures,” and 2017 full-length debut, “Northern Trails.”

“I am sitting on a few songs that have been recorded, just the instrumentations, but I’m not putting any pressure on myself to finish these within a certain time frame,” insisted Butzin, an ardent mountain biker and photographer.

“I believe when the right time comes, it’ll happen naturally. For me, being in nature tends to help get the creative flow back.”

For this week’s edition of Local Spins on WYCE, Butzin spotlighted “Indigo Sky” and his most recent single, “Smell the Roses,” while discussing his career as a performer and songwriter. Watch the video for “Indigo Sky” here and scroll down to listen to the full radio show podcast.

Butzin readily admits he’s “a late-bloomer, slow to the game” when it comes to music – learning to play drums and guitar in his late 20s and early 30s – after growing up in Chesaning, Mich., “hooked” on the records of his father and older siblings.

After spending several years in Colorado playing drums for the garage-surf band Thee Dang Dangs, Butzin returned to Michigan and began working on his solo career in earnest. 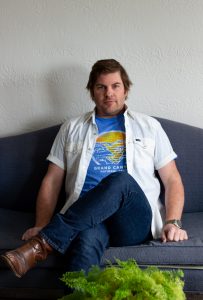 Butzin also finds lots of inspiration in watching bands in concert and solo artists performing live in breweries and other venues. Consequently, the year-long shutdown of live music due to the pandemic has had “a huge impact on the psyche and everything” by limiting his contact with “other musician pals throughout the state.”

While he’s eager to return to northern Michigan stages, Butzin said he’s cutting back on his travels and touring across the state for now.

In the meantime, he’s concentrating on expanding and enhancing his sound.

“As far as the direction of my music, I’d like to focus on having more of electric guitar sound,” he said. “My past few songs have been focused on the acoustic guitar and I’m looking forward to more of an electric style.”

In addition to interviewing Butzin, this week’s edition of Local Spins on WYCE – which focuses on Michigan music at 11 a.m. Fridays on WYCE (88.1 FM) and online at wyce.org – featured the on-air debut of tracks by Medicinal Groove, Snacks & Five, Brian Vander Ark & Channing Lee, KJ & The Good Time Family Band, Laine Rex, Amy Love, DL Rossi and Shady Groves, as well as music from The Accidentals and Mike Galbraith (the musician’s pick by Butzin). Listen to the complete radio show here.