As part of a U.S. tour, the Spain-based Cadillac native kicks off Local Spins Week in Grand Rapids on Monday. The Local Spins interview and a ticket giveaway. EDITOR’S NOTE: Luke Winslow-King & Roberto Luti kick off Local Spins’ 10th anniversary week with a concert at Grand Rapids’ Listening Room on Monday. Email john@localspins.com with “LUKE” in the message field and your name will be placed in a drawing for two free tickets. And scroll down to watch Winslow-King’s brand new music video.

Internationally celebrated singer and guitarist Luke Winslow-King readily concedes that moving to Spain has changed his life “in many ways” – from absorbing local music and culture to studying the language and Spanish guitar.

But the Cadillac native relishes his Michigan upbringing and the time he’s spent this spring “reconnecting with friends and family” in his home state as he prepares for a major U.S. tour in support of his brand new studio album, “If These Walls Could Talk.”

“I’ve been celebrating ‘trout camp’ – my favorite red-letter day on the calendar. Great to be back,” says Winslow-King, who kicks off Local Spins’ 10th anniversary celebration with an intimate concert at Grand Rapids’ Listening Room, performing as a duo with guitarist Roberto Luti on Monday (May 16). Ralston Bowles and Justin Wierenga open the show at 7:30 p.m.; tickets, $20, available online here. 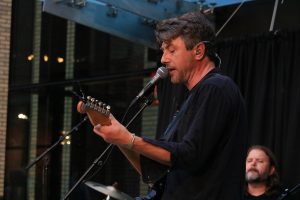 Winslow-King is particularly keen for West Michigan fans to hear his longtime musical associate and songwriter Luti perform on stage, especially since the guitarist unleashed “angular, exotic and profoundly expressive slide-guitar work” on the new album – an album produced by another Michigan native and pal Dominic John Davis, bassist for Jack White.

“Seeing Roberto perform live in New Orleans 20 years ago changed my vision of music, changed my understanding of the slide guitar,” he says.

“I don’t honestly think I would make the same music without his influence. I hope people don’t miss the rare opportunity to catch him live and in person in Grand Rapids. This will be his first Grand Rapids performance.”

The follow-up to 2016’s “I’m Glad Trouble Don’t Last Always,” Winslow-King’s seventh full-length studio album was recorded at Memphis Magnetic Recording and features a series of musical vignettes that serve as “windows into rooms that celebrate the life of the living and of the departed.”

MUSICAL WATERS THAT FLOW ‘FROM OUR NATURAL HOME IN MICHIGAN’

“Thematically, the album explores the personification of architecture. It suggests that rooms become more than brick, mortar, plaster, meta, and wood – that they become more than the sum of their parts when stories transpire between their walls,” Winslow-King suggests.

“Sonically, the album parades our more than decade-long history as a band in New Orleans north to the soulful rock ’n’ roll shores of Memphis, while remembering that many of these waters have flowed from our natural home in Michigan.” “If These Walls Could Talk”

Inspired by love and loss – and “finding peace in learning how better to deal with both” – the 10-track album ranges from the upbeat, harmony-laden romp of “Slow Sunday June” to the pensive, whispery balladry of “Leaves Turn Brown.”

Winslow-King – who now has dual residency and is engaged to be married this summer – says the support of fans sustained him during the pandemic. The experience sparked “more appreciation for my ability to live and work as an artist” inspired by “the flavors and essence of the rich culture” in Spain.

“I feel a renewed sense of responsibility on stage, like it’s an opportunity to gather, to reflect on everything we’ve been through, accomplished and lost together.”

He and Luti will showcase that fresh stage approach as part of a 40-date tour of the eastern United States that kicks off this week and runs through late July.

In addition to Monday’s Listening Room show, Winslow-King will play Michigan shows at Coyote Crossing in Wellston on June 4, Holland’s Park Theatre on June 8, 20 Front Street in Lake Orion on June 9, The Ark in Ann Arbor on June 10, Blissfest outside Harbor Springs July 9-10, Jacob’s Farm in Traverse City on July 15, Northern Naturals in Chief on July 16 and the Lowell Showboat Sizzlin’ Summer Concerts Series in Lowell on July 21.

VIDEOS: Luke Winslow-King, “If These Walls Could Talk”