Filmed by Grand Rapids’ Gorilla Pictures at Mulligan’s Pub and a Southwest Side warehouse, the Vans Warped Tour debuts the rock duo’s video today, just ahead of June 25 release of a new album. Watch it here.

Warehouse Wackiness: The Bangups, in animal heads, at the Southwest Side video shoot. (Photo/Lance Mokma)

Leave it to The Bangups to come up with an outlandishly original music video that’s liable to take the country by storm.

Officially released this afternoon nationally by the Vans Warped Tour, the video for the Grand Rapids rock duo’s “Ego Wrecking Ball,” the lead single from the band’s upcoming “Hellcat!” album, boasts an artfully crafted story of paranoia and revenge, with guitarist Joey Dornbos and drummer Brent French wearing giant bear and cat heads, beating each other with saws, hammers and baseball bats, and generally causing mayhem. 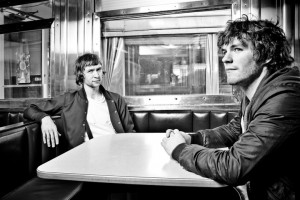 Directed by Stephen Pell and Seth Johnson of Grand Rapids’ Gorilla Pictures, and produced by Virginia Anzengruber, the video was filmed earlier this year at Mulligan’s Pub in Eastown, with a bevy of simulated spoof-styled torture scenes taking place in shadowy, vacant warehouse space above Lost & Found Antiques on Century Avenue SW.

“There were 50 takes of Joey just screaming at me,” French said. “That was the most exhausting part, just getting yelled at for over an hour.”

The “wild” video is a tale of two paranoid pals who fantasize about their suspicions of deception, leading to abductions and revenge. The duo credits Gorilla and the directors for “flawlessly” creating the unique music video, which you can check out below.

Oh, and the song itself just happens to be a scrappy, fist-pumping, rock ’n’ roll gem, with a dash of punk attitude and plenty of melodic flair. 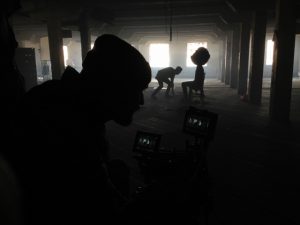 Dark But Whimsical: In the shadows on the set. (Photo/Lance Mokma)

Release of the video – also launched on YouTube, with the band working to get rotation at MTV and Fuse – comes just a few weeks before the official June 25 release of “Hellcat!” The band’s 10-track sophomore album was recorded with Peter Fox at Grand Rapids’ Stone House Recording.

It’s the duo’s first studio album since 2009, so there’s plenty of pent-up excitement about its potential, especially with The Bangups set to once again play the national Vans Warped Tour starting July 3 in Indianapolis.

“We really want to see good things happen with this album and we really believe in it,” Dornbos said.

Added French: “We really took our time and there’s been some anticipation around the single and there are people we met on (last year’s) Warped Tour who want to hear new music. I think it stands up for itself with the amount of time we put into it.”

And good news for West Michigan fans: The Bangups will host a Grand Rapids CD-release show on July 27 at The Pyramid Scheme, with Holy White Hounds, The Brave Youth and more. Ticket details here.