A movie filmed in Michigan will be part of the pop-laced indie-rock band’s April tour behind its sophomore recording. Grand Rapids gets a sneak preview of the music Tuesday night at The Pyramid Scheme. 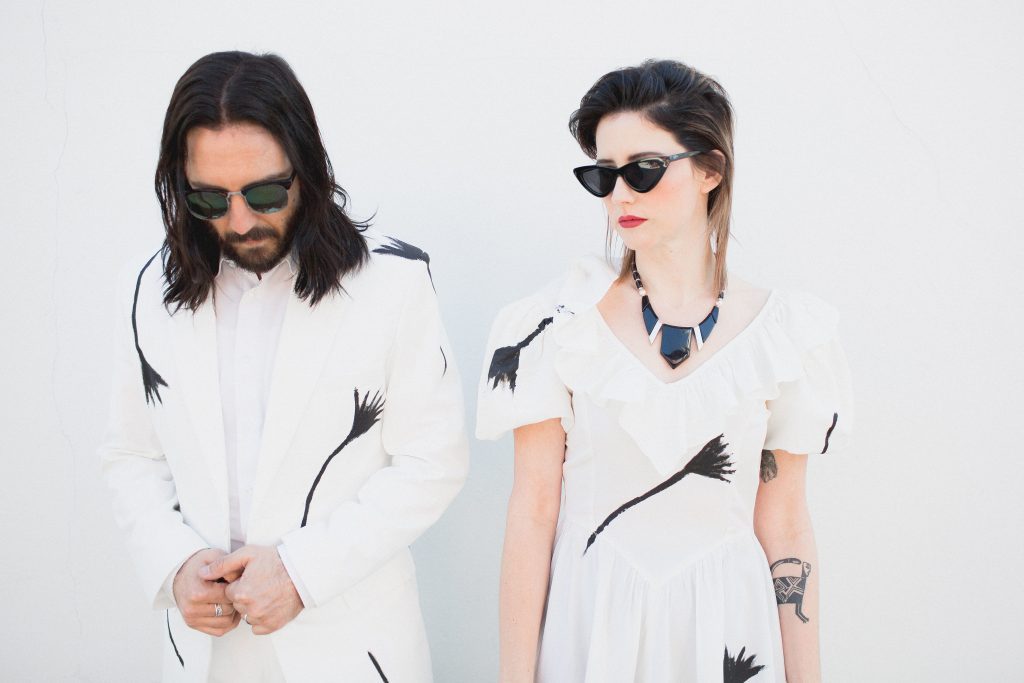 Reflecting Their On-Stage Chemistry: In the Valley Below’s feature film will be shown during their album-release tour in April. (Photo/Jaimie Skirba)

Scroll down to watch the movie trailer and official video for In the Valley Below’s new single, “Rise.” The band plays The Pyramid Scheme in Grand Rapids at 8 p.m. Tuesday (March 19), with Lipstick Jodi and Caleb Byers. Tickets are $10; details at pyramidschemebar.com.

Considering their alluring approach to performing, it’s not surprising that Angela Gail Mattson and Jeffrey Jacob Mendel of Grand Rapids’ In the Valley Below would choose to augment their second full-length studio album with a fetching and sultry feature film inspired by “The Pink Chateau’s” songs.

So when the pop-propelled indie-rock band heads out on a U.S. tour to promote the new album in April, fans will experience a live performance of the recording while watching this “modern silent film” directed by Mattson and filmed at a Battle Creek mansion (aka, “The Pink Chateau”). 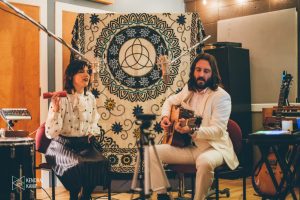 ‘An Art Project At Its Core’: Angela Gail Mattson and Jeffrey Jacob Mendel of In the Valley Below at Grand Rapids’ River City Studios. (Photo/Kendra Kamp)

Most of the 11-track album – which officially gets released by San Francisco’s Bright Antenna Records on April 26 – was created in the couple’s home studio in Grand Rapids, with drums and Debra Perry’s Majestic Praise gospel choir recorded at Stone House Recording.

The film to accompany the album was financed by Bright Antenna, with the goal of providing “current fans and new fans with a unique way to experience the record.” Record label head Tiffanie DeBartolo suggested the idea of a film for mature audiences that capitalized on the couple’s chemistry on stage.

“I took that idea and ran with it,” Mattson said. “It became more vintage-inspired erotica, as I like to call it. The album was finished already so I wrote a story to weave the songs together. Previously I had directed and shot five of our videos on my own and co-directed a couple more with cinematographer Chris Johnson. He was also the director of photography on the film.”

Mattson called on friend Marcos Efron to co-direct the project because “he had the organizational skills and experience with producing and directing feature films. I learned a lot from him. It’s a much bigger undertaking than a single video.”

‘A MAGICAL PLACE’ IN MICHIGAN FOR THE FILM’S SETTING

The band filmed much of the movie at Greencrest Manor, a bed and breakfast in Battle Creek.

“It’s truly a magical place, hidden in a sea of farms,” Mattson said, noting she and Efron “took on a lot of the pre-production jobs ourselves to keep the costs down. I didn’t sleep for three months. We also brought on local producer and filmmaker Lisa Enos to help us get this done in and around Grand Rapids.”

The official tour behind the new album, billed as “an immersive audio/visual experience,” kicks off April 9 in Brooklyn and ends on April 23 in San Francisco. 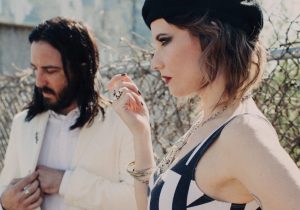 Making Songs They Want To Listen To: In the Valley Below. (Photo/Jaimie Skirba)

“There is no singing in the film, just a narrative while music plays,” Mattson. “For these shows, we will provide the audience with headphones and broadcast our live performance of the album to them while they watch the film in the theater. We will be in front or to the side of the screen with minimal lighting.”

Before that, however, In the Valley Below plays two Michigan shows this week sans the film element – Tuesday night (March 19) at The Pyramid Scheme in Grand Rapids and March 22 at The Acorn Theater in Three Oaks.

“For our theater tour in April, we partnered with Alamo Drafthouse Cinemas around the country, and unfortunately, they don’t have a location here in West Michigan,” Mendel said. “For our Pyramid Scheme show, Grand Rapids can expect new songs, and our usual intense, dark and romantic stage show. And of course lots of guitar solos.”

Because the band’s regular drummer, Joshua Clair, is based in Los Angeles, the band will perform here with touring drummer Scott Gentry of Grand Rapids, which “makes it possible to play more local shows, which we hope to keep doing.”

The all-ages Pyramid Scheme show begins at 8 p.m. Tuesday with sets by Lipstick Jodi and Caleb Byers. Admission is $10 with tickets available online at pyramidschemebar.com or at the door. Doors open at 7 p.m.

MORE TOURING AHEAD AND A LOVE FOR MICHIGAN SUMMERS

While music from the band’s forthcoming album has “a little more soul and gospel influence,” Mendel stressed that they “just kind of make songs we would want to listen to.” And those songs are mesmerizingly atmospheric, sensual and bewitching. 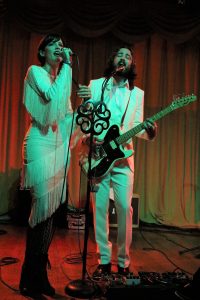 Mendel and Mattson, who moved to Grand Rapids from Los Angeles a couple of years ago, have embraced their Michigan home base, raising a young son here and making contacts in the region’s music scene. Peter Fox of Grand Rapids’ Stone House Recording now tours with the band as the front-of-house audio engineer.

“He had never toured with a band before, but we have so much fun together and knew he was talented enough for the job,” Mendel said. “I’m not sure if he’s stopped touring since then.”

“We like to stay in Michigan to enjoy the summer. Being a parent does make touring a lot harder,” she said.

“On tour now we have to keep up with school work. We also have to bring a nanny on the road to watch him while we’re on stage. It’s also nice to share all these experiences and teach our son about the world as we travel around. He’s been to 16 countries already, but he doesn’t remember most of it.”

VIDEO: In the Valley Below, “Rise” (and “The Pink Chateau” Movie Trailer)