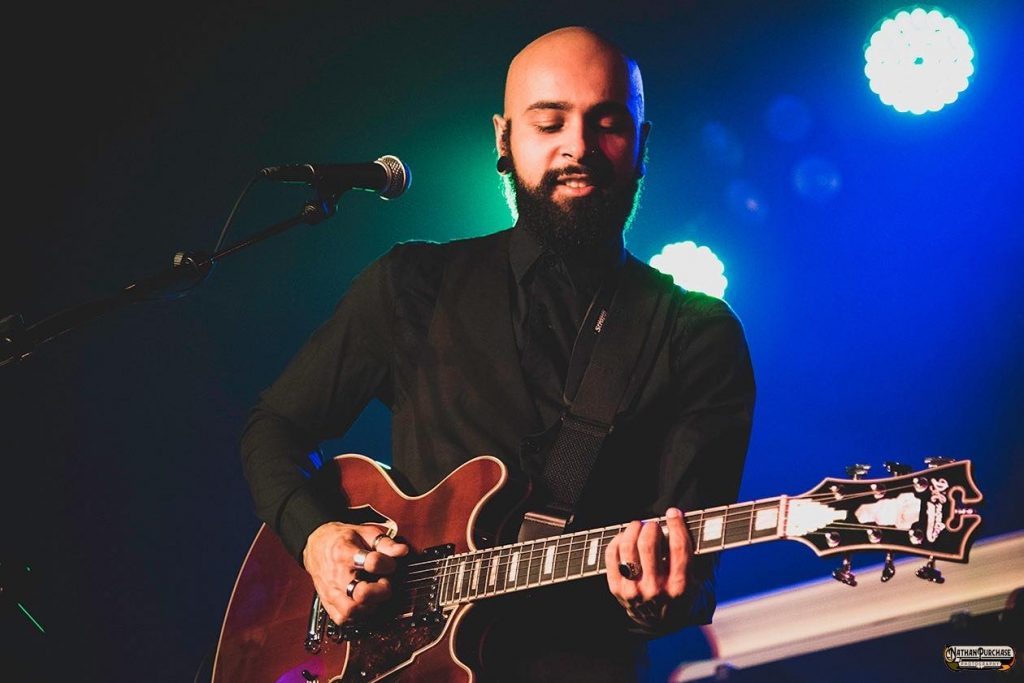 From the time he was a young child in Grand Haven, Elijah Russ has soaked up a boundless array of genres, starting with the smooth jazz and soul played by his musician father, Lew Russ, and the rootsy rock and country preferred by his mom.

Add to that his work with regional artists through his association with Grand Haven’s Walk the Beat, exposing him to the diverse music of Melophobix, Bluewater Kings, The Legal Immigrants, Gunnar & The Grizzly Boys and more.

“Walk the Beat was amazing,” said Russ, who booked dozens of bands for the one-day summer festival and band competition.

“I had to check out the bands … and go out and see them and meet them and eventually get to hire them and work with them and establish relationships and become friends. It’s how I met so many people.” 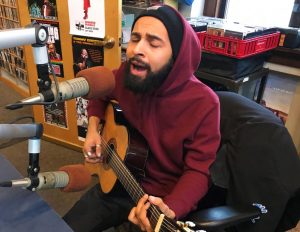 On the Air: Elijah Russ performing during Local Spins on WYCE. (Photo/Local Spins)

He’s also toured the country as a guitarist and backing singer for Harper & The Midwest Kind.

All of that might explain his own music’s mix of soul-rock, funk, blues, country, reggae and Latin music – displaying a “unique ability to translate these genres into his own language and musically connect with an array of audiences.”

Russ calls it “heavy soul rock,” with hints of other genres blended in, something evident in his debut single, “Mind Your Business,” recorded at Grand Haven’s Third Coast Recording Co. and released in September.

As the Grand Rapids-based multi-instrumentalist prepares to enter 2020 “in full swing” by releasing new music and video projects, Russ performed a couple of his songs in solo fashion for this week’s edition of Local Spins on WYCE. Check out a video for his rendition of a brand new song, “Emilia,” here with the full radio show podcast below.

Indeed, Russ will perform twice in Grand Rapids tonight (Friday, Dec. 27) with a variety of musicians at two different venues – first as a special guest with Hannah Rose & The GravesTones, opening for the Trippin’ Billies Dave Matthews Band Tribute at 20 Monroe Live. Tickets to the 8 p.m. show are $15-$25 and available online here. 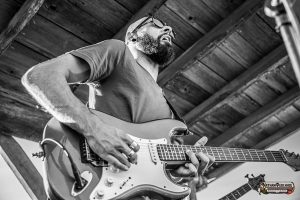 Russ hopes to record and release three videos and singles in coming months, including sessions with Dogtown Studio and Great Lakes Live, and possibly release a full-fledged album in late 2020.

All of it comes as Russ has immersed himself in a fast-growing West Michigan music filled with collaborative projects. Russ himself has sit in with several other bands, including Gunnar & The Grizzly Boys, Melophobix, The Zannies, The Legal Immigrants and more.

“I get my mind blown watching my friends play all the time. That’s so cool to be home and have that,” he said.

“There’s really amazing and important things going on here that I really really believe in and a lot of us believe in, and keeping it very alive and growing it exponentially. It’s a great time for music in Grand Rapids.”

In addition to Friday’s shows, the Elijah Russ Collective plays Tip Top Deluxe Bar & Grill on Jan. 10 (with Patty PerShayla & The Mayhaps and the Rage Against the Machine Tribute). He also plays solo at Hops at 84 East on Jan. 24 and hosts the open-mic session at 4 p.m. every Sunday at Champs in Middleville.

The Dec. 27 edition of Local Spins on WYCE – which showcases local and regional music at 11 a.m. Fridays on WYCE (88.1 FM) – also featured the on-air debut of tracks by Drinking Mercury, Feeding Grizzlies, Myron Elkins & The Dying Breed, The Fist Coalition and ADABOY!, plus tracks by The Go Rounds, The Bootstrap Boys, The Lippies and Earth Radio (this week’s musician’s pick by Russ).