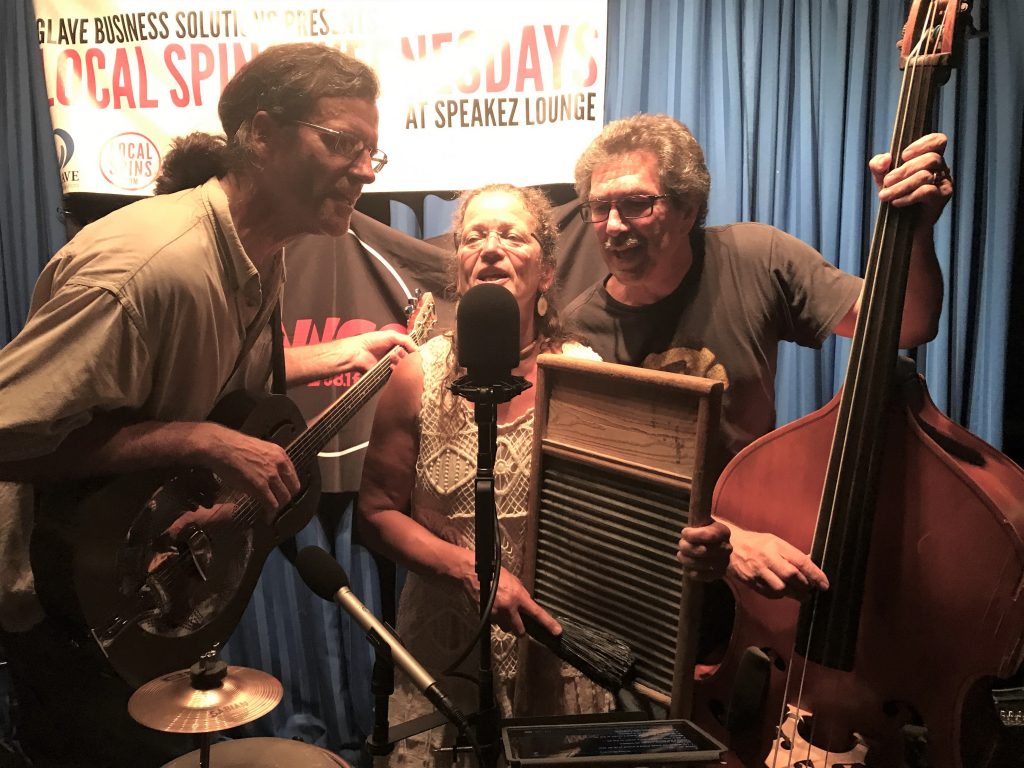 Doing What They Love: The B-Side Growlers performing for an enthusiastic crowd Wednesday night at SpeakEZ Lounge. (Photo/Local Spins)

For three decades, The B-Side Growlers have been digging up oldies – real oldies from the early 20th century – and pumping up Grand Rapids area audiences with these toe-tapping, vintage acoustic songs.

And while they never expected to actually record what they play, the trio has now done just that, recently releasing its “Home Brewed” studio album, chock full of those rediscovered classics, brought back to life in their own minimalist style with striking harmonies and an engaging flair. 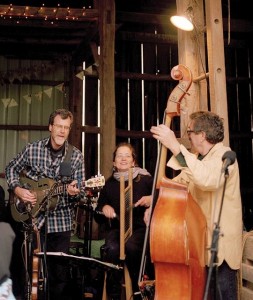 Vintage Tunes: The specialty of the B-Side Growlers.

“I just like the back stories to the songs and the history and why they wrote them and what was happening in the U.S.A. at the time,” bassist Matt Porter said of the Grand Rapids band’s penchant for covering songs dating back to the 1920s.

Before officially releasing the new album Wednesday night at Grand Rapids’ SpeakEZ Lounge, the trio made an appearance for Local Spins Live on News Talk 1340 AM (WJRW), along with Americana duo Michigan Rattlers. Listen to the full podcast here.

The B-Side Growlers’ deep repertoire of seminal blues, jazz, country and folk music includes a bevy of influential American musicians, including covering the likes of iconic blues singer Big Bill Broonzy, a late Chicago musician with local ties who worked at Circle Pines Center south of Grand Rapids, the same camp where the Buttermilk Jamboree music festival is held annually. The band participated in this year’s festival tribute to Broonzy. 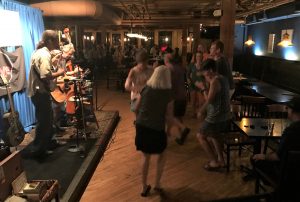 Dance Party: Fans of the B-Side Growlers at SpeakEZ on Wednesday.

Other tunes are familiar blasts from the past. “Pete usually picks out the tunes, and I find he picks out the ones I heard from my mom’s music,” Mary Lewandoski recalled.

Still, there was some reluctance to record and release an album, with Pete Lewandoski arguing they were principally “a live band” – and anyone who saw them in their lively, audience-involving CD-release show at SpeakEZ Lounge this week would certainly agree. (Check out a video below.)

But Porter eventually convinced them that releasing an album had merit. “I like to have a record of what we do, and this is our record,” said Porter.

Keeping in the spirit of the songs the band covers, the Growlers kept the recording process simple, tracking the songs live and only overdubbing vocals.

More information about the band is available online at b-sidegrowlers.com.