Viewers across the globe watched the live-streamed event hosted by the Michigan Music Alliance with sets by 40 artists who broadcast from their homes. The alliance kicks off a new online concert series tonight. 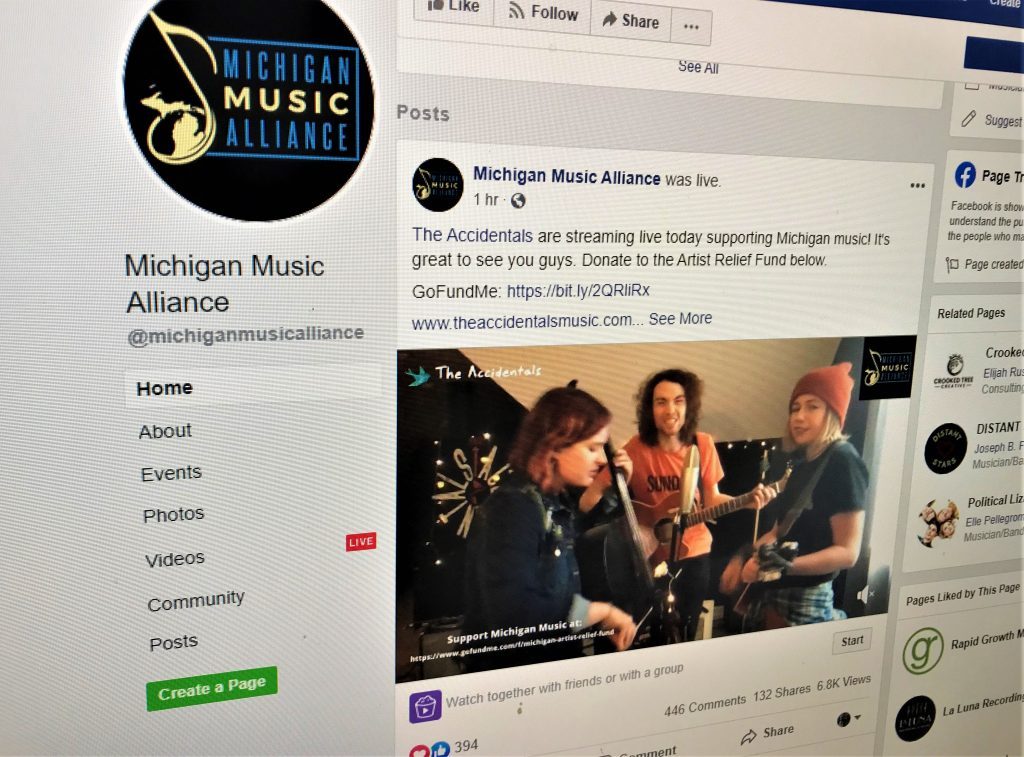 Racking Up Online Viewers and Donations: The Accidentals via Facebook on Sunday.

Put this one in the “success” column.

The Michigan Music Alliance’s first-ever, all-online “Spread the Music Festival” – which featured live-stream performances by 40 Michigan artists over the weekend – raised more than $11,500 to aid the Michigan Artist Relief Fund, with thousands of viewers from across the globe tuning in to the sessions.

“My favorite part was being able to see so much music and so many different artists from all over in such a short amount of time,” said organizer Elle Pellegrom of the Grand Haven-based Michigan Music Alliance and Crooked Tree Creative. 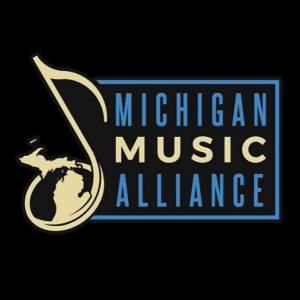 “Everyone who played has such a big heart, too. They all volunteered, artist helping artist, and it was amazing to watch some of them really share what quarantine has been like for them.”

Money raised from the event will be distributed to Michigan musicians who’ve lost income due to performance cancellations during the COVID-19 pandemic that’s scrapped tours and shut down bars and concert venues.

Many of them also were part of the four-day festival with performers live-streaming sets from their homes across the state, including Hannah Rose Graves, The Brandino Extravaganza, The Marsupials, Chris DuPont, Kaitlin Rose, Hayes Griffin, Political Lizard, Mark Lavengood, Carrie McFerrin and Cosmic Knot’s Tom Wall, who closed it all out before midnight Sunday.

Sunday’s show was like playing all the best venues in the state where everyone comes out to support what Michigan has to offer and the lineup was amazing thanks to Elle,” said Sav Buist of The Accidentals, which has embraced live-streams and raised enough money through other recent shows to help cover expenses through April.

“We watched a lot of the bands on the festival and so many of them we hadn’t had a chance to catch before. We have an incredible scene and Michigan is becoming known for that. It feels amazing to be part of that.”

ATTRACTING INTERNATIONAL FANS WITH A NEW SERIES KICKING OFF TONIGHT

Pellegrom said the sessions drew as many as 550 live viewers at a time. Most videos racked up about 1,500 views as of Monday morning, with The Accidentals’ video topping 11,000 views. Fans from as far away as the United Kingdom, South Africa, Australia and Germany watched the sessions.

Scroll down to watch a few of the most popular live-stream sessions; all of them remain available on the Michigan Music Alliance Facebook page and a wrap-up video of highlights is planned.

“The whole thing went really smoothly. Very excited about it,” said Pellegrom, adding that the festival likely would be repeated next year as the alliance’s “new flagship fundraiser. Our goal is to make the relief fund sustainable so that when something happens and someone needs emergency help, it is there.” 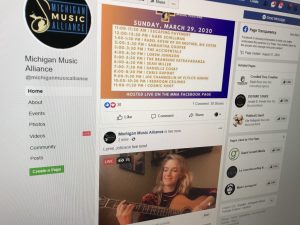 Hanging Out Virtually: Loren Johnson during her set.

Overall, the Michigan Artist Relief Fund has raised more than $15,600 since it was formed earlier this month, with 64 musicians so far applying for aid. Qualifying applicants will receive an average payment of $300, Pellegrom said.

Applications currently are closed, but will reopen again for Michigan musicians on Wednesday (April 1). Donations are being accepted online here.

Pellegrom said the sessions and upcoming live-stream concerts are a great way to stay connected with others amid the new social-distancing parameters.

“There was a moment where all of my old roommates and I were watching Lipstick Jodi together and got to hang out,” she said.

“It really helped me feel not so alone and like there were social activities I had scheduled, so I hope it did that for everyone else, too. Many people have messaged the page thanking us and the artists for making their weekend move by a little faster with great music.”