Local Spins offers a behind-the-scenes view of the adventures of a West Michigan band as it played the prestigious festival with stars of the folk and Americana scene. (Photos, video) 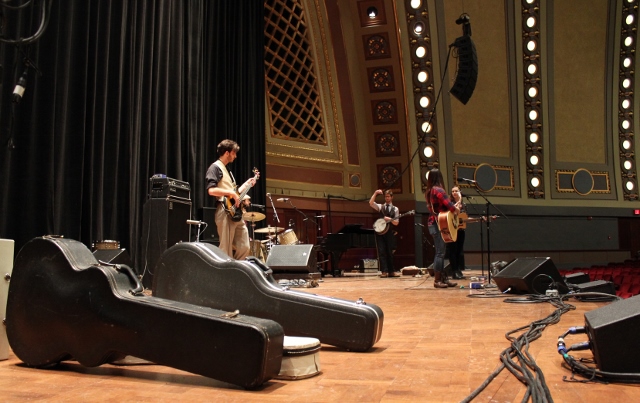 On the Big Stage: The Crane Wives during Saturday’s sound check in Hill Auditorium. (Photo/Anna Sink)

The Crane Wives readily admit this was a gig requiring an extraordinary investment of time, energy, fuel and emotion.

The Grand Rapids folk-rock band hit the road Friday and didn’t return until Sunday afternoon, putting hundreds of miles on their band van. They arrived at the venue to unload gear in a modest snowstorm at 11:30 a.m. Saturday for a performance that wouldn’t take place until 6:35 p.m. that night – a performance that had already sparked an “intense” band confab over songs to include in the set list.

Group members, joked guitarist-singer Kate Pillsbury, even discussed “contingency plans” in case someone broke a string “or an ankle” on stage.

“I had butterflies all morning,” guitarist and singer Emilee Petersmark conceded backstage, as the band waited for its turn at sound check, some six hours before performing for real in front of a sellout crowd. 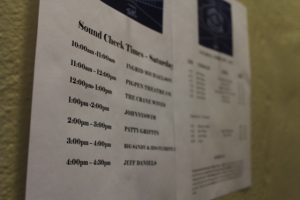 On the Bill: The Crane Wives (Photo/Anna Sink)

All that for a performance that lasted precisely 15 minutes, covering three songs. As bassist Ben Zito put it, it was over in “a flash.”

But make no mistake, it was worth every minute the band spent preparing and anguishing over details: The Crane Wives’ debut at the prestigious Ann Arbor Folk Festival last weekend was remarkably short but eternally memorable, a brief and entertaining romp in front of 3,500 enthusiastic fans at the historic Hill Auditorium. The crowd gave the grinning band a rousing ovation and then promptly snapped up almost all of the group’s CDs being sold at the merchandise table in the lobby.

“It felt like a roller-coaster,” banjo player Tom Gunnels gushed afterward in a text message.

More important, the high-profile appearance as an opener — the first of seven acts to take the stage on Saturday — allowed the five-piece Grand Rapids band to share the stage with a who’s who collection of Americana, folk and indie-rock/pop stars. They included Patty Griffin, Ingrid Michaelson, Jeff Daniels and Big Sandy & His Fly-Rite Boys.

It made them feel – for a while – a wee little bit like rock stars with their own dressing room (oh, OK, up three flights of stairs to a room shared with two other bands) and Green Room food supplied by the much-adored Zingerman’s Deli. 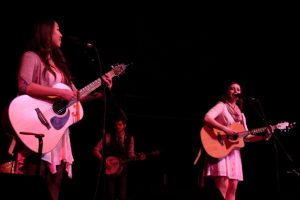 “We were standing in the way a lot of the time (backstage),” quipped drummer Dan Rickabus, noting that Beam bumped him at one point as he was passing by. “Sam Beam said, ‘Excuse me,’ to me. It was probably the most ordinary experience you can imagine for seeing one of your heroes. We had no ‘famous person’ reaction. We’re all just dudes.”

Pillsbury even gave Daniels a hug backstage at one point and Petersmark told Michaelson how long she’d been a fan, making the indie-pop artist “feel old” (which Michaelson recounted on stage).

SOAKING UP THE VIBES AND INNOVATION OF OTHER ACTS

Indeed, as thrilling as it was for the band to perform their songs “October,” “Easier” and “Safe Ship, Harbored” in the majestic, acoustically impressive Ann Arbor concert hall for a hallowed folk festival that The Ark has hosted for 37 years and build their fan base, it may have been just as satisfying to soak up the innovativeness of other artists.

They got the chance, Zito said, to see what other musicians “are doing with your influences” within the broad genre that is folk and Americana music, from the retro-twang of Justin Townes Earle to the indie-pop of Michaelson.
Band members also renewed acquaintances with pals in Michigan’s Appleseed Collective and struck up new friendships with groups such as the Pittsburgh-bred and New York-based PigPen Theatre Co., whose members nodded and smiled appreciatively as they listened to The Crane Wives’ harmonies for the first time.

In the end, after all the work, practice, travel, fretting and an adrenaline-pumping performance, The Crane Wives went home tired, happy and enriched in camaraderie and spirit, if not in finances.

“Everyone was so supportive,” Zito acknowledged. “It was a real community-building thing.”