Big music festivals are notorious for the disheartening amount of trash left behind. At Electric Forest, Electricology’s mission is to change the trend with a multitude of fun initiatives for festivalgoers. 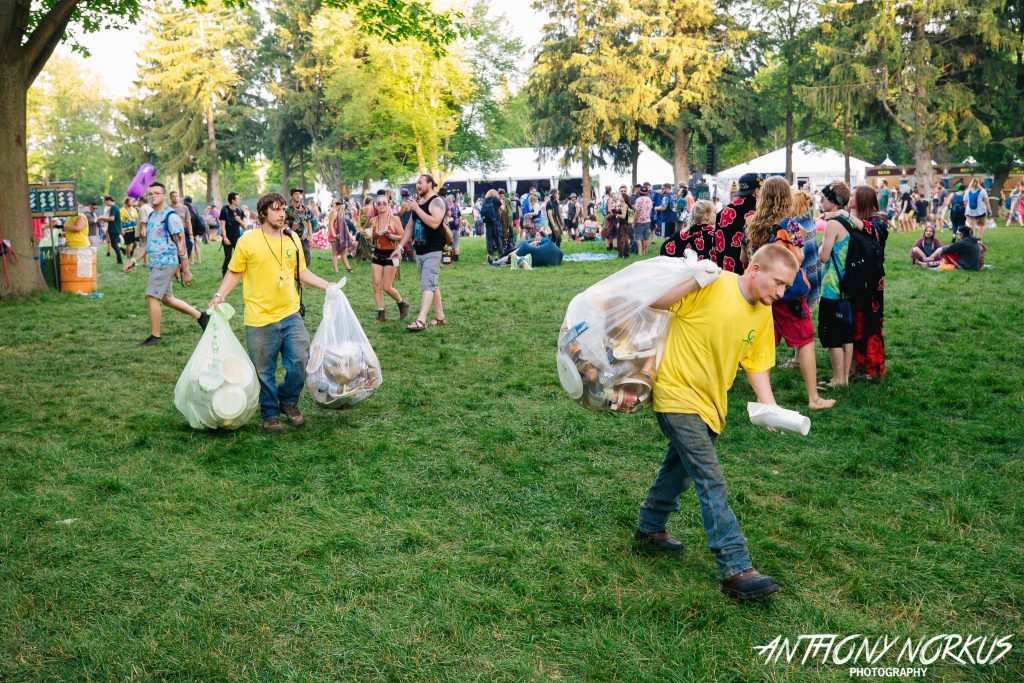 A festival attracting a city-sized throng of 40,000 people or more for a weekend of musical revelry creates more than an entertaining atmosphere and enduring memories.

It also creates tons of waste generated by festivalgoers and work crews. 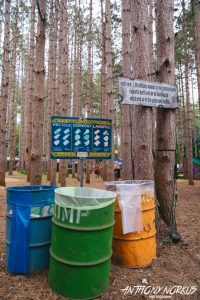 Three-Barrel System: The sight is a familiar one at Electric Forest because there are more than 1,000 of these on site. (Photo/Anthony Norkus)

But at Electric Forest — which could be described as a massive psychedelic wonderland — the Electricology program aims to minimize the impact that two weekends of bliss for rave-goers has on the forest and the environment.

Presented by the Grand Rapids-based High Five Program, Bright Beat and Gemini Production Solutions, Electricology is one of 24 “Plug-In” programs that are part of Electric Forest this year, programs that festival organizers maintain are truly “an invitation to add to the magic” of the event.

Electricology was created by Rachel Wells and her husband and partner, Seth Norton, after they realized they could tailor their previous sustainability efforts at other festivals specifically for the event in Rothbury — giving festivalgoers incentives to keep festivals clean, recycle and otherwise use sustainable practices “with a fun message of personal responsibility.”

“At the first year, my husband and I were helping out other bands and were disillusioned with how dirty it was. A festival is a utopia built for attendees and we want to make it as clean a possible,” explained Wells, noting they’ve run and honed the program at Electric Forest for seven years.

The High Five Program had already been created to help festivals with sustainability efforts, but Electric Forest deserved special treatment, partly because people from all over the world attend the festival. This year’s psychedelic wonderland unfurling this weekend and June 28-July 1.

WANTING EVERYONE AT THE FESTIVAL ‘TO RESPECT THIS PLACE’

“Michigan is an important place to focus on sustainability due to our abundance of natural resources,” she said, “so we want every person involved with the festival to respect this place.”

Wells has a team of roughly 40 people — many of them interns — to help carry out the sustainability goal: diverting 90 percent of total festival waste from landfills. Wells declined to provide specific figures as to the tons of trash and recyclables generated at Electric Forest, but there are more than 1,000 barrels placed around the sprawling Double JJ Resort festival site.

Electricology does much more than just supply recycling bins for the festival. The program has broken down the process into three crucial and easy to follow steps.

• RECYCLE – Campers and festivalgoers bring trash and recyclable items to “Ecozones” which utilize a three-bin system with separate barrels for trash, recyclables and compostable items. The compost is hauled to a farm in Zeeland, recyclables to Muskegon and the trash to a landfill.

• EARN – Campers collect EcoPoints for “Good Green Deeds” such as bringing trash to the correct bin or participating in one of the many contests taking place at the festival.

• REDEEM – EcoPoints can be used at any of the Electricology stores on site and for raffles. The top 50 campers with the most points get invited to an exclusive party and the person racking up the most points win a “Good Life” package for four to use for the 2019 Electric Forest festival.

Arguably, one of the most innovative elements to this initiative is the mobile Electricology store, better known as the prize cart. It even has its own theme song. Kyle Hollingsworth, the keyboard player for String Cheese, created the song, which has since been remixed and signals audience members to start bagging up trash immediately.

“When the song comes on, a mad frenzy starts as everyone sees the prize cart approaching,” said Wells.

When bags of trash are turned in, prizes from brands such as Auroravision, Bell’s Brewery, Eargasm, ENO, GloFx, Grassroots California, Sloth Steady, Vibedration and many more are earned on the spot. Electricology Stores are located at the venue entrance, Ranch Arena and Sherwood Court.

MORE DO-GOODERY VIA THE ‘WISH MACHINE’

Electricology workers aren’t meant to be “recycling police,” Wells insisted, but instead assist with the prize cart, work at the Electricology Stores, hand out EcoPoints when people put trash, compost and recyclables in the correct bins, assist with marketing for Electricology on social media and help educate campers on how they can make more eco-friendly decisions. They also assist with cleaning up areas in front of the stages and litter throughout the weekend, but that’s not the team’s primary purpose. 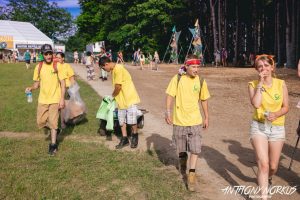 Teamwork: Many of those working at the festival come from area colleges. (Photo/Anthony Norkus)

Many of those on Wells’ team at Electric Forest are High Five interns from Michigan colleges, including many in the program from which Wells graduated: Music Industry Management at Ferris State University in Big Rapids. As a previous president of the Music Industry Management Association, she said she aims to give these students a chance to learn through hands-on operational marketing and work on their problem-solving abilities.

“A student going into the music industry who may not know exactly what they want to do has the chance to show their talents and learn new skills here,” Wells said.

Another example of do-goodery at Electric Forest this year comes courtesy of the Wish Machine program which rewards those who take steps to make their community a better place. In return, people who proposed positive actions submitted wishes to the Wish Machine, essentially asking for support from the festival. So far, 15 wishes have been granted and the list will continue to grow until the end of the festival.

Over 5,000 wishes were submitted just this year. This program prompted fundraising and created awareness for mental health, rare diseases and sustainability; donations of clothing, personal items and funds for disaster relief efforts; volunteering at local humane societies, hospitals and homeless shelters and much more. 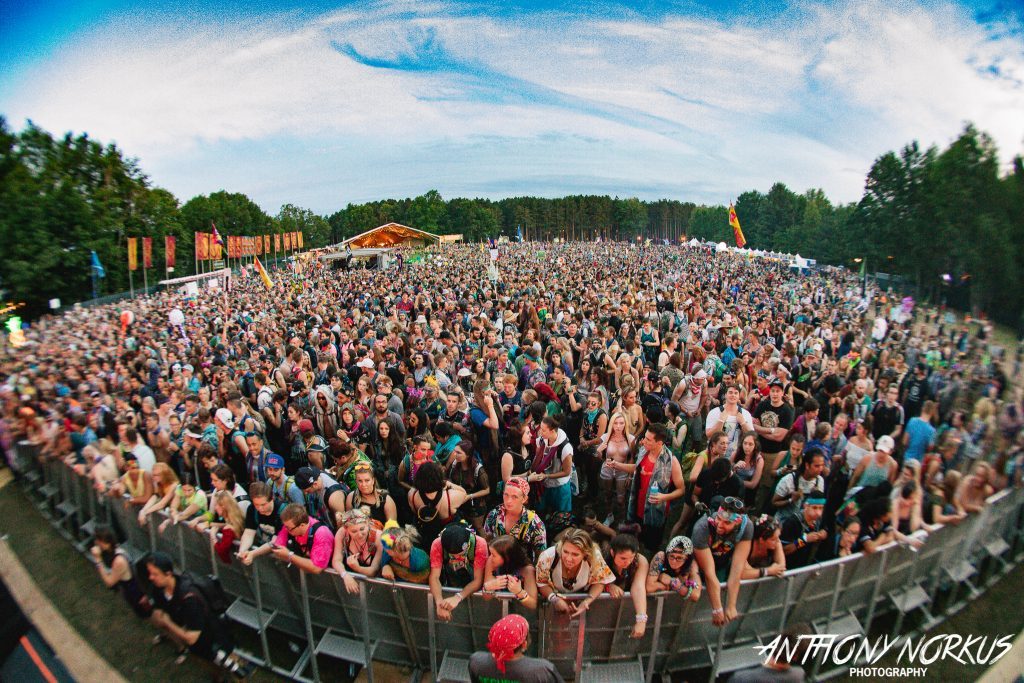 The Crowd: Some 40,000 or more are expected at The Forest. (Photo/Anthony Norkus)