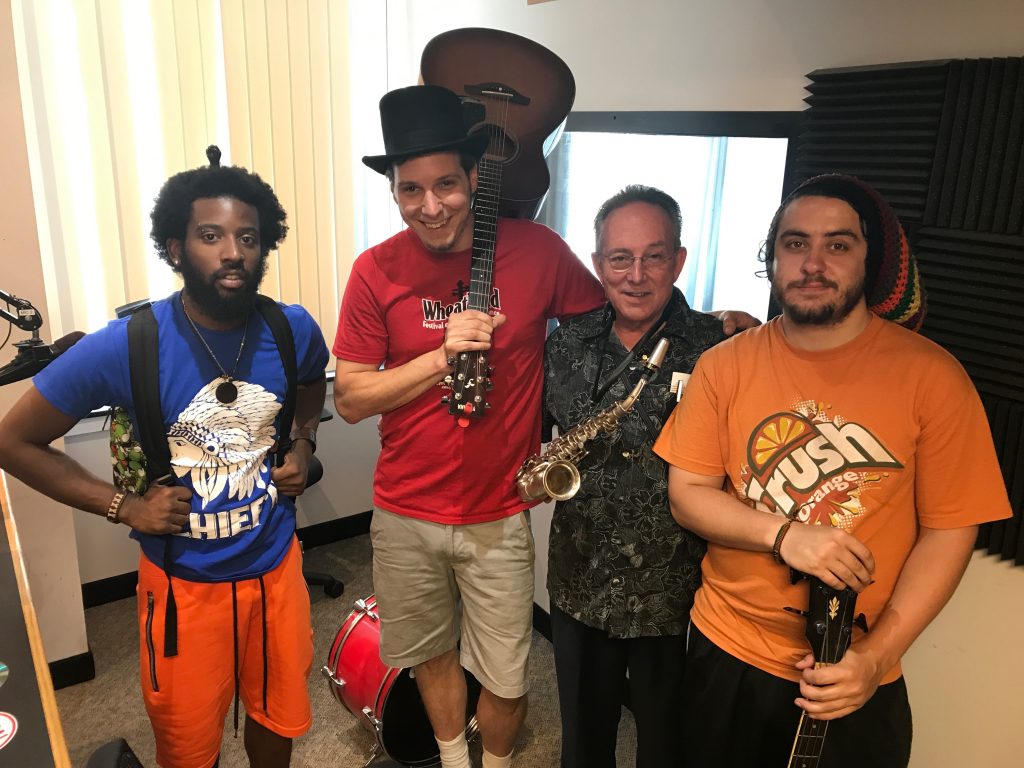 THE BAND: Cosmic Knot
THE MUSIC: ‘Gypsycore’-styled, progressive indie-rock with a message
WHERE YOU CAN SEE THE BAND: 9:30 p.m. Saturday at Founders Brewing in Grand Rapids as part of an album-release show with TruthInFiction and Mondo Mammoth; Aug. 4-6 at The Wish You Were Here Celebration at Bent Arrow Deer Ranch in Holton, Mich.; Aug. 19 at Walk the Beat in Grand Haven

SCROLL DOWN FOR VIDEO OF IN-STUDIO PERFORMANCE

Other than that, however, Cosmic Knot’s on-air debut for the Local Spins Live radio show boasted everything that makes this unusual West Michigan band stand out from the pack: singularly groovy and spirited music tuned to 432 Hz (as opposed to the traditional A 440 tuning) aimed at soothing and uplifting listeners, performed by a grinning guy in a top hat and Wheatland T-shirt with colorful garland wrapped around his microphone accompanied by equally cheerful musicians. 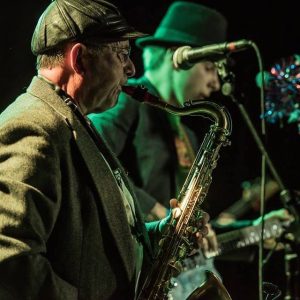 ‘Just Plain Fun’: Rolly Smith and Cosmic Knot aim to uplift with their music, too.

“We are trying to promote as much positivity as humanly possible,” says guitarist and singer Tom Wall, a Fremont native who fronts this Grand Rapids-based band.

“We play in a certain frequency (which some claim has healing properties), we compose notes in a certain way and we sing in a certain way that is designed to promote a healing effect on people, but will maintain the guise of modern day music. We feel it is all of our responsibility to make the world a better place and it can be achieved through education and elemental nourishment through clean food and water.”

Joined by Mario Copeland on drums, Rolly Smith on saxophone and flute, and Zach Gregory on bass, Wall has hatched something truly distinctive in the annals of regional music – a project that’s been 15 years in the making and influenced by Wall’s associations with an impressive array of Michigan bands and musicians, including Four Finger Five with Joe Sturgill, Hannah Rose & The GravesTones, All-American Funk Parade, Skee-town Stylee, Muruga Booker and others.

“I’ve sat in with so many bands, I couldn’t count them all,” says Wall, who officially settled on the current Cosmic Knot lineup last August at the Wish You Were Here Celebration he organizes on his parents’ deer farm every year. “Since then we have been working non-stop to manifest and perfect what it is that we do.” 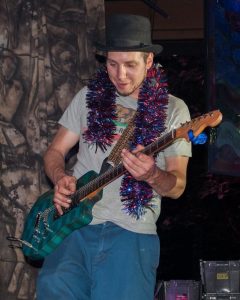 That includes spending more than 180 hours at Third Coast Recording Co. in Grand Haven recording and tweaking the band’s first album, an epic 11-track project. The music has been described as “gypsycore,” but Wall insists there’s much more to it than that, incorporating a host of elements and styles.

“We are intent on using music to improve lives, understanding and just plain fun,” says Smith, who’s been a fixture in several Grand Rapids area bands, including Afro Zuma, Skankadank and River City Stew, among others. “We are improvisational. Most of our songs take on new life each time we play them.”

For Wall, Cosmic Knot – a play on the word “cosmonaut” as well as a concept in physics – represents a significant next step in a long musical trek that began as a teenager when he performed with other musicians in a school gymnasium for the first time, eventually forming and playing in a succession of bands and organizing annual music festivals.

“Once you get nourishment into people’s lives, they begin to see things differently, they begin to feel different. That’s where the real change can begin,” he argues. “Our goal is to do what we love, but utilize it in a way that helps the whole of the community.”

To that end, Wall hopes to keep Cosmic Knot on stages and on the road as much as possible – maybe even touring overseas – with a follow-up album already in the planning stages.

“We plan on playing as many shows as we can muster,” he says, “and spreading the word of positivity wherever we go.”