Local Spins’ David Specht and photographer Tori Thomas experienced Buses by the Beach on Friday, capturing the fellowship and music of the event being held at Camp Blodgett. 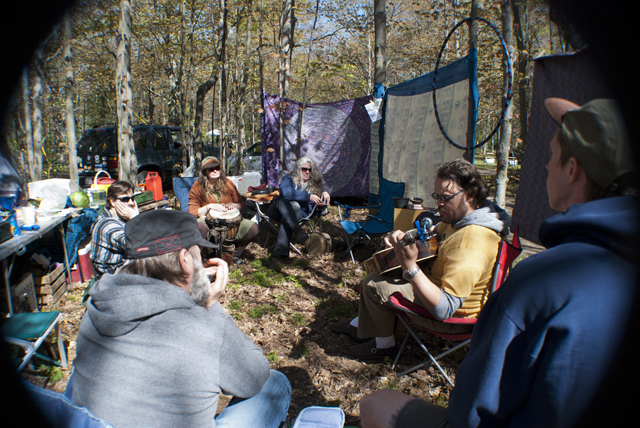 Gathering by the Lake: Buses by the Beach continues through Monday morning at Camp Blodgett. (Photo/Tori Thomas)

After venturing to West Olive in Ottawa County to spend Friday afternoon in the brisk lake-cooled weather, the roughly 200 Volkswagen bus enthusiasts attending the 13th annual Buses by the Beach truly needed something to not only stretch their legs, but to warm them up. 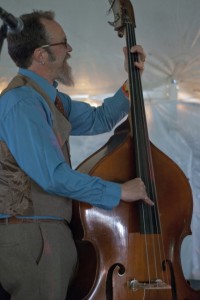 Jon Shears of Roosevelt Diggs performing at Buses by the Beach. (Photo/Tori Thomas)

With performances by regional acts Roosevelt Diggs, Nicholas James & the Bandwagon and Loose Meat Sandwich, it’s safe to say those in attendance found just what they were seeking along the shores of Lake Michigan.

By 7 p.m., Roosevelt Diggs – a four-man Americana/folk/country ensemble from the Grand Rapids area – had kicked off the evening, filling the main tent with heavy basslines and twang. The group’s set was stacked with original tunes so high-energy and fast-paced that those in the tent had no choice but to dance, especially as temperatures dipped into the 40s.
And while Roosevelt Diggs certainly knows how to keep the crowd grooving, band members also know how to tell a tale, with many of their songs paying tribute to classic American legends Casey Jones, John Henry and Pecos Bill, featured on the group’s “American Folklore” album.

Building off of the energy Roosevelt Diggs had generated, Loose Meat Sandwich – a folky cover band that appears mostly at VW campouts – brought ’60s and ’70s classics by favorites such as Janis Joplin and Three Dog Night.

And just as the opening act paid tribute to the American folklore greats, Loose Meat Sandwich, joined by harmonicist Logan Duddles of Roosevelt Diggs, dedicated Bob Dylan’s “Knockin’ on Heaven’s Door” to one of their greats who recently passed away: John Meeks. 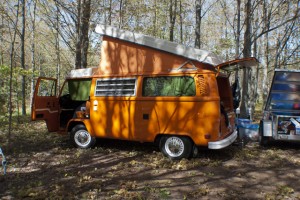 VW buses of all kinds and colors can be found at Buses by the Beach. (Photo/Tori Thomas)

“He was the creator of Vanagon Rescue Squad (a group dedicated to rescuing and repairing broken down vans),” said David Wheatley, frontman for Loose Meat Sandwich. “If you haven’t met Vanagon yet, get with it, and realize that a lot of this weekend is going to be thinking about John Meeks as well.”

Paying tribute to another American classic, Grand Rapids’ Nicholas James and the Bandwagon took the stage the fifth straight year, closing the evening with a blend of Dylan tracks and original works, including the honorary theme song of Buses by the Beach, “Bus Life,” with the line, “Hop on the bus.”

‘THRILLED BY THE SAME EXPERIENCES’

While band frontman Nicholas Thomasma admittedly does not own a VW bus, the song hits home for many at the festival, even those driving cars, vans and trucks.

“Buses by the Beach is about getting together with friends and family who are thrilled by the same experiences we are,” explained Beth Wharton, who traveled to the festival from Indiana for the fourth straight year in her 1977 VW Kombi station wagon.

“After traveling to these Volkswagen campouts, you start to know everyone, and before you know it, you’re eating together, enjoying music together and repairing each other’s buses.”

Fortunately for Wharton, and the hundreds of bus enthusiasts joining her this year, there is plenty more to come Saturday and Sunday, with notable acts ranging from Fauxgrass and Delilah DeWylde to Serita’s Black Rose and The Muteflutes. See the full weekend schedule here; day passes are $35 and available at the gate.

“I’m looking forward to the Red Sea Pedestrians,” Thomasma said. “They are a klezmer/gypsy band from Kalamazoo with a ton of talent. They’re playing on Sunday. Also on Sunday are The Muteflutes. Their new record, ‘American Dream,’is just beautiful and I’m excited to see them play it live.”

The Bandwagon @ Buses by the Beach (Photo/Tori Thomas)