The popular multi-city music festival returned Friday for the third time to show some love to the city of Grand Rapids, and the city — or at least, those packing Belknap Park — gave it right back. 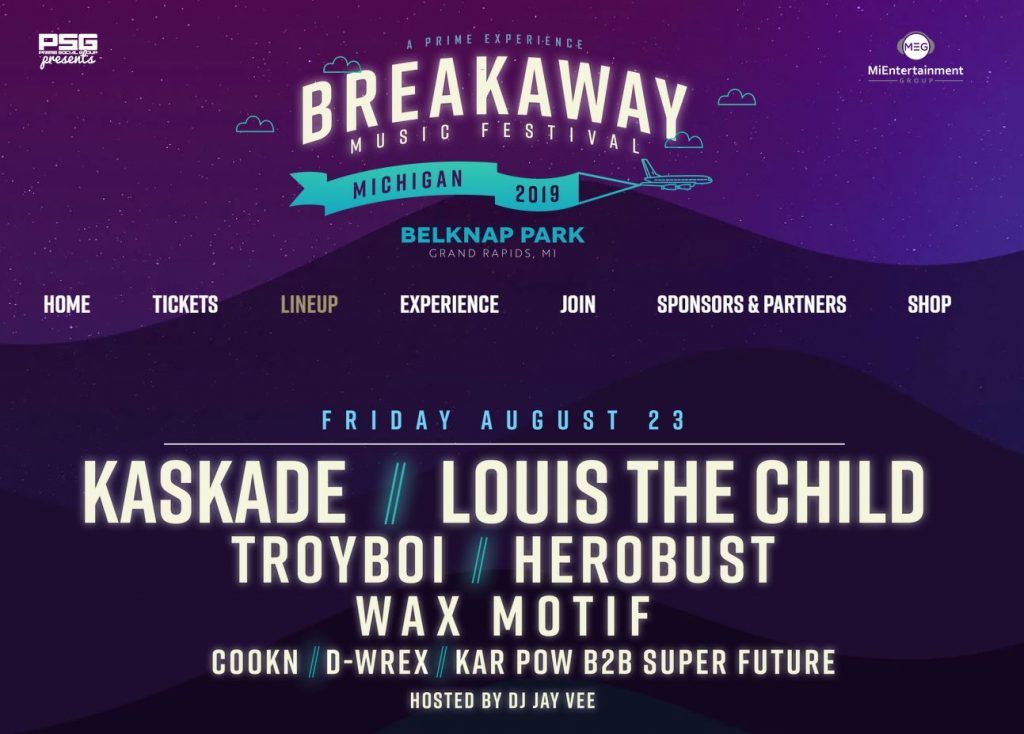 You could feel it a mile away.

The intoxicating beats and thumping bass pulsed through the city like a heartbeat, pumping the streets full of life to let everyone know that Breakaway Music Festival had returned to party in Grand Rapids once again.

The 2019 iteration of the “fastest growing multi-city music festival” kicked off its Beer City stop at Belknap Park on Friday with a diverse lineup of DJs and electronic artists from all across the country — and in the case of London-based producer Troy Boi, across the pond.

Other artists on the bill Friday included Kaskade, Louis the Child and Wax Motif, each bringing its own unique presence and musical stylings to the stage. Michigan DJs Cookn and D-Wrex made sure the mitten state was well represented, too, with Cookn also being one of the only repeats from last year’s lineup.

Despite being a smaller festival in comparison with Lollapalooza or Coachella, Breakaway has the advantage of being able to alter its lineup slightly from city to city, making sure each location in the circuit gets a unique experience.

Electronic music fans and avid festivalgoers Al and Tim said they love coming to Grand Rapids for that reason, despite having attended shows in bigger cities with higher-profile artists.

“Especially for a newer festival, Breakaway has a pretty good lineup,” said Al, who traveled Friday from the Ann Arbor area to attend the festival.

All of the artists brought something to the stage Friday night, but it was the final two acts of the evening that really got the crowd fired up: Louis the Child and Kaskade.

LOST IN THE MUSIC

Chicago-based DJ and production duo Louis the Child took the stage around 8:30, treating the crowd to a full on dance party for their hour in the spotlight. Expertly weaving hits from different genres in and out of their original material, they were able to create a setting where fans could lose themselves in the music.

Some fans were familiar with the music and some weren’t. But at an event like Breakaway, things like that don’t really matter, especially when the artists bring such an engaging presence to the stage. Sometimes that presence means creating the perfect party; other times, it means encouraging everyone to just be in the moment.

“All right Grand Rapids,” one member of Louis the Child shouted at one point. “On the count of three, I want you to throw your arms up in the air. Just let go of any troubles on your mind and be free for one second.”

Everyone obeyed, the music came to a brief halt, and bright lights washed over the crowd in a few short seconds of unity. The duo may sing that “there’s no love in the city,” but that couldn’t have been any less true as they walked off the stage to an uproar of cheering voices Friday night.

Veteran DJ and record producer Kaskade closed out the evening with a lengthy set of house music, flowing smoothly between tracks in a tight-knit fashion that kept the crowd at Belknap Park in a trance right up until the end. The 48-year-old brought undeniable energy with his unique blend of various styles of house music.

Prior to Kaskade taking the stage, one enthusiastic fan offered advice on how to properly enjoy one of his shows.

“When you’re in the middle of it, that’s where it’s at,” he said. “You can feel the vibe of the crowd, whether it’s good or bad. Don’t go around the outside, don’t go around the perimeter; just push your way in. You’ve gotta say, ‘Excuse me, sir,’ and just get in there.”

Many fans were likely already preparing their bodies and minds to do it all over again the next day as they filed out of the festival grounds after Kaskade’s set, feeling revved-up and exhausted all at the same time.

The festival continues today (Saturday) with Emogee and Stratz in the afternoon, with bigger names like Blackbear and Wiz Khalifa taking the stage later in the evening.