The band which plays The Pyramid Scheme on Friday night plans to follow up its high-energy 2019 EP with a full-length album later this year. The Local Spins Artist Spotlight with videos. 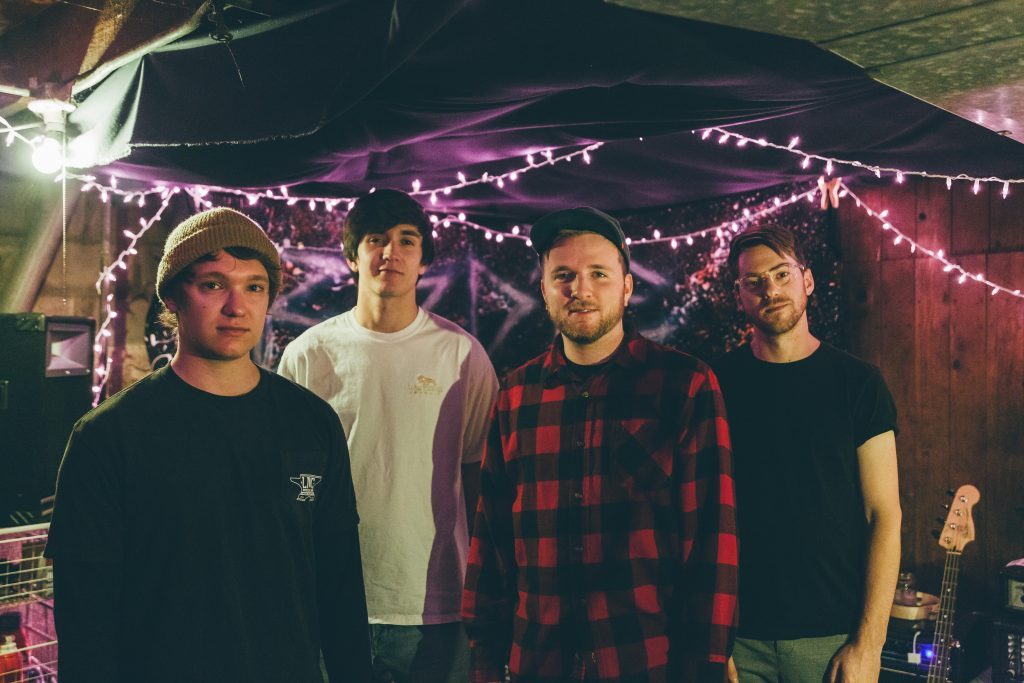 Taking Themselves Seriously But Having a Good Time, Too: Birdie Country in its rehearsal space. (Photo/Kendra Petersen-Kamp)

SCROLL DOWN FOR VIDEOS AND TO LISTEN TO BIRDIE COUNTRY

As I get out of my car to find the East Grand Rapids house where I agreed to meet the band, I struggle to see the address number in the dark.

“Come on down, door is open,” Clark texts me. 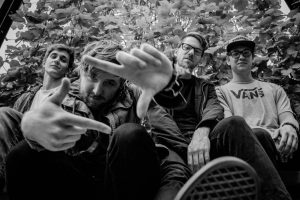 Christmas lights are strung around the basement for a cozy feel, as well as a humongous banner with the band’s name in big, bold letters. I take a seat on the couch until the song is over — absorbing the unique dynamic of the punk-rock group with infectious pop sensibility.

“We don’t want to be overly charming,” Clark quipped, “because then it seems like we’re trying too hard. But then we also don’t want to be too optimistic and get our hopes up all the time.” Clark said.

Birdie Country’s latest release — the aggressive, high-energy EP, “Hit ‘N Run” — was written in the spring of 2019 and released in June. The quick turn-around speaks to the band’s level of resourcefulness: They’re as DIY as it gets.

Clark records and mixes all of the band’s music. Bassist Taylor Robida is a videographer, Bonnette is a graphic designer, and drummer Jake Gagne is the “young energy” that holds everything together.

“As opposed to our album, it’s a lot more polished,” Clark said of the latest recording.

“And I think since I was doing all of our own production, it was more of a test. I wanted to record stuff like that right then, because I wanted to see if I could. I wanted to make it sound really polished and really poppy.”

The band plays The Pyramid Scheme in Grand Rapids at 8 p.m. Friday (Jan. 3) with Pretoria, If Walls Could Talk and The Skinny Limbs. Tickets are $12 for the all-ages show; doors open at 7 p.m. Details online at pyramidschemebar.com.

Back in November, Birdie Country won a local competition to open for New York rock band Bayside at The Intersection. To rack up votes, Robida used his videography skills to put together a campaign video that they believe got them the win.

With a name borrowed from a disc-golf reference, Birdie Country became a solid band in August 2017. Drummers and bassists came and went while playing small shows and recruiting bands to play at the Grand Rapids house venue, Quarry House.

Through the house venue, the band met other artists with whom they jelled and organize a headlining show at The Pyramid Scheme in August 2019, generating their biggest turnout yet with Hexing from Muskegon, Antighost from Detroit and Dogleg from Ann Arbor. Scroll down to watch a video from the show.

“It was a great turnout, and a lot of people were there to see every band. It was more of a culmination of our years’ worth of efforts building a community of people that all like the same kind of music, and then we put together an all-star show of our favorites.”

With their lineup solidified, band members feel more confident than ever in performing and establishing a stage presence.

Robida, formerly of the Grand Rapids band Valley Girl, once thought that his comfort on stage was due to his experience, but now he believes that it’s the unique dynamic of this group that is responsible for that feeling.

”I feel like it translates a lot in our performances that we’re having fun,” Robida said. “You see some bands sometimes that take themselves a little too seriously. We take ourselves seriously and we treat everything with professionalism, but we’re doing it because we want to have fun. So when we go out and play, it’s not an act, we’re having a good time.” 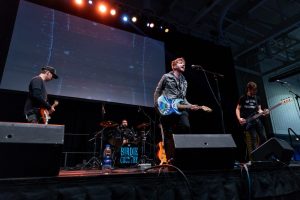 Added Clark: ”Jake is always right on time with where we are in the song, so is Taylor with the bass, and then Sam is just killing it on his guitar parts like always, and I’m just like, ‘This is awesome, I don’t even have to care. I’m just doing whatever I do.’”

Group members are highly passionate about making each concert an experience, instead of just showing up and playing the songs on their set list. During their headlining shows, they set up a collection of old TVs that play animations set to their music.

The tight-knit nature of the group is also due, in part, to the fact that Clark, Robida and Bonnette all live together in the East Grand Rapids house. And when they’re feeling uninspired, they write about each other’s lives.

“Sometimes if I don’t have anything going on in my life and I’m writing and have a cool melody I’m like, ‘Well, f—, what am I supposed to write about?’ ” Robida said. “Well, Matt’s sad, let’s write about his stuff!”

“I was mad at one of Taylor’s ex girlfriends so I wrote a song about her and him, and then she hated him forever,” Clark added, as the whole group laughed in memory of the song.

Right now, they’re in the thick of writing their second full-length album, expected in late 2020. They feel that it’s a return to form to their 2018 album, “Something to Say.”

“I’m excited to see where the new stuff goes because we’re writing a little bit more like we were before, but we have that production level now,” Clark said. “So it’ll be interesting to see how it all comes together.” 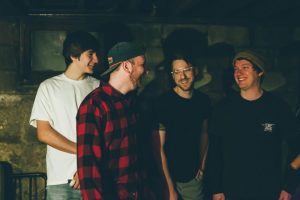 Busy Weekend: Birdie Country kicks it off with a show at The Pyramid Scheme. (Photo/Kendra Petersen-Kamp)

And while they like the sound of having music as a full-time career, they also feel that Grand Rapids is the perfect city for the band to thrive.

”It’s so cool when you get to bring other bands in and show them how cool our music scene is, and watch them be excited to play a full show in our city,” Robida said. “Sharing that here is really cool. We understand that if we can get the community coming out to local shows, we all win.”

“It’s a pretty intimate city,” Clark added. “We see the same people at a lot of shows, but they’re always into it and they’re always really interested to find out about the new band. The people that come to our shows here that live in Grand Rapids have such faith in us and the other bands that we play with.”

The band plans to play more regional shows in 2020, with several on tap this weekend.

Listen to the 2019 EP here: https://birdiecountry.bandcamp.com/releases