The legendary Grand Rapids DJ and radio personality finally revealed this week the medical issue and surgery that’s kept him out of the public eye in recent months. Today, Local Spins shares his story. 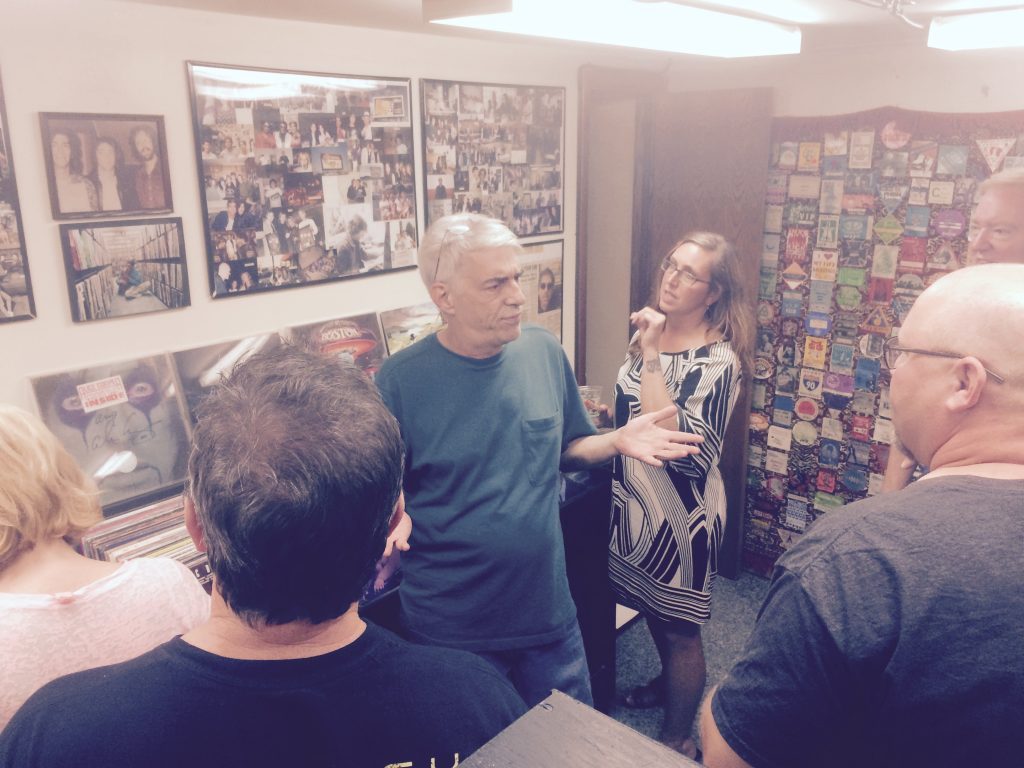 Holding Court: Aris Hampers and some of his historical artifacts. (Photo/John Sinkevics)

EDITOR’S NOTE: Longtime Grand Rapids DJ Aris Hampers represents a legacy of groundbreaking rock ‘n’ roll radio, part of WLAV-FM’s progressive, landscape-changing format in the 1970s that influenced artists regionally and nationally with help from a familiar crew of memorable on-air personalities. And his tales of that milestone era and beyond have regaled many of us over the years. But recently, we haven’t heard those stories, or seen Hampers, despite efforts to contact him. This week, Hampers finally revealed via Facebook why this iconic voice has, sadly and ironically, disappeared. He gave permission to Local Spins to re-publish this personal essay — and we are hopeful that he’ll continue to share his stories in coming months with Local Spins in words, if not in that oh-so-familiar voice. – John Sinkevics

I figured it was time to finally speak out as to why I’ve been absent here on Facebook and from life in general for the past six months. I’ll try to keep it short and avoid becoming maudlin since that’s not my style and it really benefits no one.

Nearly four years ago. in February 2016, I started to notice a very subtle change to the bottom end of my voice and decided, when I went to get my ears flushed, to have an ear, nose and throat physician take a quick look at it. He did a scope of my throat and found nothing. I chalked it up to getting older and a natural change for a person who spent most of his life ‘talking’ for a living on the radio, not to mention a smoker since my freshman year in high school. 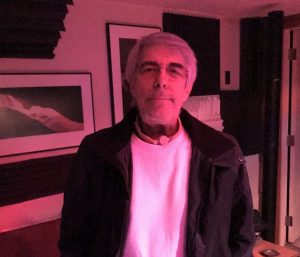 It ever so slowly got worse over the next three but a lack of insurance in the beginning and a general ‘so what’ attitude prevented me from following up on it. Ironically, as it got to a point where it was really noticeable, I suddenly got more offers than I had in years for voice work, guest podcast requests and even an offer to go back on the radio for a full-time afternoon air shift. After much thought, I had to decline that offer because I felt my voice was eventually going to get worse.

When it got to a point last Winter that I could no longer converse in an even mildly noisy room, and since I now had insurance, I decided to get it checked again. He (the doctor) found a mass beneath my voicebox but was still initially stumped, since he said he hadn’t seen that before and it wasn’t common. From then on, it was a succession of tests and exploratory surgery from doctor to doctor (including a CT scan showing early emphysema) until finally being diagnosed as to what I suspected all along:

A 1-1/2-inch cancerous tumor on my windpipe: my reward for 55 years of heavy smoking.

On the plus side, it was “non-invasive” cancer, meaning not only was it not going to spread anywhere else in my body, but it also eliminated any need for chemotherapy. On the down side, the tumor had already severely damaged my voicebox/larynx to the point that it could not be saved.

The only way for me to survive was to have it removed. 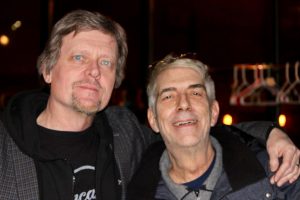 Before the Surgery and Diagnosis: Hampers and Local Spins’ John Sinkevics. (Photo/Brad Miller)

It was a 14-day stay in the hospital requiring two surgeries equal to the cost of a mid-sized home on the West Side. I remember my first thought when I awoke from the first surgery unable to speak” It was simply, “It is what it is” — the only way I could mentally and emotionally accept any of this.

Ironically, those were Ric Ocasek’s final words to his family before he passed. Not surprising: We’re both from the same school and we both made some bad choices (he was a heavy smoker as well) and I’m sure we both knew the risks. The entertainment/music business is filled with bad health choices and I dabbled in all of them over those 40 years before retiring. Spending the rest of my life thinking ‘regrets’ will change nothing, so I refuse to even acknowledge them.

On that first day after surgery I was relieved with every nurse/doctor who mispronounced my name since I just wanted to get through this anonymously and get home to recover. But by Day Two, as word spread and doctors/nurses helped me in and out of bed or to walk the halls for blood circulation, etc., there were more and more “I grew up listening to you” comments which made it much more difficult even though it felt pretty good to know that, if I don’t get through this, it’s apparent I had made a positive difference in at least some people’s lives. After the seven-hour surgery, the conclusion was the tumor and all remnants were successfully removed.

COMING CLEAN, RECOVERING AND A PLEA TO SMOKERS

I felt the need to come clean now since … word was spreading that I only had a short time to live. None of that was even remotely truthful.

But now I must profusely apologize to the MANY of you who texted, emailed, called on my cell, etc., asking questions and were completely ignored by me. I am SO sorry for doing that, but I needed to focus on my recovery and rehab without the distractions of 24-hour continuous texts to everyone on my friend lists especially while in the hospital where it was impossible to get more than 20 minutes sleep at a time. Please accept my apologies for that. It was the only way I could get the rest to recover. Hopefully, you will understand.

Missing the Pup: Hampers and his beloved Asia. (Photo/John Sinkevics)

There are a handful of people that must be thanked. These people spent a good chunk of their time to really help me get through this: Wendi & Bruce, Mitch, Stephanie (with daughters Sloan and Drew who made hand-drawn get well cards for my hospital room), Mark & Lori and Sam & Bob. It wasn’t easy for any of these folks to keep all of this under wraps, so I can’t thank them enough for doing so.

There are too many of us fighting these fights — Darla Jaye and Jay Allen Swieringa, both former radio partners of mine are currently dealing with cancer issues and supertalented local musician John Sanger recently won his fight. Nancy Yerkes, a brilliant artist and a longtime friend who designed the logo for my Disc Shop, lost her battle much too quickly a few months back. I was too ill to talk to her before she passed.

All of this sickness is just crazy. 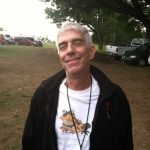 All Those Stories: Hampers

Do I really need to say this? Are you still smoking? If so, just STOP! The new numbers are in: Only 12 percent of the world population is still doing so. That means 88 percent are not doing something stupid that you ARE doing. I’m your latest poster child. Think of all the friends you’ve lost over the years when you light up that next one and how absolutely s—-y it really tastes.

Staying close to home more than in the past, I’ll have the time to do more archiving and posting of the many things that I still need to do regarding “Rock Search” videos and archived radio shows that hopefully many of you will find entertaining — especially the participating local musicians. I’m the only person with all of this stuff and I’m determined to get all of it out there before I drop.

And it goes without saying that not being able to speak was not how I envisioned spending the winter of my life, but after finishing five weeks of daily preventive radiation treatments last week, and even though only time will really tell, as of now, I am cancer-free.

Cancer took my mom 30 years ago. It also took my sweet Asia a year ago (I still miss that pup every single hour) and even though it tried to take me, it failed.

I may be broken, but I’m still here.