This late March roundup of Michigan releases ranges from rock and hip hop to synth-pop and folk. Read the reviews, listen to music from the featured artists. 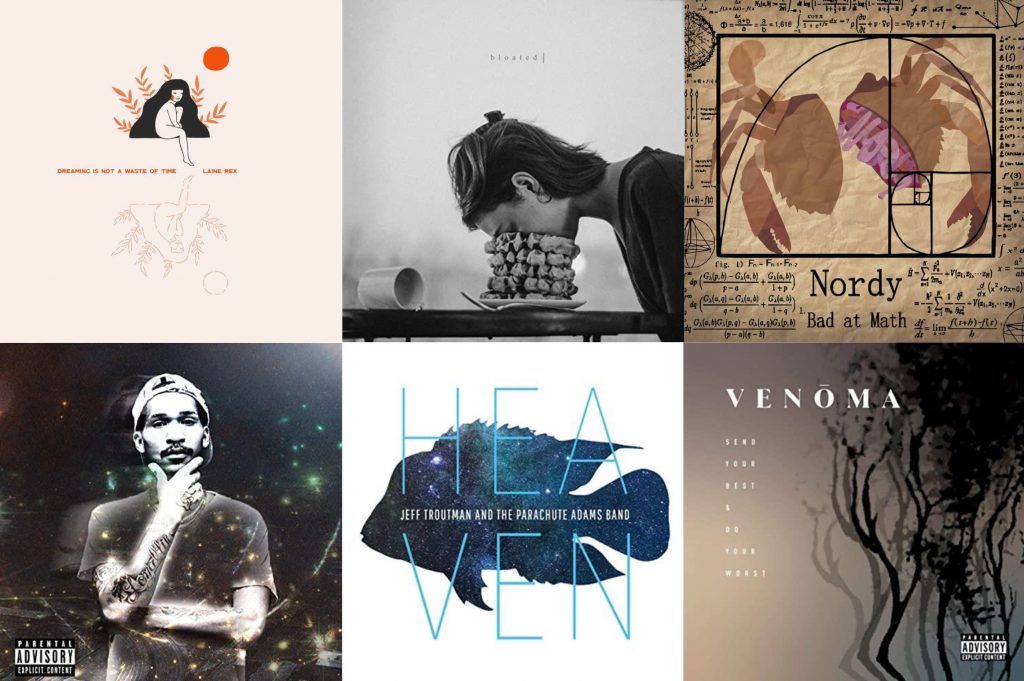 It’s been a long pandemic road — longer, and tougher, than most musicians and fans might have expected when things first began to fall apart in March 2020.

But more than a year later, Michigan musicians continue to step up and step out with new material, producing fresh tracks for music lovers to embrace, just as warm weather arrives and the prospects of live music begin to return.

Today, Local Spins rounds up a half-dozen new West Michigan releases covering a bevy of styles. Check out the reviews and listen to tracks from each recording. And find earlier album reviews online here. 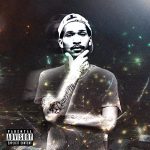 What Stands Out: Grand Rapids rapper Lucky Da Realest’s debut album is vulnerable in a variety of ways. Broadly, the lyricism feels personal and raw, with Lucky sharing pieces of himself in a way that’s honest and engaging. The album also boasts relatively tight production, with some sharp drum kits held down by beefy 808s. Lucky’s delivery focuses more on telling a story than playing with an unusual flow. At the same time, “They Don’t Know” highlights everything that Lucky does well between a few pitfalls. Looking past a muddy instrumental here and a bar that doesn’t land right there, the album has some infectious charm.
Digging Deeper: A conflicting aura surrounds the album’s opening title track, “They Don’t Know,” sitting somewhere between a bouncy production with rich 808s and snappy snares and some personal lyricism that dives into suicidal thoughts, honesty and regret. These points converge on the central point of pressure making a diamond out of a troubled past. Out of the burdens of his past, Lucky proudly declares that he intends to carry on, leaving the track on an inspiring note that ties everything together in a triumphant way. “Cryin’ out” occupies the same space, but cranks up the production’s hype. It feels like some of the heavier lines don’t land as well, but there’s a charming, upbeat element to the instrumentation that’s hard to scoff at.
Perfect For: A weekend hype session around the house. – Nick Moran
Website: https://www.facebook.com/AAOLuckyDaRealest
Listen: “They Don’t Know”

What Stands Out: It’s difficult to believe “bloated” represents the first full-length release from the Grand Rapids-based singer-songwriter Emma Bieniewicz. The magic of this album stems from its simplicity: Bieniewicz has a knack for creating lush, full, transcendent soundscapes that are neither cluttered nor overworked. “bloated” is lyrically vulnerable, exploring both introspective and interpersonal territories and examining topics such as relationships, internal dialogues, and struggles with body image.
Digging Deeper: One of the sonic treasures of this album is Bieniewicz’s vocals, which are breathy yet grounded in conviction. Tracks such as “mornings” feature Bieniewicz’s lovely vocalizations, bringing to mind highly esteemed and revered artists Weyes Blood and Harry Nilsson. Emma’s prowess as a singer-songwriter is matched by the talented production from Jeremy Hoekstra (Storybook Music) and Ryan Jamgotch (Electric Moon Studios). This album will be added to my own library, and I eagerly await Bieniewicz’s next release.
Perfect For: Introspective stargazing in Northern Michigan; soul searching; 4 a.m. phone calls. – Tyler Gargala
Website: https://www.facebook.com/emma.bieniewicz
Listen: “fruit bars” 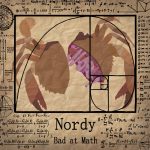 What Stands Out: There’s something about the opening guitar riff on “Bad at Math,” that seems to aimlessly drift from your speakers and fills a room. It lingers through echoing production, a smattering of grainy samples and freeform drum fills like smoke after a candle is blown out. Then, Nordy lights the flame, rinses and repeats. A project created between Grand Rapids-based singer-songwriter Matthew Noordhoff, bassist Alex Yeomans and percussionist Matthew Loveless, “Bad at Math,” feels like a mixed drink. Tracks strike a balance between brash, in-your-face leads and suave breaks. The album is perplexing and interesting, with tracks that go down smooth and warm while others leave a complex, bitter note.
Digging Deeper: Nordy takes a lot of risks that pay off. The best example? “Song From a Well,” which brings in seemingly autotuned vocals, punk-inspired breakdowns and math rock riffs. The track successfully uses this odd musical juxtaposition to build up and release tension in a really engaging way. The autotune feels out of place and distracting, but the payoff is an intricate, artful guitar portion to guide the track back down to Earth. Nordy feels at its best when it keeps listeners interested, and tracks like “Running for Office,” take the cake there. Noordhoff’s musicianship feels nearly surgical, with precise riffs that are elevated next to Yeomans’ locked-in bass and Loveless’ constantly adjusting drums. The track demands your attention, and the more you give it, the more layers of brilliance you receive in return.
Perfect For: Math rock, punk and alternative diehards looking for something peculiar or askew. – Nick Moran
Website: https://www.facebook.com/Nordymusic/
Listen: “Running for Office” 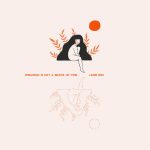 Laine Rex
“Dreaming is Not a Waste of Time”

What Stands Out: It’s always intriguing when the member of an established band ventures out on her own because it often reveals the true musical passion of the artist. Such is the case with Erin Dickson, keyboardist for Grand Rapids’ Boy from School, who recently released her first EP as Laine Rex – a four-song project brimming with airy, synthesizer-drenched bedroom pop with melodic hooks and soaring vocals. The opening salvo of “Money Down” launches a journey through infectious electronic gems culminating in the EP’s triumph, “For A While Now” – building from a whispery dream to lush, dance-fueled, choral bliss.
Digging Deeper: This is synth-pop that whets the appetite for more. It’s too bad this EP doesn’t contain at least five tracks, because it feels like listeners get shortchanged and aching for more after experiencing the dynamic brilliance of that closing track.
Perfect For: Fans of Grimes, Enya, Girl in Red, Eurythmics. – John Sinkevics
Website: https://lainerex.bandcamp.com/
Listen: “For A While Now” 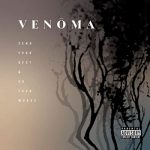 Venoma
“Send Your Best & Do Your Worst”

What Stands Out: The second full-length release from Venoma, an experimental, genre-mashing group based out of Holland, centers around the main songwriter, Cody VanSlyke, whose compositions are volatile, chaotic and complex. The album features dark, heavy lyrics that can be hit or miss. But the track, “All The White Tulips,” condemns the government at large, hitting the nail squarely on the head. Additionally, the album benefits from high-quality mixing and mastering; recorded in Grand Rapids at River City Studios.
Digging Deeper: There’s no denying that Venoma spotlights talented musicians: Cody VanSlyke (guitar, bass, piano, mandolin, synth), Evan Follmar (drums), Josh Wesley (synths), David Lee (viola) and Ana Weaver (accordion). But as a whole, there’s a lack of cohesiveness, with the flow from one song to the next feeling disjointed at times. For example, the opening track’s metal-heavy, prog-style overture gets followed immediately by a Midwestern take on flamenco. A couple of songs after “La Novia Fiel,” there’s smooth jazz, and the album closer is a heavy, dark rap track.
Perfect For: Those raging against the system and listeners who get off from the chaos of listening to their music on shuffle. – Tyler Gargala
Website: https://soundcloud.com/venoma-1/sets/a-dress-rehearsal-for-havoc
Listen: “All the White Tulips” 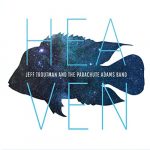 What Stands Out: Residing just outside of Hudsonville, musician and avid angler Jeff Troutman’s “Heaven” is an ode to Michigan’s natural beauty. In an interview with Local Spins, Troutman opened up about his therapeutic relationship with fly fishing, and the EP is a testament to that. His approach is delicate, with little nods to local flies and favorite fishing spots creating a tone that’s wholesome, fresh and comforting. The support from the Parachute Adams Band seems to only complement that aesthetic, with a campfire-guitar noodling, subtle supporting percussion and inspiring piano that ramps at just the right time. “Heaven” has its exciting moments, but feels like it’s out there to enjoy the trip rather than the thrill of the catch — and it captures that sentiment perfectly.
Digging Deeper: “Heaven” is charming in more ways than one, and on the bubbly end, “Ten Foot Pole,” takes the generally laid-back tone of the EP and plays with it. Between mandolin riffs from Kris Rewa and a reliable, casual backdrop from Kevin Allen on drums and Troy Stansberry on bass, it feels like Troutman has a blank canvas to fiddle with. He sings about tossing fussy fishermen into the water, sharing beers and returning to the fishing hole with his fly rod as a tried-and-true stress reliever. On the front end of the EP, however, the EP’s titular track is the strong, silent type, with swelling piano to support personal lyricism from Troutman. It’s inviting and accessible, with a lot of that credit going to how genuine Troutman’s vocal performance feels. His authentic approach to this track opens up a sound that listeners absolutely need more of.
Perfect For: A silent trip to the pond at the crack of dawn. – Nick Moran
Website: https://jefftroutman.us/
Listen: “Ten Foot Pole”