Long-time host thrilled to front a new Grand Rapids venture on Thursday as he celebrates 20th year of the ‘Acoustic Café’ showcase. Local Spins delves beyond the familiar voice. 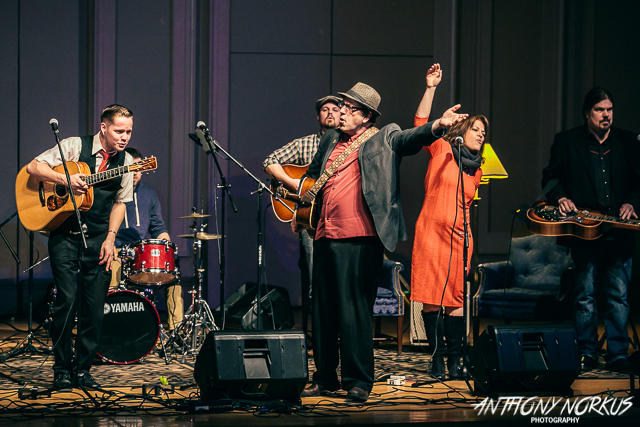 Rob Reinhart expects it to be a “fun night of discovery.” 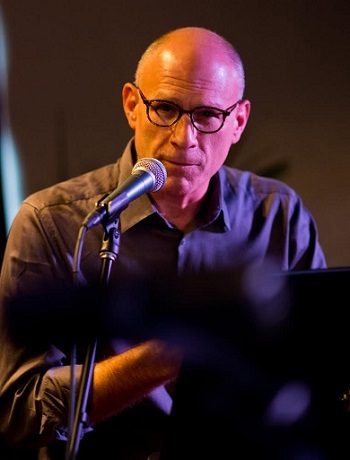 “This is sort of an extension of the outgrowth of ‘Acoustic Café,’ ” Reinhart told Local Spins, noting he’s been taking the program on the road for live concerts and interviews the past year or so. The show airs in Grand Rapids at 9 a.m. Fridays on WYCE-FM (88.1), and weekly on nearly 100 radio stations plus Voice of America worldwide.

Indeed, for this familiar voice and interviewer, “Acoustic Café” has been nothing but a compelling endeavor of musical discovery since he started the program in “a roundabout way” on five radio stations back in 1995.

A ‘GREAT IDEA’ COMING TO FRUITION 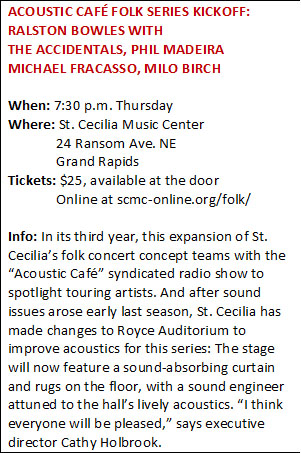 And he’s excited about spotlighting – and interviewing – other superlative acts on location in Grand Rapids as part of the “Acoustic Café” concert series, after St. Cecilia Music Center executive director Cathy Holbrook contacted him earlier this year with the idea.

“You never know who’s listening. She called me one day out of the blue,” he recalled. “We talked it through most of the summer and I said, ‘That sounds great. What a great idea.’ ”

So far, two concerts have been announced for the series – Bowles on Thursday and Justin Townes Earle on Dec. 11. Two more might get scheduled in March and May, with Reinhart hinting that the acts to come are “pretty exciting” for Michigan audiences.

If possible, Reinhart will interview artists in front of the audience for the show tapings, though that hasn’t been worked out for every concert. He said he might interview Earle for the radio show prior to his performance in December.

“The plan is I’m going to come out with Ralston and we’re going to talk about what’s going to be happening over the course of the evening,” Reinhart said. “In the course of that discussion, he will play a couple of songs. … This is really fun to hear the artists talk about their work and it sort of adds another dimension.”

INSPIRED BY THE INDIGO GIRLS

In January, Reinhart will celebrate the 20th anniversary of adding “another dimension” for “Acoustic Café” radio audiences.

And credit folk-rock’s Indigo Girls for inspiring him to create the program in the first place.

Working in commercial rock radio in Ann Arbor in 1990, Reinhart happened to attend a jam-packed Indigo Girls concert at Hill Auditorium and was impressed by the enthusiasm of fans for a band that wasn’t even getting played on the radio. 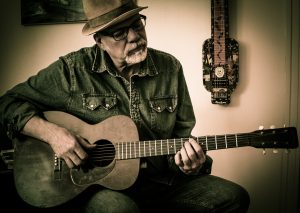 “I said, ‘I think we’re missing something, this whole acoustic music thing, ’ ” he recalled. “We were missing all these people that are songwriters. I said, ‘Let me have a show on Sundays.’ ”

That “Sunday Morning Unplugged” show eventually convinced him to launch his own syndicated version, “Acoustic Café,” which has continued to grow over the past two decades.

Reinhart, who has two sons, 18 and 13, also has a radio show on Detroit’s WDET which is “more into Michigan artists and Detroit artists.”

But he’s never heard The Accidentals or Birch, and said he’s looking forward to exploring some new artists with the audience as part of the St. Cecilia series kickoff.

“In this day and age, there is kind of a lack of information that comes with the music,” Reinhart said. “People are coming to these performances with little information. They may like the artist or a song they hear on the radio, but they don’t know anything about the acts. They’re really open to hearing what this person is all about.”