In their heyday, Joey Dornbos and Brent French generated a national buzz, recorded with an iconic producer and moved to California. One still rocks, the other does not. The latest in a Local Spins series. A Fun Ride While It Lasted: Joey Dornbos and drummer Brent French of Bangups at Founders Brewing. (Photo/Anthony Norkus)

EDITOR’S NOTE: In 2022, Local Spins is publishing occasional stories exploring the whereabouts of West Michigan bands which once reveled in the limelight but disappeared from the scene. Today, we track down the guys from Bangups. (Scroll down for videos and check out previous stories in the series here.)

When West Michigan fans last caught wind of Bangups round about 2016, the hyper-energetic garage-rock duo had just released a much-buzzed-about new album recorded with legendary engineer Steve Albini in his Chicago studio.

“We’re the most proud of this of all the stuff we’ve ever done,” guitarist and singer Joey Dornbos told Local Spins at the time, referring to the catchy and ferocious tracks that he and drummer Brent French cranked out for “Candy Cigarette.”

Indeed, a track from that album, “Va Va Voom,” racked up more than 1.1 million listens on Spotify.

And this came after a wild 2013 video for “Ego Wrecking Ball,” filmed in a Grand Rapids warehouse, enjoyed a national debut thanks to the Vans Warped Tour. (Scroll down to watch that video below.) Hailing from Howard City and Pierson, north of Grand Rapids, the fast-rising duo with a new booking agent even started performing as a foursome, adding a guitarist and bassist for a late 2015 headlining show at Founders Brewing Co.

But after moving to California soon after, the band played its final show for a friend’s birthday party in Joshua Tree, Calif., in 2018.

“Bangups never technically called it quits, but I personally couldn’t continue with the mindset I had,” said French, a senior designer for Pepsico, who moved to Los Angeles in 2017 while going through a divorce and because he “couldn’t do another Midwest winter.”

“It was good for me to set music down for awhile as it became dull and monotonous trying to do the same thing year after year. Setting music down was one of the best things for myself, as I didn’t even know what ‘success’ meant anymore.”

FOND MEMORIES AND A NEW PROJECT FOR DORNBOS: CUSS FACE

Dornbos, meanwhile, has launched another band project called Cuss Face in Los Angeles where he lives with his wife, Lisa.

“Cuss Face has 10 new songs I’ll be releasing over the next year or two,” he told Local Spins. “I turned 40 last October and I’m working with an investment bank/entrepreneur, researching and working the music business.”

Cuss Face released two singles in 2020, “I Can Kaboom,” with the familiar aggressive rock flavor of Bangups, and “Lonesome Town,” a fetching retro ballad. (Scroll down to listen to the tracks.)

For Dornbos, who’s often interjected humor into his lyrics and approach, the excitement amid Bangups’ rock ’n’ roll heyday remains fresh in his mind. 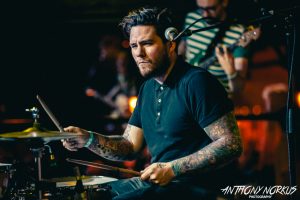 “My fondest memory of Bangups is being on Warped Tour and driving through the night in a boiling hot van from show to show with almost zero sleep. It was a wild, sweaty mess of a fun experience.”

But for French, that excitement didn’t last.

“My fondest memories are of when music still really meant something to me. As you grow out of your 20s, the friends that are still playing music tend to grow more bitter and isolated as the years go on,” he explained.

“I had a lot of fun with Bangups, but most of what we did was just pure delusion and I always had this white-knuckled grip on it. Music hasn’t been fun for me in decades.”

He apologized “if any of this feels doom and gloom, but I assure you, it’s just the opposite. Once I laid down my ‘dream’ of music, my life started opening up and I’ve never been happier.”