It’s only apropos that on a holiday of sorts, Local Spins would revisit its 2021 4/20 Playlist created through a New Standard/Agri-Med contest asking for readers’ favorite cannabis-inspired tunes. It’s smokin’ hot. 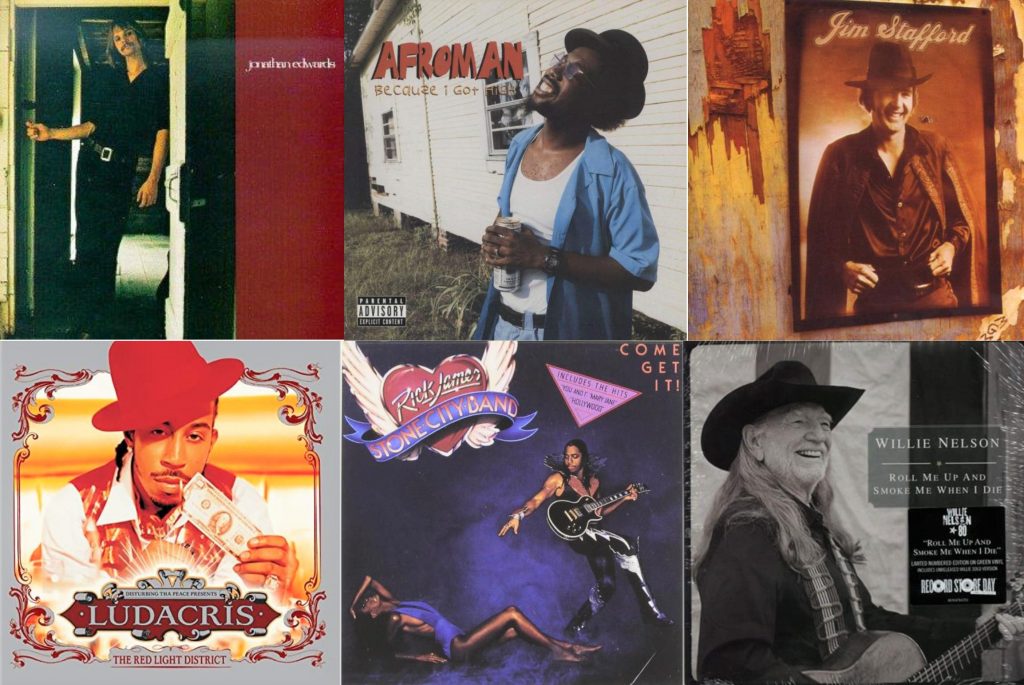 The Top 6: Album covers from the ‘Marijuana Melodies’ playlist.

It’s 4/20 yet again, so what could be better than a 20+4 playlist of cannabis-inspired tunes?

Today, Local Spins revisits an extra-special playlist that was the culmination of a month-long “Marijuana Melodies” contest co-sponsored by West Michigan’s Agri-Med (now New Standard), which operates medical and recreational provisionaries in Michigan.

Last spring, we asked readers and patrons to submit their favorite marijuana-flavored songs, and they responded passionately and in droves. More than 110 different songs in every imaginable genre – rock to hip hop to reggae to metal to folk to country — were nominated, from the obscure to the ubiquitous.

After tallying all of the entries, one clear winner emerged as West Michigan’s most popular ‘Marijuana Melody’: Jonathan Edwards’ “Shanty,” from his self-titled 1971 debut album.

Of course, that particular ditty has a rich history in the Grand Rapids area. It’s often referred to as “The Friday Song” because that’s the day of the week that radio station WLAV-FM (96.9) aired the classic, time-to-party track for more than three decades. 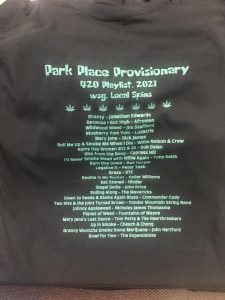 But it’s certainly not the only treasured, smoke-’em-if-you-got-’em tune embraced by the region’s music lovers. Tracks by Afroman, Jim Stafford, Ludacris, Rick James, Willie Nelson, Bob Dylan, Cypress Hill, Toby Keith and Ben Harper all ended up in the Top 10.

In honor of 4/20, we’ve included the Top 20 + 4 tracks on today’s playlist, as determined by our completely unscientific but absolutely groovy poll.

As a bonus, we’ve also included a video from West Michigan guitarist and cannabis advocate Tom Wall, who has created headlines for his groundbreaking work in “making music with plants.” In this particular track of “florganoleptic music,” Wall connected electrodes to the roots and leaves of a cannabis plant to turn the plant’s impulses into notes and sounds. He accompanies the plant on guitar for his “Cosmic Splooge.” (By the way, as part of a 4/20 celebration today (4/20/22), Wall will perform with plants at Purple East, 2221 Plainfield Ave. NE, from 3-5 p.m.)

Now, let’s light up that 4/20 Playlist again, along with comments about the songs from readers. Scroll down to listen to the full playlist on Spotify.

THE 4/20 PLAYLIST AT LOCAL SPINS

1. “Shanty,” Jonathan Edwards (1971) – It’s an enduring classic with the memorable refrain: “We gonna lay around the shanty, mama, and put a good buzz on.” It certainly resonates with West Michiganders. “I love it because I love to sit around and put a good buzz on, just like it says in the song,” wrote Tish Arthur from Muskegon. Added Patty O’Brien of Grand Rapids: “You can’t beat ‘Shanty.’ It used to be ‘Friday Song’ on WLAV and back in the day, getting out of (high school) on Friday and lighting up was a small bit of heaven.” Greg Lewis of Kentwood noted that “it signaled the work week was almost over and we would be partying soon.”

3. “Wildwood Weed,” Jim Stafford (1974) – This amusing hit single from the 1970s still tickles listeners such as Terri Bogner of Carr: “I like this song because it was written many years ago when smoking pot was done in the shadows. The lyrics of ‘Wildwood Weed’ are funny.” “Laughed every time I heard it,” noted Michael Rabach.
VIDEO: https://www.youtube.com/watch?v=qUc3X0-nMhw

4. “Blueberry Yum Yum,” Ludacris (2004) – “I grew up listening to this song, smoking down, having a hell of a time as a young adult and very late teen years. I absolutely just love the song; it makes me wanna roll one and get fried.” So wrote Randi Helmcke of Nunica and nothing else needs be said.
VIDEO: https://www.youtube.com/watch?v=dR9GRK9vrlU

5. “Mary Jane,” Rick James (1978) – Shelby Farmer of Allendale loves that this song “sounds like an ode to a lover in his life, but alas, it’s about the love marijuana gives him and us all. Extremely underrated stoner song.” Danny O’Neill of Muskegon calls it “the absolute best” 4/20 tune. “It’s an instant audible high and makes you move.”
VIDEO: https://www.youtube.com/watch?v=-1LGBg9ysd4

6. “Roll Me Up and Smoke Me When I Die,” Willie Nelson (2012) – Country singer Willie Nelson stands out as one of music’s most famous marijuana mavens. And this particular track was officially released on 4/20/12 in honor of the holiday. And it features vocals from Snoop Dogg, Kris Kristofferson and Jamey Johnson.
VIDEO: https://www.youtube.com/watch?v=kn-AB78kvvE

7. “Rainy Day Women #12 & 35,” Bob Dylan (1966) – So technically, this Dylan gem refers to being stoned for committing a sin or transgression of some kind, but the overall vibe of the track has led many to celebrate its
VIDEO: https://www.youtube.com/watch?v=fm-po_FUmvM

8. “Hits from the Bong,” Cypress Hill (1993) – So this track appears on pioneering hip hop group Cypress Hill’s massively popular sophomore album, “Black Sunday,” which made them the first hip hop group to have two albums in Billboard’s Top 10 at the same time. The band’s advocacy of recreational and medical use of marijuana was displayed in the album’s liner notes which featured facts about the history and benefit of cannabis.
VIDEO: https://www.youtube.com/watch?v=-1LGBg9ysd4

9. “I’ll Never Smoke Weed with Willie Again,” Toby Keith (2011) – Humor finds its way into the lion’s share of weed anthems and this one is no exception. “It’s a good-natured look at the downside of over-indulging on the weed,” suggested Jim Harger of Grand Rapids.
VIDEO: https://www.youtube.com/watch?v=5OJWw07oPAE 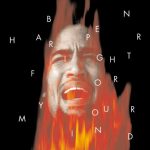 10. “Burn One Down,” Ben Harper (1995) – I still remember Calvin (then-College) being a little concerned about this song in particular when Ben Harper performed at its fine arts center many years ago. But as Phil Simpson of Lake Ann points out via Harper’s lyrics: “Before you knock it, try it first — and you will see it is a blessing and not a curse.”
VIDEO: https://www.youtube.com/watch?v=7nXH_6o-X7U

11. “Legalize It,” Peter Tosh (1976) – No cannabis playlist would be complete without this one. The title track from reggae icon Peter Tosh’s solo debut album “was the marching tune for legalizing weed across the world for a long time, hence my love of the song,” wrote Chuck Hyde of Spring Lake.
VIDEO: https://www.youtube.com/watch?v=j6QkVTx2d88

12. “Grass,” XTC (1986) – Jeff Martin of Grand Rapids calls this “a beautiful, pastoral melody” which isn’t actually about marijuana. Still, it’s frequently mistaken as a cannabis tune. To each his or her own.
VIDEO: https://www.youtube.com/watch?v=nyvgFFAzwzA

13. “Doobie in My Pocket,” Keller Williams (2009) – Unlike the “Grass” song above, there’s no mistaking the subject matter of this comical tale.
VIDEO: https://www.youtube.com/watch?v=qqYCraSGVBw

14. “Get Stoned,” Hinder (2005) – “I love the gritty combination of the raspy voice, the force of emotion-laced, passionate lyrics and the beat of a good buzz,” noted Vickie Bromley of Muskegon.
VIDEO: https://www.youtube.com/watch?v=VYIxUM-CnSw

15. “Illegal Smile,” John Prine (1971) – The late and legendary John Prine was quoted as saying that this song was not about smoking pot, but he also appreciated that it had become a marijuana anthem for many.
VIDEO: https://www.youtube.com/watch?v=MmjnQjRvPUQ

16. “Rolling Along,” The Mavericks (2017) – One of the newest songs on this playlist has quickly cultivated an enthusiastic audience. Roberta King calls it “a retro-sounding song with fun, easy-to-appreciate lyrics. I love this band, with its Latin influence and cool instruments, like a blazing accordionist.”
VIDEO: https://www.youtube.com/watch?v=w3P08UEUsUM

17. “Seeds and Stems (Again),” Commander Cody & His Lost Planet Airmen (1971) – The plight of being “down to seeds and stems again” brings about the blues for many. “I still choke up when his dog dies, but it just gets worse,” wrote fan Frank Tobin of Grand Haven. “Thank you, Michigan’s Bill Kirchen (the band’s lead guitarist)!”
VIDEO: https://www.youtube.com/watch?v=vGsq1K7f_yc

18. “Two Hits and the Joint Turned Brown,” Yonder Mountain String Band (2002) – With 4.2 million plays on Spotify, it shouldn’t be a surprise that this track by Yonder Mountain String Band would get attention. Written by John Hartford (who shows up with another song on this playlist below) for a 1992 Dillard Hartford Dillard album, Yonder Mountain’s rendition got the thumb’s up from Robert Besson of Saranac: “Jeff Austin captures the energy of real dank weed and transforms it into a celebratory song about pot.”
VIDEO: https://www.youtube.com/watch?v=Y8l4lQmNMS0 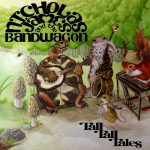 19. “Johnny Appleweed,” Nicholas James & The Bandwagon (2016) – Impressive that a West Michigan artist would find his way into the Top 20 of this ultimate playlist. Grand Rapids singer-songwriter Nicholas James Thomasma’s musical yarn about Johnny Appleweed has regaled fans since he released the track on his band’s 2016 album, “Tall, Tall Tales.” Wrote John “J.R.” Robinson of Caledonia: “Nick has long been a supporter of legalization and this fun song tells a great story.”
VIDEO: https://www.youtube.com/watch?v=g7H0MRO4EoA

20. “Planet of Weed,” Fountains of Wayne (2006) – All the elements are here: Doritos, a couch, no hatred, no greed, pleasantness and, yes, “life is better on the planet of weed.”
VIDEO: https://www.youtube.com/watch?v=7ipX4XtxDpI

21. “Mary Jane’s Last Dance,” Tom Petty & The Heartbreakers (1993) – In the category of a song can mean whatever you want it to mean comes this memorable entry from Tom Petty. In the final analysis, “nothing like cranking up some Petty music to make your day better,” insisted fan Amanda Baker.
VIDEO: https://www.youtube.com/watch?v=aowSGxim_O8

22. “Up In Smoke,” Cheech & Chong (1977) – What would 4/20 be without Cheech & Chong? The comic duo produced “the quintessential stoner comedies most of us grew up on,” suggested J. Samuel Powers of Greenville. “I have many fond memories of friends and family smoking to ‘Up in Smoke.’ ”
VIDEO: https://www.youtube.com/watch?v=RUWD-FflZPI

23. “Granny Wontcha Smoke Some Marijuana,” John Hartford (1975) – This track from folk hero John Hartford’s “Nobody Knows What You Do” gets the nod from “Farmer John” Crissman, owner of Shagbark Farm and founder of Cowpie Music Festival. “It was catchy, hilarious and since I was just a kid, it was somewhat risque,” he recalled. “My brothers and I got a big kick out of getting baked and listening to that album>”
VIDEO: https://www.youtube.com/watch?v=mufbOqlRjmA

24. “Bowl for Two,” The Expendables (2004) – “I mean all you have to do is listen to the song. I don’t think I need to explain why it’s a favorite,” Chloe of Grand Haven wrote of our final entry in the playlist. “Melodically addictive, this light and smoky tune will have you singing along in between puffs as you pass it to your friend, or daydreaming of hazier times when not lighting up.”
VIDEO: https://www.youtube.com/watch?v=f5kGUqEBva4

THE 4/20 PLAYLIST ON SPOTIFY