With a new album coming soon, Grand Rapids’ own Ultraviolet Hippopotamus will light up Ah-Nab-Awen Park on the Grand River in downtown Grand Rapids Thursday, just before the Amway Fourth of July Family Fireworks. 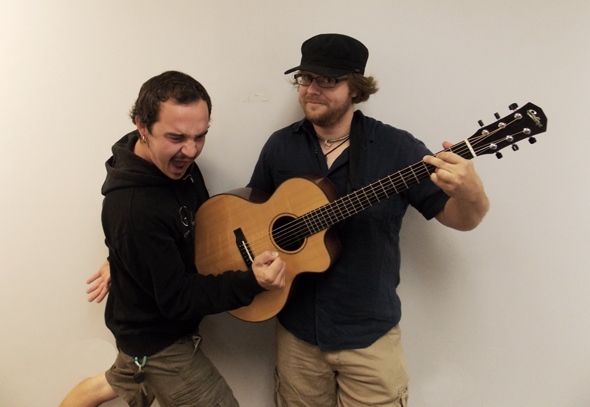 Every successful band has that moment when its members realize they’ve got something worth pursuing, something more than worth the investment of blood, sweat, tears and passion.

For Ultraviolet Hippopotamus, that moment came several years ago when the group with humble beginnings as a mere “college band” at Ferris State University in Big Rapids realized that its fans wanted more.

Four studio recordings and more than 1,000 performances later, the Grand Rapids-based jam band with an eclectic rock groove has become a national touring force, sharing stages with the likes of Trey Anastasio, Umphrey’s McGee, Primus and more at major festivals while cultivating a broad-ranging U.S. audience for its instrumentally adroit, lively shows. 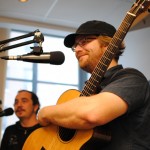 Lovingly nicknamed UV Hippo, the band’s vibrant West Michigan fan base is liable to be out in force on Thursday when the group headlines the free Fourth of July celebration show in Ah-Nab-Awen Park in front of the Gerald R. Ford Presidential Museum prior to the fireworks blitz in downtown Grand Rapids. (The show starts at 6 p.m., with Kris Hitchcock & Small Town Son, Blue Molly and Three’s a Crowd also performing.)

For a mini-preview of this first-ever Independence Day appearance by UV Hippo, Samuels and guitarist Russell James stopped by the studios of News Talk 1340 AM (WJRW) this week for my Local Spins Live show to discuss their music and perform an acoustic duo rendition of “Songs for the Reaper” on-air.

(Listen to a podcast of the show here and watch a video their performance below.)

Needless to say, band members – Samuels, James, drummer Joe Phillion, keyboard player Dave Sanders and percussionist-singer Casey Butts – are pumped up about playing a homecoming show for an audience of 20,000 or more, especially because so many of the 200 shows the band plays every year are “away from the fan base here in West Michigan.” 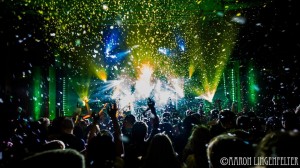 Thursday’s show comes just a couple weeks before UV Hippo hits the road for the mammoth All Good Festival in Ohio, where the band will performing alongside national stars such as Primus, Further (with The Grateful Dead’s Phil Lesh and Bob Weir), Pretty Lights, John Butler Trio, STS9, Yonder Mountain String Band, Grace Potter & The Nocturnals and more. (The band also plays the Taste of Kalamazoo on July 26.)

These sorts of high-profile gigs have become common these days for a much-traveled band that weaves prog-rock, bluegrass, jazz, reggae, electronica and funk into its mercurial music, a mix first displayed in its 2006 studio recording, “Background Music.”

“I would just say rock ’n’ roll,” Samuels offers. “It is hard to describe because we do all these styles. Really, when you come to see us, it’s a rock show. It’s just a fun, energetic experience so that’s why I just call it rock ’n’ roll.”

That melting pot of rock will heat up in a new way this fall, when the band releases its fifth studio album – and fourth full-length recording – which has been in process for several months at Grand Haven’s Redwall North Studios and Grand Rapids’ River City Studios, with big assists from engineers Bill Chrysler and Roy Wallace. Expect some wondrous new sounds when the as-yet-untitled album hits the street in early October.

“This one has been so much fun to work on,” James says. “It’s been a completely different type of experience than we’ve had in the studio before. This experience has been something completely new for us, to be much more free about everything. It’s allowed us to be more creative than we’ve ever been before.”

For more about the band and links to purchasing its music, visit its official website. 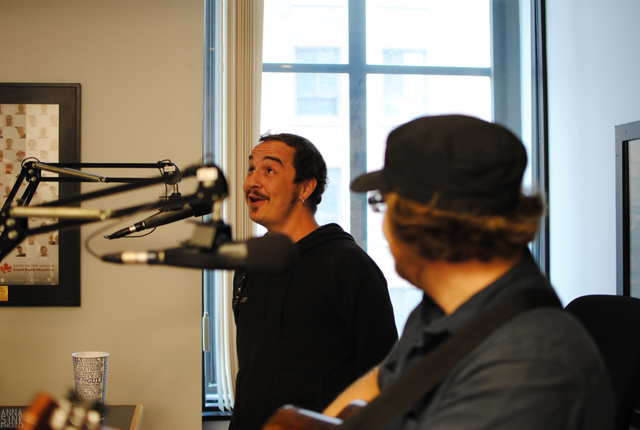