EDITOR’S NOTE: For its weekly guest playlists, Local Spins has focusing on songs submitted by representatives of West Michigan concert venues which have been silenced by COVID. Today, Quinn Mathews, general manager and talent buyer for Grand Rapids’ Listening Room — which just opened last fall — rounds up a Top 10 list of tracks by some of his favorite performers at the venue thus far.

We shut the lights off and locked up Listening Room on March 13 and here we are six months later with it still dark and quiet. 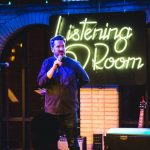 We’ve been fortunate to use our outdoor space here at Studio Park to produce some “Listening Lawn” concerts throughout the summer and here into the fall.

But we know that Michigan winter is coming soon. We’ll do what we can to survive, hopefully bringing music to you however we can via streaming or limited capacity concerts and look forward to the day when we all can enjoy live music all together again.

Please remember your favorite venues that bring you joy when we get on the other side of this. Evenings when you feel like staying at home, watching TV and relaxing, buy a concert ticket instead and take some friends out. Let’s come out of this even stronger than we went in. – Quinn Mathews

3. The Bad Plus, “Boffadem” – It was so great to see folks coming in wanting to sit on the drums side, bass side, or piano side. You don’t know who to watch when this trio performs. Absolutely incredible.

4. Fatoumata Diawara, “Nterini” – Her U.S. tour included just a handful of dates in major cities so it was an absolute honor to host this international multi-Grammy Award-nominated singer-songwriter here in Grand Rapids for two shows back in February.

5. Ladysmith Black Mambazo, “Homeless” – We were obviously really looking forward to hosting this incredible a cappella group and it was pretty fitting that theirs were the last notes performed in Listening Room before our shutdown on March 13.

6. The Verve Pipe, “If I Could Make You Feel” – These hometown heroes sold out three straight nights over Thanksgiving weekend.

7. Elizabeth Cook, “Sometimes it Takes Balls to be a Woman” – Those that were in attendance this night back in December were treated to some amazing stories from a country music legend.

8. Amythyst Kiah, “Darlin’ Corey” – Those that knew the name Amythyst Kiah bought up tickets to witness what she brought to Grand Rapids on her first performance here in our city. Those that don’t know the name soon will.

9. Marcy Playground, “Wave Motion Gun” – These ’90s rock favorites played an early acoustic show and a late rock show, of which many hardcore fans stayed for both. At 9:01 p.m. when they hit the stage for the later show their first words in the mic were “Stand up; rock shows are for standing” and that we did for the next two hours of straight rock ‘n’ f’ng roll.

10. Waldo, “Inner Killer” – Grand Rapids’ Lady Ace Boogie put together a bill for our first of many planned hip hop shows inside Listening Room. The night was beautiful, featuring several acts and headlined by this amazing artist originally from Grand Rapids, now residing on the West Coast.