Our countdown of 2018’s most-read stories continues with this October review of the superstar rock band’s early-tour show at Van Andel Arena with a controversial new lineup. 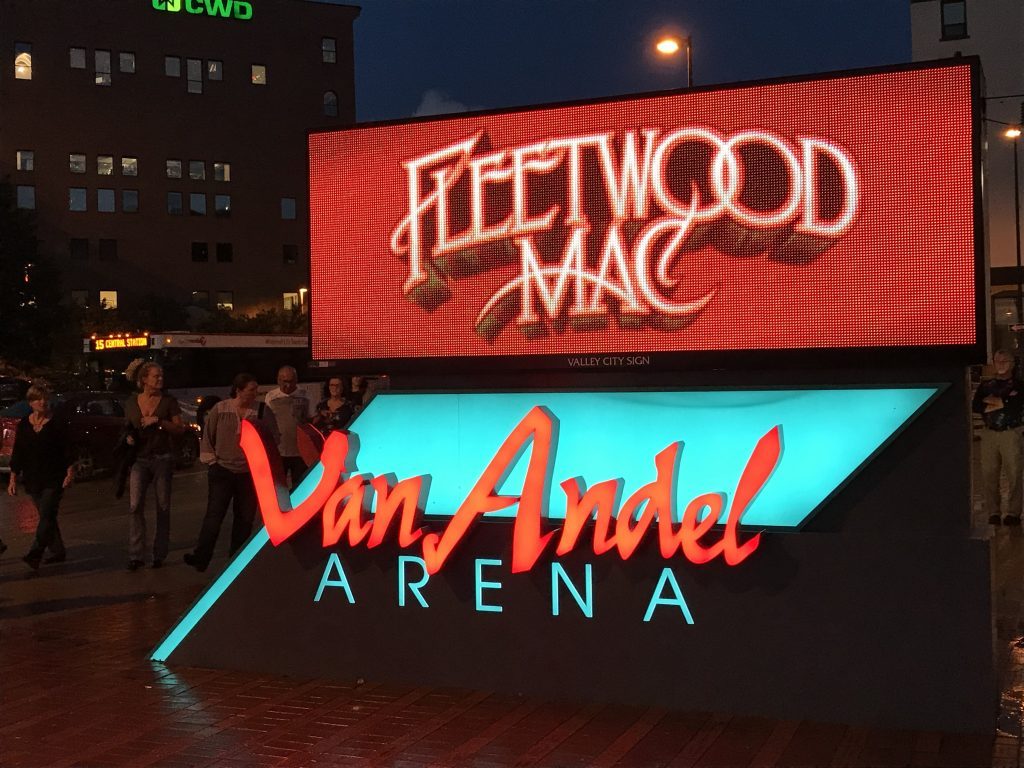 Sign of the Times: Fleetwood Mac rolled into Grand Rapids in October but didn’t allow media outlets to photograph the concert. (Photo/Local Spins)

EDITOR’S NOTE: Local Spins continues its countdown of the most-read stories of 2018 with the review of Fleetwood Mac’s Oct. 8 tour stop at Van Andel Arena. It was only the third show on the band’s tour without guitarist and singer Lindsey Buckingham (following a much-publicized falling out) so there was plenty of fan interest in just how the classic rock group would fare. Check out the Local Spins review from that October concert which drew lots of readers, even though Fleetwood Mac did not allow media outlets to photograph that night’s concert.

Anyone who’s seen Fleetwood Mac previously or followed the soap opera that the band has laid bare over the years knows that Monday night’s concert at Van Andel Arena – just the third stop on the group’s talked-about 2018 tour – was really all about Lindsey Buckingham.

And he wasn’t even there.

His much-publicized falling out with other band members over this very tour led Mick Fleetwood, John McVie, Stevie Nicks and Christine McVie to carry on without the prodigious guitarist and singer, replacing him with not one, but two, other well-known musicians: guitarist Mike Campbell from Tom Petty & The Heartbreakers and singer-guitarist Neil Finn from Crowded House/Split Enz.

Of course, that doesn’t sit well with some fans of the superstar band and even the Chicago Tribune’s recent headline blared “Fakewood Mac?” prior to the group’s show at the United Center on Saturday.

I’m not in that camp. As much as I revere Buckingham’s work, I found all of this actually made this tour more tantalizing – a must-see event.

Having reviewed Fleetwood Mac on numerous occasions (and the past few times without Christine McVie who finally came out of retirement four years ago), I viewed the selection of Campbell and Finn as brilliant. These guys are respected artists I’ve never regarded as mere sidemen – or in this case, “Second Hand News” – but rather as influential music icons of the 1970s and 1980s. Having Christine McVie back on keys and vocals was another bonus.

Plus, let’s face it, tons of classic bands are touring without key members these days, right? (See: Journey, Foreigner, The Eagles.)

Still, the burning question of the evening: How would this band fare without Buckingham? 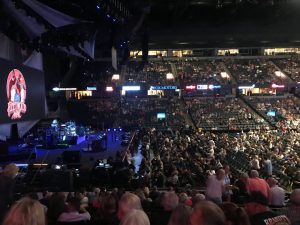 The Crowd: Van Andel Arena just before the show.

Folks, I’m here to tell you that while Buckingham’s singing and stage presence certainly were missed at certain junctures of the evening, this iteration of Fleetwood Mac did nothing to tarnish the legacy of this enduring band and actually provided an intriguing twist on its own catalog and a few others – something that wouldn’t have taken place if he was on board.

Monday’s two-and-a-half-hour show wasn’t a sellout, but the thousands of West Michigan fans who bought the pricey tickets and cheered their heroes on were treated to a set list that was far different than the one the band sported the last time it played Van Andel Arena:

• Nicks and Campbell tearing up “Free Falling” in a poignant encore tribute to Petty, complete with photos of the late rock star on the video screen behind the band;

On those classic Fleetwood Mac numbers that fans revere, Nicks sounded as crisp as ever (“Rhiannon,” “Gold Dust Woman,” “Dreams,” “Landslide”), Christine McVie provided the group’s upbeat, uplifting charm even if her vocals seemed understated at times (“Little Lies,” “You Make Loving Fun,” “Everywhere”), Fleetwood at 71 continued to provide that eccentric, wildman robustness (his solos are always smile-inducing) and John McVie was, as always, the reserved “backbone” of the band (as Fleetwood put it).

Musically, the rhythm section has barely changed an iota, and considering all the lineup changes they’ve seen over the past five decades, these two guys I’m sure appreciate and revel in the opportunity to jam with a couple of new players.

Indeed, the band threw caution to the wind from the get-go, allowing Finn to charge out of the box vocally on the first song of the night, “The Chain.” And while he doesn’t quite have Buckingham’s timbre, the singer managed his parts remarkably well throughout the night. 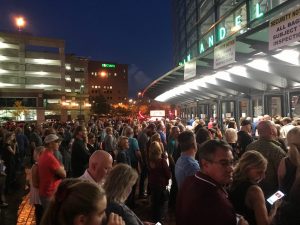 Pre-Show Lineup: Outside the arena.

Campbell, meanwhile, seemed to revel in the opportunity to crank out those trademark Buckingham leads, and also shined masterfully — and perhaps more confidently — on pre-Buckingham material like “Oh Well” and “Hypnotized.” Considering Nicks’ longtime musical relationship with Petty and the Heartbreakers, it seemed apropos that Campbell was tabbed for this tour.

To be sure, with only three concerts under their belts, this lineup – which also features another percussionist, keyboard player, guitarist and two backing singers – is still trying to find its comfort level, so some songs on Monday were stronger than others, with a few minor missteps vocally. And the band stuck with the script, playing essentially the same set list unfurled in Chicago.

But it’s also unfair to paint this as somehow inauthentic. Instead, it was refreshingly different at times, often intriguing, powerfully entertaining and filled with the sort of fuzzy nostalgia that fans crave.

“Thank you for being with us on this journey, and it is the beginning,” Nicks told the crowd early on, referring to the North American tour that runs through early April.

More than 50 years after forming, some might suggest it’s actually the beginning of the end for Fleetwood Mac. If so, it was a fitting swan song for Grand Rapids fans.