Veterans Day is Wednesday, so this week’s playlist at Local Spins unfurls some classic tracks that commemorate those in the military and the sacrifices they’ve made in spite of the politics involved. 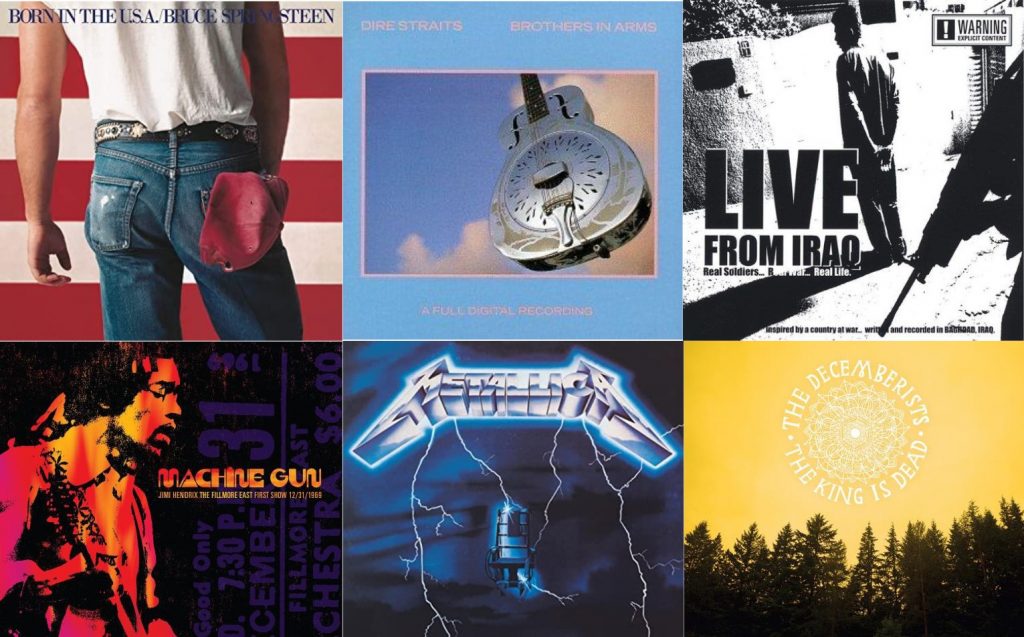 Soldiers’ Serenade: Some of the music that made the Top 10 list for Veterans Day.

Pretty much everyone knows someone who’s served in the military, fought in wars and held down the fort, so to speak.

So with Veterans Day taking place on Wednesday, Local Spins’ weekly playlist unfurls some classic tracks from the rock ‘n’ roll era that commemorate our soldiers and the ultimate sacrifices they’ve made — often in spite of the politics involved.

Just like the divergent views found across the United States, these songs reflect varied experiences of brothers and sisters in arms, expressed in the lyrics of artists who’ve astutely turned the mirror on ourselves and our heroes. There are plenty more out there to embrace; these are our Top 10 picks.

1. “Born in the U.S.A.,” Bruce Springsteen (1984) – Although it’s often been misinterpreted, Bruce Springsteen’s anthem about a returning Vietnam War veteran still resonates strongly today — and serves as a call to action for all of us to recognize and provide comfort to our returning troops. It’s also the very definition of “anthemic.”

2. “Dress Blues,” Jason Isbell (2007) – Penned about Marine Cpl. Matthew D. Conley who was killed in Iraq in 2006, Jason Isbell continues a tradition of country artists paying tribute to the nation’s military. This one is particularly poignant and later was covered by the Zac Brown Band.

3. “Brothers in Arms,” Dire Straits (1985) – There are lots of things to like about this beautifully melancholy title track, not the least of which is Mark Knopfler’s amazing guitar work. And the final lines will stick with you: Let me bid you farewell / Every man has to die / But it’s written in the starlight and every line in your palm / We are fools to make war on our brothers in arms.

4. “For Whom the Bell Tolls,” Metallica (1984) – There’s a frightening milieu hanging over this heavy metal description of battle and loss, inspired by a novel about the Spanish Civil War.

6. “8th of November,” Big & Rich (2005) – The Vietnam War-era tale of the first living black man to receive the Medal of Honor since 1898, the music video — introduced by veteran Kris Kristofferson — was nominated for a Grammy Award.

8. “Soldiers,” Drowning Pool (2007) – The refrain, “This is for the soldiers,” says it all — along with video footage of these metalheads performing for the troops.

9. “Live from Iraq,” 4TH25 (2016) – The music for this rap track was actually recorded in Iraq and the video reflects some of the frightening realities of deployment.

10. “Machine Gun,” Jimi Hendrix (1970) – This is one of those tracks that not only shows off Jimi Hendrix’s jaw-dropping virtuosity in recreating the sounds of everything from bombs to helicopters to machine guns but his brutal lyrical assessment of a soldier’s dangerous plight.

TOP 10 SONGS ABOUT SOLDIERS: The Local Spins Playlist on Spotify