Turbulent Maelstrom and More: The Tool playlist at Local Spins.

Tasked with piecing together the ultimate Tool playlist, one is tempted to wholly avoid the 13-years-in-the-making “Fear Inoculum” album, which arrived on a wave of hype in 2019, and finds the erstwhile heavy-prog-rockers snaking a little too far up their own collective ass for their own good.

So that’s exactly what I did, although 15-minuter “7empest” (oof, on multiple levels) brings the righteous heavy right away, audaciously merging pensive noodling with a riff cribbed from a swingin’ mid-’70s Ted Nugent record before the band once again finds a comfortable nest deep in the weeds. 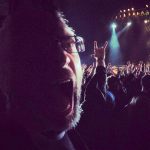 So consider that the 11th selection on this 10-track collection, little of which will be performed when Tool plays Van Andel Arena on Tuesday (a make-up date for a COVID-postponed gig originally slotted for 2020).

Expect large swaths of “Inoculum” that night, because Tool — led by one-time Grand Rapidian Maynard James Keenan — consistently shows more interest in exploring their psychedelic meandering than pleasing the filthy masses. So if you come home wowed by the high-tech brain-warp light show but disappointed in the set list, fire up this batch of tracks to stave off the hangover.

2. “Undertow” (1993) – The “clean grunge” of Tool’s first record – lots of space in the production, selective fuzz-rock distortion – rushes like black water direct to the lungs. This cut is especially suffocating in its bleakness, its brooding menace, its relentless rhythmic crush, Keenan fighting for one last gasp of air in the frothy, turbulent maelstrom. The ’90s were fun!

3. “Opiate” (1992) – A snide takedown of religion – and the follower mentality in general – this early-era Tool cut is a snarling, erect-it-and-rip-it-all-down number hinting at the blistering intensity to come on future records. The band alters it live now, stretching the arrangement to include one of its diddlefarting, near-ambient interludes, adding some far-out vibes, man, but sapping it of its roiling momentum. Stick with the direct-hit crotch-kick of the original.

4. “Flood” (1993) – Plumbed from the deepest, darkest recesses of the “Undertow” record, this is the most terrifying Tool composition, the dread in this psychologically assaultive lurker seeping into your marrow like fear. More than half the track is intro and buildup to Keenan’s panicked vocal, clambering for a metaphor and finding only crumbling ground before reaching a terrifying realization: “I was wrong,” he practically whispers. “This changes everything.” You know how cathartic that Keenan howl is in “The Grudge”? The one at this ditty’s climax is the exact opposite of that: Despairing.

5. “Schism” (2001) – The “Lateralus” album is Tool achieving an exquisite balance of technical precision, relative accessibility and conceptual focus (although I’m not wholly convinced that all the opacity, manufactured pretension and overwrought complexity adds up to much beyond Tool effing with us, throwing red herrings hither and yon as a smokescreen excuse for indulging the heroic Rush fantasies. I digress). This track is representative of the band most likely at its creative peak, fearless in its displays of vulnerability, and equally unafraid to pummel us with double-bass drum battery.

6. “The Pot” (2006)– Ever the rascal, Keenan unleashes his most beautiful falsetto to introduce this profane screed against hypocrisy. “Now you’re weepin’ shades of cozened indigo, got lemon juice in your eye,” he jabs as stormy guitars squall behind him, riffs ascending to sit on a high horse. Can’t help but admire the brazen confidence of this weirdly upbeat, seething rock.

7. “Sober” (1993) – The breakthrough hit consists of a minimalist trudge driven by a percussive bass riff with Adam Jones’ paranoid guitar squealing overtop, sparse drums (for Tool anyway), murmuring vocals and one of the squirmiest videos in MTV history. The ’90s were also STRANGE.

8. “AEnema” (1996) – This song’s original sentiment, a celebration of Los Angeles’ inevitable flushing into the abyss via a local faultline, can be somewhat cleanly adapted to the more immediate calamity of drowning-by-climate-change: “Learn to swim,” hisses Keenan, “learn to swim.” This is Literalist Tool instead of Obscurantist Tool, a bitter, bald-faced punch-in-the-nose (“f— retro anything, f— your tattoos,” the singer rants) appealing to the reactionary ape in all of us, screechy guitars ebbing and subsiding, ebbing and subsiding like angry ocean waves.

9. “Right in Two” (2006) – A contemplative nine-minuter that Tool writes too many of these days, none as potent as this sarcastic lamentation on the folly of humanity, created by a fool god and aided and abetted by a deeply flawed evolutionary process. Noodling and a nigh-pointless Danny Carey tabla solo provide respite before the track becomes righteously warped Black Sabbath drowning in bubbling tar.

10. “Lateralus” (2001) – The ultimate closer, this one’s a journey, Fibonacci’d within an inch of its time-signature calculus and winding arrangement, stopping just shy of outright indulgence, reaching for a hitting that higher plane, a level of composition that’s Tool at its most actualized. “Spiral out, keep going/Spiral out, keep going …”