Seth Glier, Griffin House, May Erlewine, Michael McDermott and other past performers at the Spring Lake listening room populate this politically charged playlist from owners Michelle and Gary Hanks. 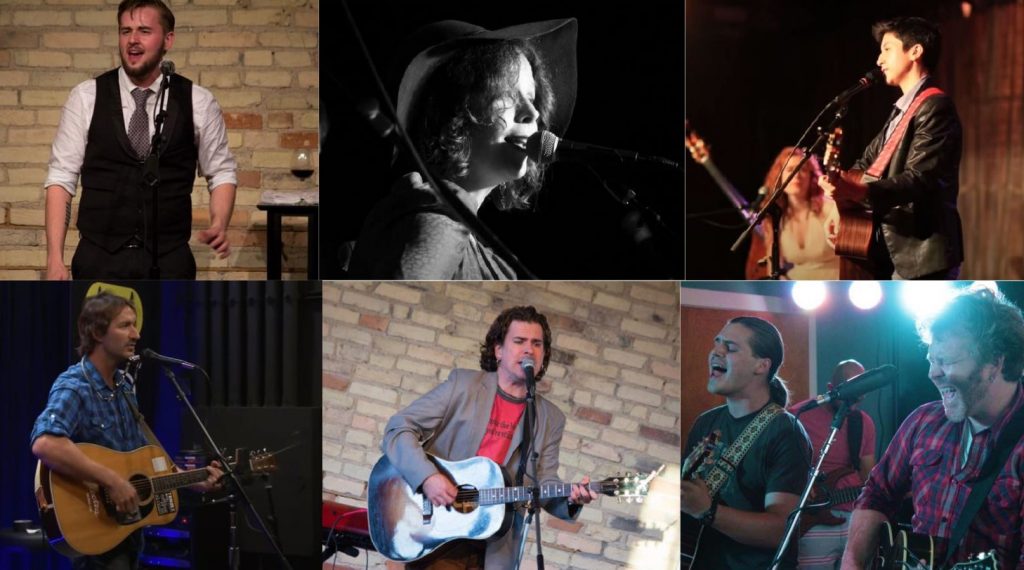 Seven Steps Up Stars: Some of the artists who’ve played the venue. (Photos/Anna Sink, Kevin Reedy)

EDITOR’S NOTE: For its weekly guest playlists, Local Spins has been focusing on songs submitted by representatives of West Michigan concert venues which have been silenced by COVID. Today, Michelle and Gary Hanks, owners of Spring Lake’s Seven Steps Up, step up with a roster of politically relevant songs by past performers at the vibrant listening room.

But within days of our nine-year anniversary, we were shut down by COVID.

Seven Steps Up struggles daily with the loss of the thing that has kept us going for nine years: live music — the kind of connection that is found nowhere else and can’t be replicated or duplicated in any way.

Live music is what it is. The sound of recorded music can help us remember what we felt during a live performance, but it cannot be replaced. You can’t download a live music experience. There’s no curbside experience. And there is no way to duplicate the energy and connection between the artist and the audience which is particularly profound in an intimate space such as our listening room. 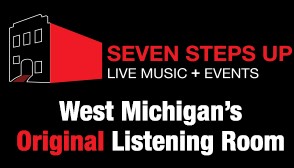 It is the pure joy of helping facilitate that connection to which we have become addicted. And so we find ourselves in the biggest struggle of our lives without the single thing that has given us the strength to survive. Ironic.

We are committed to surviving this pandemic and will persevere through the help of GoFundMe and other donations, and the amazing help that we’ve received from our community and our music community around the country. We’ve paid our bills and refunded thousands in tickets and somehow we’ve managed to survive with these unexpected donated funds. (Contribute to the “Save Seven Steps Up” GoFundMe here.)

We’ll soon have a new online store through our website with some great merchandise that can be shipped around the country or available for pickup curbside. We will resume some live-streams after the summer is over. And we will be here when the music starts again. It’s no longer an option for us.

This playlist feature past performers at Seven Steps Up. Let me paraphrase a story Seth Glier told on our stage about a conversation he had with Ani DiFranco, who told him, “You’ve written good songs, but now’s the time to write the songs that need to be sung.”

Compiling this playlist this was tougher than we thought. Many of the artists who have performed at Seven Steps Up use their voices for conversations about what’s happening in the world, and there are hundreds of songs that need to be sung that come to mind. We specifically chose songs that elicited a strong response from both of us. – Michelle and Gary Hanks

SONGS THAT NEED TO BE SUNG: Local Spins Playlist by Seven Steps Up

1. “What In The World is Happening Here,” Michael McDermott (2020) – An EXTENSIVE list of things gone awry. Although Michael hasn’t performed this song on our stage yet, we were both moved by this song when released earlier this year.

2. “That’s My Home,” May Erlewine (2020) – May’s “Second Sight” CD release here was one of the most powerful performances we’ve ever seen. May’s voice – both spoken and song – is unequaled in its passion and grace.

3. “White Noise,” Steven Page (2018) – Unapologetic Steven Page in his fist clench to white nationalists. His songs are powerful and profound. Take a listen.

4. “I Remember (It’s Happening Again),” Griffin House (2007) – A thoughtful, introspective anti-war song with an excellent accompanying video. We’ve heard the story of his grandfather many times on our stage, but it never fails to touch our hearts. Griffin’s grandfather told him that he had shot off Hitler’s mustache and carried it around in his pocket and for years Griffin thought it was true until he told the story at school and learned otherwise. Makes us smile just thinking about it.

5. “Outcry,” Muteflutes (2017) – Outrage and pain from what they’ve seen from the Trump administration. This song came out in 2017 but is even more relevant today. This one ROCKS!

7. “Cameron,” Jillette Johnson (2013) – We were transfixed with this artist after hearing this song. Incredible message about being who we are despite what the world throws at us and the bullies who would like to stop us.

9. “Simplify,” Brendon James (2013) – Right now, we love the thought of simplifying life and disconnecting. So many instances right now where we should just stop for a moment before posting or reacting.

10. “Nothing More,” The Alternate Routes (2014) – We are how we treat each other and nothing more. The lyrics are powerful and now are included in a mural on the side of the building. We felt it was a fitting way to end the playlist.

SONGS THAT NEED TO BE SUNG: Seven Steps Up Playlist on Spotify

Note: The Brendon James and Mouths of Babes tracks aren’t available on Spotify