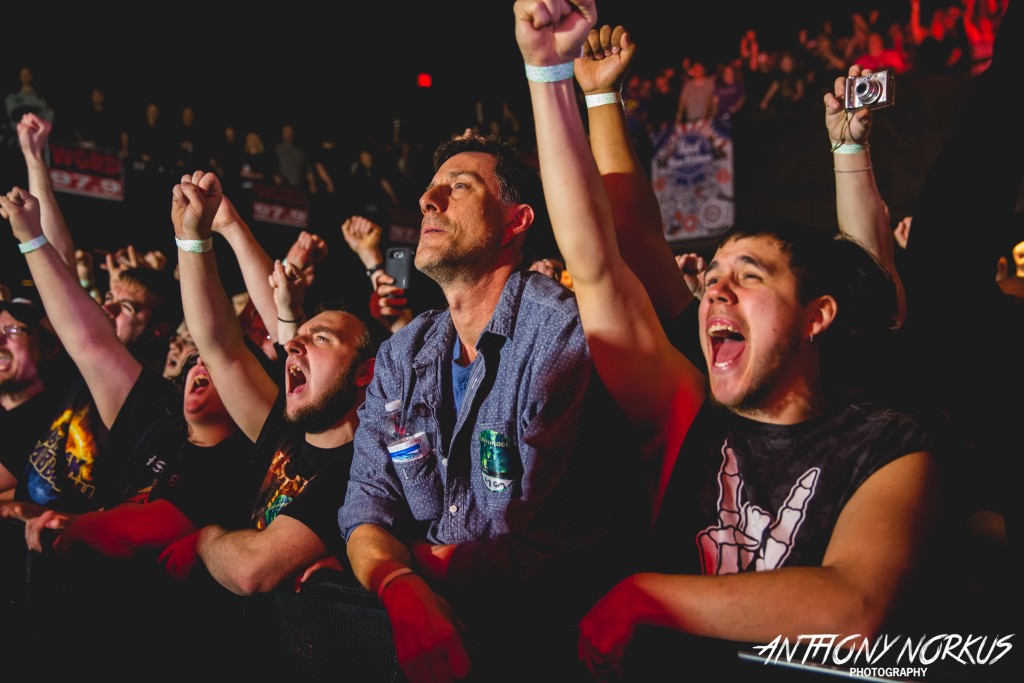 Metal Mania: Disturbed fans will be out in full force this week when the band makes a Grand Rapids tour stop. (Photo/Anthony Norkus)

To be included in our “Big List of Michigan Music Festivals” or the upcoming list of summer concert series, send an email to liz@localspins.com  with details and contact information.

Fresh off a Grammy win for Bluegrass Album of the Year, The Travelin’ McCourys are making a surprise stop in Benton Harbor, with always red-hot mandolin player Jeff Austin (formerly of Yonder Mountain String Band) in tow.

Sweeping through West Michigan as part of their “Grateful Ball Tour,” The McCourys and The Jeff Austin Band will each be performing a full set of their own music followed by one collaborative set of Grateful Dead music to close down the night. 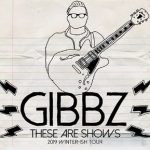 GIBBZ
When: 8 p.m. Tuesday
Tickets: $25 advance, $30 day of show
Where: The Mint inside The Intersection, Grand Rapids


New York synth-pop artist and singer-producer Mike Gibney is Gibbz, who makes a Grand Rapids stop early this week as part of a U.S. tour that’s taking him later this month to the West Coast. This intimate show in The Mint features a guy who’s racked up more than 16 million streams on Spotify and toured alongside such acts as Saint Motel, Gramatik and others. He’s touring behind his new LP, “These Are Love Songs.”

Also on the bill: Hizen and Cobrayama. Doors for this all-ages show open at 7 p.m. Details online at sectionlive.com. 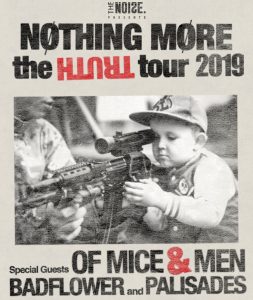 Texas quartet Nothing More brings its “The Truth Tour” to Grand Rapids, unleashing its hard rock/prog metal music that’s been showcased on five studio albums, including its most recent collection, 2017’s “The Stories We Tell Ourselves.”

Joining the band will be buzzed-about rock band Badflower, which is promoting its debut album, “OK, I’m Sick,” which has earned high praise from a variety of media outlets and will follow up their current travels with a summer tour with Shinedown. Of Mice and Men and Palisades will also perform at this all-ages show, with doors opening at 5:30 p.m. Get tickets and details online here. Also, $1 from the purchase of every ticket will be donated to mental health nonprofit To Write Love On Her Arms. 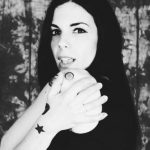 Massachusetts band Sarah Borges & the Broken Singles has navigated through the roads of rock since its inception in 2005, and there doesn’t seem to be any slowing down. Sarah Borges & the Broken Singles are road-hardened veterans, captivating listeners with musical styles that walk down a fine line between punk and country, creating a smooth natural blend of alternative country.

Also, on the bill is West Michigan’s John Merchant. Information and tickets can be found here. 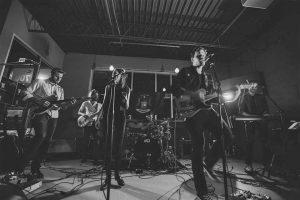 This is billed as a South By Southwest preview show featuring two Grand Rapids bands – Americana/rock’s Brother Elsey and roots rock’s Jack Droppers & The Best Intentions – who will be traveling to Austin next week to strut their stuff at the giant international music festival and conference. (Both bands play a Michigan House showcase in Texas on March 11, along with eight other acts from the Great Lakes State.)

This is an opportunity for West Michigan fans who can’t make the trip to see two bands getting a lot of buzz for their music: the rock-fueled band of brothers in Brother Elsey and the roots rocking Jack Droppers and band, which just released a couple of new singles. 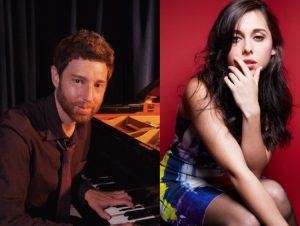 Hailed as one of the country’s top young jazz singers, the award-winning Veronica Swift will be joined at St. Cecilia Music Center by the Benny Green Trio, led by a world-renowned pianist acclaimed for his “hard-swinging, hard-bop” musicianship. 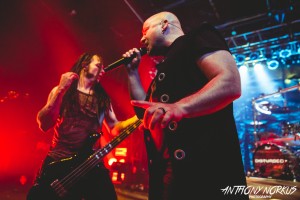 Two-time Grammy nominee Disturbed arrives in Grand Rapids midway through its “Evolution” world tour in celebration of the 2018 release of the album of the same name. The heavy metal band’s latest album has been getting lots of attention and its single, “Are You Ready,” has reached No. 1 on Billboard’s “Hot Mainstream Rock Tracks Charts” for four consecutive weeks.

Joining Disturbed on stage will be the equally buzzed-about hard rock band Three Days Grace. More information and tickets can be found here.

MONEYBAGG YO
When: 8 p.m. Thursday
Tickets: $20 advance, $25 day of show
Where: The Intersection, Grand Rapids

Demario White, aka Moneybagg Yo, stops in Grand Rapids for his “Word 4 Word” tour, celebrating his first official studio album drop: 2018’s “Reset,” which has impressed listeners with his cold flow and consistency. The underground rap artist has been working hard, releasing more than 10 mixtapes since 2016, collaborating with the likes of Quavo and Yo Gotti.

More information and tickets can be found here. 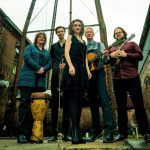 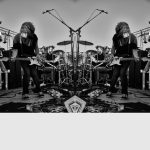 LOCAL SPINS TICKET GIVEAWAY: The first two people to email john@localspins.com with “LOCAL H” in the message field will win a pair of tickets to Saturday’s show. Check The Big List every week for your chance to win concert tickets.

Four blistering sets will shower The Stache at The Intersection with a bracing variety of rock ‘n’ roll, led by Illinois alt-rock/grunge rockers Local H, who’ve been at it for more than 25 years (and who first made a big splash with the 1996 hit, “Bound for the Floor”).

Also on the bill will be Grand Rapids favorites Valentiger and Slumlord Radio as well as Chicago alt-rock/punk/grunge band Stoop Goodnoise. Doors open at 7 p.m. Details online at sectionlive.com. 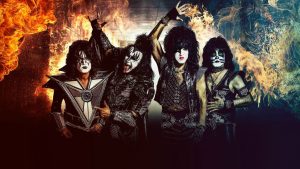 This is billed as the “End of the Road World Tour” for classic rock’s fire-breathing, blood-spitting, platform shoes-wearing and makeup-covered KISS, so expect Gene Simmons and company to “Rock and Roll All Nite” and “Shout it Out Loud” while paying tribute to “Detroit Rock City.”

Come back to Local Spins later this week for a special KISS playlist. Concert details and tickets available online at vanandelarena.com. 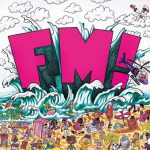 Long Beach rapper Vince Staples brings his “Smile, You’re on Camera” tour to Grand Rapids in support of his 2018 album, “FM!”. Known for his unique take on hip hop by incorporating avant-garde and electronic sounds, Staples has been making a name for himself, also being included in XXL’s 2015 “Freshman Class,” an exclusive list of hip-hop artists that are on the rise and need to be watched. 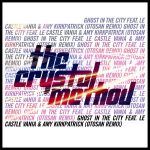 The big beat genre pioneer Scott Kirkland of The Crystal Method stops in Grand Rapids for his “The Trip Home” tour in celebration of his sixth full-length album of the same name. This will mark Kirkland’s first time as a solo act; other founding member Ken Jordan decided to retire in 2016. Kirkland’s love for the electronic music world is always present, able to create trance-inducing organic sounds that always sound fresh that hit on different emotions.

More information for this 21-and-older event can be found here. 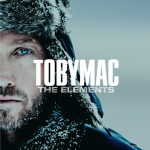 Christian singer and hip hop artist TobyMac brings its “Hits Deep Tour” to Grand Rapids along with a bevy of other big names, including Jeremy Camp, Jordan Felix, Ryan Stevenson, We Are Messengers and Aaron Cole. TobyMac (Kevin Michael McKeehan) is a multiple Grammy winner who first made a name for himself as part of DC Talk with Grand Rapids native Kevin Max Smith.

This tour is billed as a partnership with K-Love, Air1, Awakening Events and Food for the Hungry. Get tickets online here. 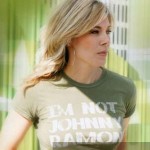 Alice Peacock playing Seven Steps Up in Spring Lake, 8 p.m. Friday, $30-$40 — This incredibly talented, nationally renowned singer-songwriter was the first artist to ever play this stellar Spring Lake listening room and Alice Peacock returns for another evening of insightful music and striking vocals. Seven Steps Up follows this on Saturday with the return of Dan Navarro. Get more information on the venue’s Facebook page and call 231-557-7687 for tickets. 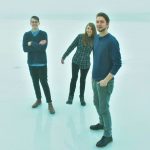 The Quirk, When Particles Collide, Bike Tuff and Amuse playing 741 on Leonard in Grand Rapids, 10 p.m. Friday, free – It’s going to be a night of rock at 741 on Leonard as this quadruple-billed show plans to tear the roof down.

That Beatles Thing playing Shots on the River on West River Drive NE in Belmont, 9 p.m. Saturday, free – Grand Rapids’ most popular Beatles tribute band sets up shop with a ton of classic hits at Shots on the River. 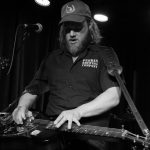 The Springtails playing Salt of the Earth at 114 E. Main St. in Fennville, 6 p.m. Sunday, $15 – The Springtails cover the gamut, from vaudeville to swing-era standards to pop and folk. Led by the Lansing husband-and-wife duo Andy and Julianna Wilson, this shapes up as a special evening.

The Expendables playing The Stache inside The Intersection in Grand Rapids, 8 p.m. Sunday, $17 advance, $20 day of show – California ska/reggae/surf rock band The Expendables bring their “Winter Blackout: The Yeti Strikes Back” tour to Grand Rapids, with Ballyhoo! and Kash’d Out also on the bill. Doors for the all-ages show open at 7 p.m. And the first person to email john@localspins.com with “EXPENDABLES” in the message field will win a pair of tickets to the show. 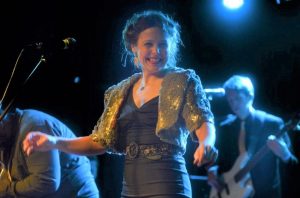 May Erlewine plays a sold-out show at Rockford Brewing on Saturday. (Photo/Katy Batdrorff) 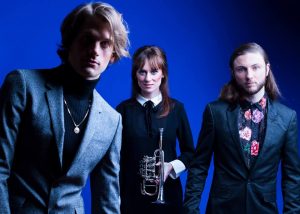