Ericka “Kyd Kane” Thompson will succeed Marcel “Fable the Poet” Price in the three-year role — the first black woman and first gay/lesbian person to hold that title. Learn more in this profile. 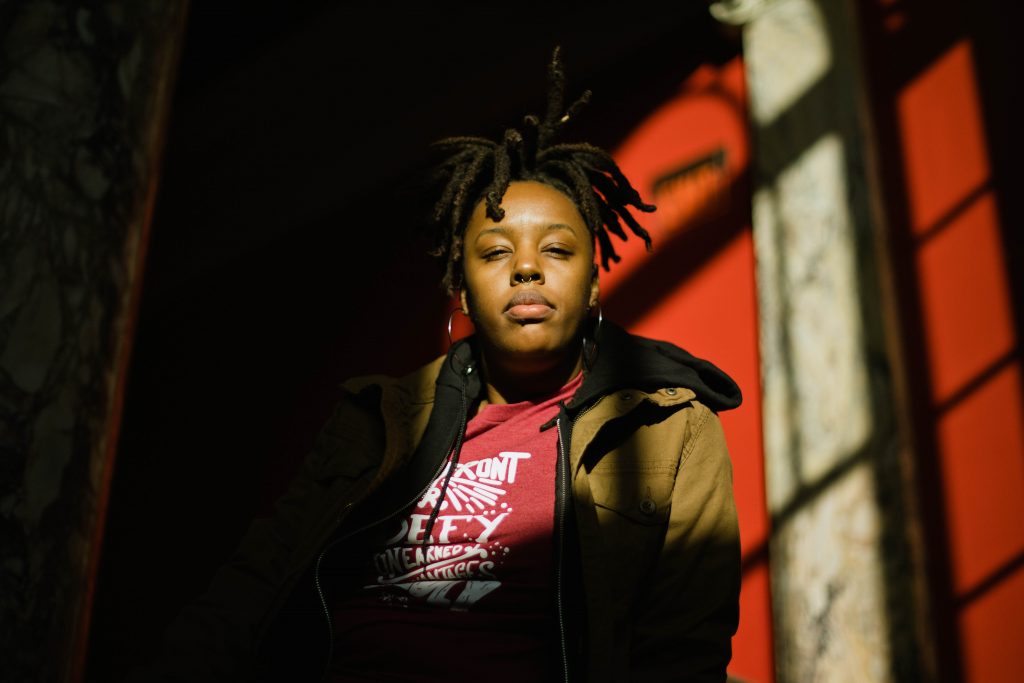 SCROLL DOWN FOR VIDEOS OF KYD KANE

Ericka “Kyd Kane” Thompson has dedicated her life to creative expression — finding a way to approach and share her feelings — but she’s a poet first and foremost.

Recently named Grand Rapids’ new poet laureate by the Grand Rapids Public Library, she will act as the city’s prophet of prose for a three-year term starting Jan. 1, 2021. She’s also the first black woman and first openly queer person to be given the honor.

“I’ve always loved arts and culture, but I haven’t always had the opportunity to experience seeing people that are a representation of my life or my life experiences,” Kyd Kane said. “So [it’s great] to be a person that can be standing there as a queer person living loud and proud of it.” 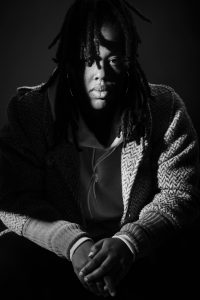 The application process for poet laureate took a month-and-a-half of preparation in February, but Kyd Kane didn’t hear back about an interview until the summer.

“Oh, I completely forgot, and I’m feeling like a crab because I’ve been in quarantine,” Kyd Kane said with a laugh. “And I can’t even imagine what it would be like, so I was like, ‘Who’s Kyd Kane?’”

Kyd Kane will succeed outgoing poet laureate Marcel “Fable the Poet” Price, the artist she helped appoint when sitting on the selection committee three years ago. Both poets are part of the Diatribe, a poetry outreach organization that uses language to help students tackle society’s largest issues.

Rather than stepping into Fable’s shoes, Kyd Kane said she intends to stand next to him, sharing her “bright, vibrant and loud” style with Grand Rapids. While reflecting on other candidates throughout the years, she’s confident that community-driven poets like Fable and Kyd Kane represent the future.

“I’m stepping next to a person who’s really ambitious and really, really hungry to push culture forward and push people [to] put artists on platforms,” she said. “I’m super excited to follow someone who was super ambitious, that continues to be ambitious, and it does nothing but make me want to reach for the sky.”

LEARNING TO OWN POETRY

The name Kyd Kane actually found Thompson while she was a growing up in Grand Rapids.

Raised in a household with a love for soap operas, her family called her Ericka Kane, a reference to Susan Lucci’s character on “All My Children” who had her sights set on love, leadership and fame.

Kyd came later, when she was rapping with a group in Grand Rapids during her late teens and early 20s. She said writing and performing as Kyd Kane gave her a chance to reclaim a childhood she never had. Helping her mother raise her three other siblings early on, she felt like an adult for longer than she had been a kid. Poetry was a chance to explore a lost sense of childish freedom. 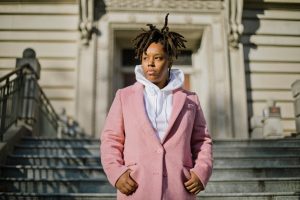 Poetry found its way into Kyd Kane’s life while she was helping raise her siblings. Long impressed by the expressive power of it, she recalls students back in second grade reciting poetry at a school picnic. She said she was taken aback by the beauty of the language and the sense of reflection it produced.

But that sense of wonder was fleeting: The adult responsibilities of earning money and paying bills turned poetry into white noise until Kyd Kane’s world came to a screeching halt due to a sudden layoff in her employment. As it turns out, getting a severance package and taking a part-time pizza delivery job was the best thing that ever happened to her.

She turned back to poetry, reciting lines and committing them to memory during pizza deliveries without a way to write them down. Her passion for poetry came flooding back with a realization that this is what she wanted to do with her life, but it took time to chisel down the close-minded culture she had experienced in the office.

“I also felt a little insecure going into the world because corporate spaces kind of put you into a box: You can’t dress the way that you want to dress, you can’t speak your mind freely,” she said.

“I think I had a little bit of PTSD about what would it be like if I went into the world and just got to speak my mind, because when I spoke my mind in these places, I would be reprimanded.”

Between delivering garlic knots and supreme pizzas, Kyd Kane would eventually pour more time into getting the lines she would speak to herself written down, eventually building up a small body of work. While there was a sense of self worth growing from it, there was also a hunger to dive deeper into the world of self expression.

She eventually traveled to Chicago where she could perform without the pressure of seeing anyone she knew. There, Kyd Kane as an artist first made her splash. She also explored Detroit, which she said was incomparable to anything else she had seen: open mics full of people jumping to share raw, powerful spoken word pieces.

It took time to shift from sharing in Chicago and Detroit to performing in Grand Rapids. After coming home, she said she would just sit at open mics and listen to the city’s poets perform at events like “Smokin’ Spoken Word”
at The Hookah Lounge.

But after releasing a spoken word video titled “Awaken,” the local poetry scene start appreciating her work. At an event in 2015, Kyd Kane performed for the first time in her hometown, reciting the poem from her “Awaken” video. That moment sparked a fire that has since only grown. (Scroll down for “Awaken” video.) 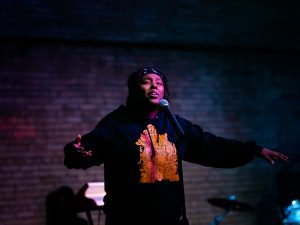 “They pulled me out of the crowd,” she said. “[They] was like, ‘We seen that video that you made. Do you want to say that here? Because someone did show up, so we’ll give you 20 bucks.’ It really just lit a fire under my butt. I haven’t stopped since then.”

Since then, she’s used poetry alongside other art forms to explore what it means to be an expressive, creative voice.

“I really tried to take an alternate route in my career as a poet,” Kyd said. “So many poets that I knew came out (and) did the book thing, they did the open mic thing, traveled around the country. … I really wanted to give a room for all of my work to breathe a little bit.”

For Kyd Kane, that meant exploring large-scale contemporary art. Working with places like the Kalamazoo Institute of the Arts and SiTE:LAB, she’s found new ways to share her poetry that keeps things fresh, while walking down new avenues of expression — pairing poetry with art forms like painting and photography. That work has been featured as part of Grand Rapids’ ArtPrize competition, blending poetry, spoken word performance and art installations.

“It just happens,” she said. “I just express however it arises naturally.”

Outside the art works, Kyd has teamed with the Diatribe and local breweries on the “Black is Beautiful” beer campaign, which shines a light on the social inequities she discusses in her work.

As Grand Rapids’ poetic prophet, Kyd Kane will spearhead three community projects to continue to grow the city’s interest in prose. While appreciation has grown in Grand Rapids, there’s still work to do.

Communities often value outside visiting artists over the creatives in their own neighborhood. Kyd Kane hopes to buck that trend by supporting local artists in a grass-roots way, encouraging collaboration with businesses or having community-centric events.

“What could it have looked like if the city of Grand Rapids had valued a sculptor from the city, and gave them the opportunity to make that iconic emblem that we see everywhere?” Kyd Kane suggested. 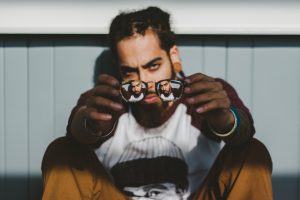 Outgoing Poet Laureate: Fable the Poet, aka Marcel Price, has served in that role for three years. (Courtesy Photo)

“If we get our city and our organizations and our businesses behind artists and we lift them up, we give them an opportunity to have this springboard into new places and spaces that they couldn’t have imagined.”

Intentionality is key, she said. Awareness, support and intentionally carried the “Black is Beautiful” beer campaign and helped spread her “Challenge Privilege” message. Creating those connections is critical during the pandemic, but will have lasting impacts on growing artistic support throughout the city.

“To have a group value the work that I do enough to put “Challenge Privilege #KydSaidIt” onto beer, really speaks volumes to what’s possible and what can be done if we just take the time to look and tap into the artists that are present here.”

Another challenge? The COVID shutdown of open-mic events where poetry flows. She said this challenges creatives to use the downtime to contemplate the best way to heal so that when the pandemic passes, they’ll have something new to share with the world.

That means tapping into musical interests in the community, so these artists work hand-in-hand with purveyors of spoken word. Kyd Kane even makes sure to opt for “self expression” over “poetry” because it covers adjacent forms of art like rap.

“‘Poet’ doesn’t sound cool to a lot of people, so they’re just like, ‘No, no, I rap,’” Kyd said. “There’s lots of rhyme that’s present in the way that we’re expressing. And so when I go on stage and I’m speaking or I’m saying a poem and it comes off kind of rapidly to some students, they’re like, oh, OK, I got bars.”

She gave a nod to headlining rappers like Big Sean and Kanye West who are poets at their core if you peel back layers of their music.

But the underlying thing that bonds West, Kyd Kane and budding poets in Grand Rapids is having a strong handle on exploring ways to best express themselves. And she wants to bolster a greater sense of self during her tenure as poet laureate.