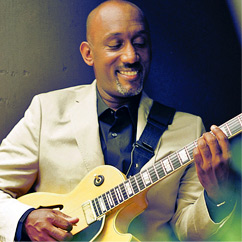 Today’s anti-summer weather might not scream shorts and hula hoops, but live music’s favorite time of year is on the doorstep as evidenced by this week’s Grand Rapids festival announcements.

The festival, founded and led by jazz enthusiast Audrey Sundstrom, will feature six acts, with the lineup thus far featuring Bowman (who has established himself as a star in the contemporary jazz scene nationally), saxophonist Phil Denny and Walt Gutowski & The Bridge Street Band. More performers will be announced by the GRandJazzFest website in coming weeks. The event will run from noon to 10 p.m. Aug. 18.

It’s just another example of the way jazz has been making a comeback in Grand Rapids over the past year, with clubs such as the Ottawa Tavern and HopCat featuring local, regional and national jazz acts on a regular basis.

Jazz weaves its way into this year’s Founders Fest, too.

The huge street party hosted by Founders Brewing Co. keeps up its groovy tradition on June 23, aka “celebration of beer and music,” by booking headliners Soulive (a New York jazz/funk band), Toubab Krewe (a North Carolina instrumental band that blends rock, jam, surf-guitar, hip-hop and West African dance strains into its assault) and Michigan’s own folk/Americana faves Seth Bernard and May Erlewine plus friends.

Rounding out the Founders Fest lineup will be That 1 Guy, Ultraviolet Hippopotamus, The Crane Wives, Four Finger Five, Afro Zuma, The Soil and The Sun, and as usual, the FBC All Stars. The 3-11 p.m. event, of course, will also feature Founders brews , local food vendors and an artists’ row.

Mark Dorich of Founders called Soulive “perfect for our type of event. We try to keep the line-up somewhat diverse, while featuring acts that can be appreciated by the casual fan. Soulive is funky, soulful and has a nice groove. A great sound to enjoy while sipping a fresh beer and dancing in the street.”

He also described Toubab Krewe as “another great fit,” due to the group’s infectious world music vibe, and said Founders Fest has always embraced local and regional acts such as Seth & May, who are “true, home-grown, Michigan musicians with a ton of talent.”

And there’s more to fill up your summer calendar: Check back here later this week for an announcement by Frederik Meijer Gardens & Sculpture Park regarding the rest of their amphitheater series lineup.