Working with Joshua Davis, Greensky Bluegrass and others, the Grayling songwriter has become a go-to collaborator whose songs likely will be heard at this weekend’s Camp Greensky Music Festival. 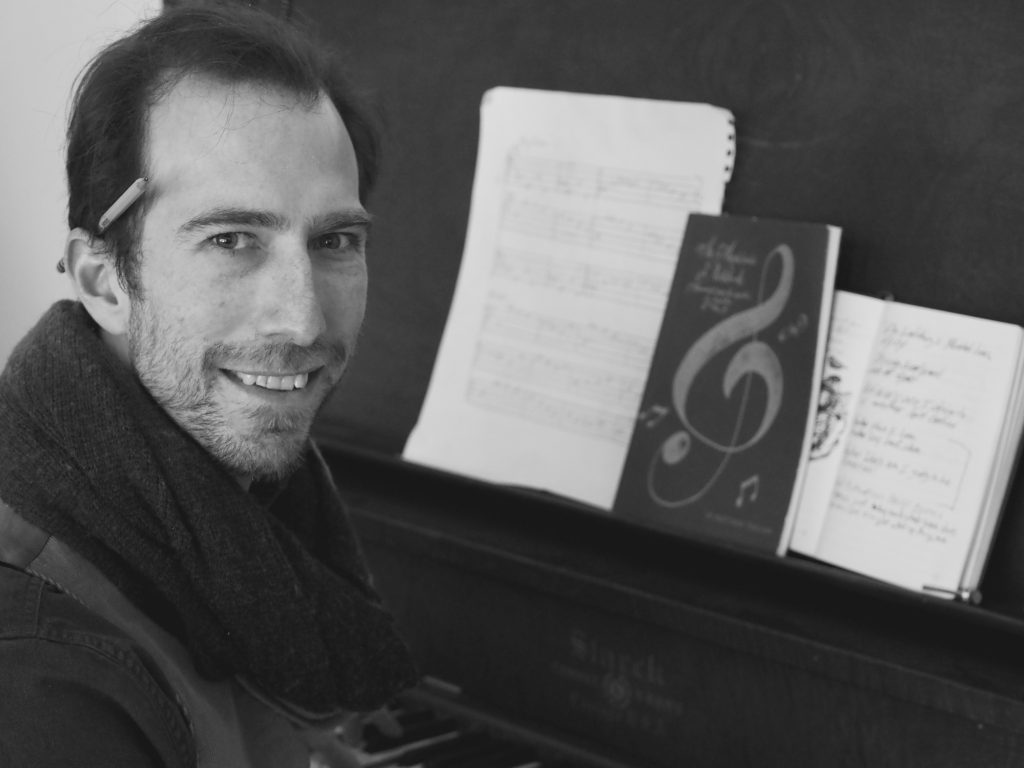 ‘Serving the Song’: Aaron Allen’s commitment to that has made him a valuable collaborator for many Michigan-bred artists. (Photo/Joanna Nigrelli)

SCROLL DOWN TO LISTEN TO SOME OF ALLEN’S SONGS

When Michigan-bred Greensky Bluegrass, Joshua Davis, Billy Strings and other stars gather for the second annual Camp Greensky Music Festival this weekend outside Wellston in the Manistee National Forest, fans are likely to hear some songs written by Aaron Allen.

Best-known for his collaborative works with Davis and a handful of other Earthwork Music collective artists, the Grayling-based songwriter has become a national name as of late. 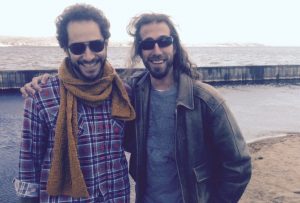 He co-wrote new songs with both guitarist Dave Bruzza and banjo player Michael Bont on Greensky Bluegrass’ 2019 release “All For Money” — which spent two weeks at No. 1 on the Billboard Bluegrass chart — and also penned a track, “Watch it Fall,” late last year with rising star Billy Strings.

That means bluegrass fans across the country are quickly taking note of one of Michigan’s best-kept secrets.

“He deserves every bit of credit he’s been getting,” said Bruzza, who’s known Allen for the better part of two decades. “He’s just an incredible writer. … I don’t think I’d be able to write songs without knowing a guy like that in my life.”

Indeed, when Bruzza is working out his own lyrics for other songs, he often finds himself asking, “What would Aaron say?”

Greensky frontman Paul Hoffman has at times referred to the Davis and Allen songwriting duo as “Michigan’s Lennon-McCartney.”

For his part, Allen said he learned long ago from Steppin’ In It and Jack White bassist Dominic John Davis the importance of “serving the song.”

“You might have good verses that don’t necessarily belong in a song and you have to let go of your ego and say it’s not about me, it’s about the song,” said Allen. 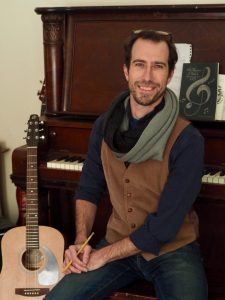 Tools of the Trade: Aaron Allen grew up around music. (Photo/Joanna Nigrelli)

“You have to serve the song. And that’s one of the things that is so great about collaborative songwriting. … If I sit down and I just try to write something I could be locked in to my own point of view, my own perspective. But if it’s (two) of us, even if you don’t have an entire idea, your half idea might inspire my half idea and then, now we are getting somewhere. It’s a thrill to build off one another.”

There isn’t another songwriter who’s experienced that thrill with Allen quite like Joshua Davis has.

The two, who first met as freshmen at Berkley High School just outside of Detroit, began writing together as high school seniors in the mid-1990s. Once they both headed off to Eastern Michigan University, things really took off.

“We lived together basically the entirety of college,” Davis recalled. “We both spent a year at Eastern in the dorms and there was this dude Russel with this thick New York accent that converted his dorm room suite into a recording studio.

“Aaron and I would go over there and get crazy baked and write songs. That’s where it all started. We called it ‘The Slack Daddy Chronicles.’ I think Aaron still has some of those recordings.”

The two both transferred to Michigan State, and a year or two later, Davis auditioned for Steppin’ In It with a song they wrote together called “Bridges.” The moment the band started, the collaboration between the two took full flight.

WEEKEND CAMP GREENSKY TO FEATURE MANY OF ALLEN’S COLLABORATORS

Davis estimated the duo has collaborated on roughly 40 percent of his Steppin’ In It and solo songs, a handful of which have also found their way into the Greensky catalog. That means they’ve been played in front of thousands at marquee festivals and major national venues such as The Anthem in Washington D.C. and Red Rocks Amphiteatre in Colorado.

A few of those adopted songs, “Delta 88,” “Crowing at the Moon,” “Dustbowl Overtures,” “Ghost of Richard Manuel” and “Last Winter in Copper Country,” will likely get played this weekend at Camp Greensky. The festival features many of the artists Allen has collaborated with, including Davis, Billy Strings, and Dominic and Rachael Davis. 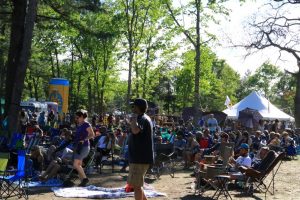 “The spirit of collaboration is something I’ve always admired about Greensky and they’ve carried it on to the festival,” he said. “From the artists to the crew, attendees and volunteers, it feels like a solid community.”

Allen’s own spirit of collaboration extended to a trio of songs he has co-written with Greensky’s Bruzza, among them the politically charged “It’s Not Mine Anymore” and classic “Worried About the Weather.” 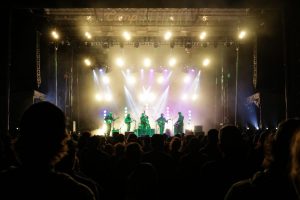 Bruzza said in both of those cases, he simply provided Allen with a theme and phrase, along with some music, and Allen just ran with them.

“He knows me pretty well, so it works pretty easily,” Bruzza said. “With ‘It’s Not Mine Anymore’ for instance, I just gave him that phrase and he gave me 30 verses in return. He doesn’t give me too much musical input, but I am always open to hearing what he has to say about it because I really value his opinion.”

Allen cited the aforementioned Lennon and McCartney of The Beatles, as well as Bob Dylan, as some of his biggest influences.

“My father was a musician, classical composer and jazz trumpet player,” Allen said. “Growing up, there was always music around and he exposed me to a lot.

“When I was young, 13 or so, he placed some Dylan in my hands, and it was love at first listen. He also talked to me a lot about the writing relationship between Lennon and McCartney, and I started to read a lot of books about that relationship.”

SERVING THE SONG AND ‘STRIKING THE BALANCE’

Lennon and McCartney were masters at utilizing the art of juxtaposition, something Allen has carried with him and translated into his own collaborations with other songwriters.

As Allen puts it: “In collaborative songwriting, a song can become greater than the sum of its parts because one partner will put something out and that will inspire the other to take it in a direction they wouldn’t have.” 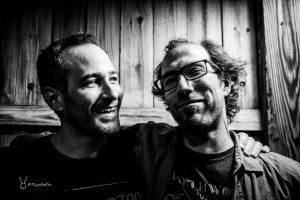 Steppin’ In It Songsmiths: Joshua Davis and Aaron Allen after a recent Kalamazoo show. (Photo/Jon Rosenberger/PhotoFooFoo)

In a collaboration on “Dustbowl Overtures,” Davis penned phrases such as “Sometimes the world sings sweet and slow, like a full-bellied bumblebee buzzing a secret you’ll never know” — capturing the “sweet moments” — and Allen turned it on its head with lines such as “The world is a whistle of a bullet going by, in a New York minute under a New Mexico sky.”

He used the same tactic when writing “Against the Days” with Hoffman on the early Greensky album, “Five Interstates.” Hoffman brought the music and some lyrics while Allen set out to write with the opposite intent. Hoffman’s poetic opening lines, “Gonna settle down slowly/Night falls rowdy in the air” were counted by Allen’s “Haven’t seen enough sunrises/Don’t have time to forget.” When Hoffman wrote “Shouldn’t be waiting for a clear sign to make a move,” Allen responded with “While these bourbon bottles mark the moments that we lose.”

“It’s all about striking the balance,” Allen said. “The yin and the yang. When an idea emerges, sometimes out of nothing, there’s truly nothing greater.

“And sure, when it gets sent out and it makes it onto a demo, that’s a great joy. And when it gets performed, that’s another. And if it makes a record and sells a thousand copies, that’s even a bigger joy. But to me, the greatest joy is just the process.”

VIDEO: Steppin’ In It, “The Ghost of Richard Manuel”