An early show performer, Channing & Quinn, helped commemorate the milestone 300th episode, which looked back at 2014 and debuted tracks by May Erlewine, Laddermatch and more. 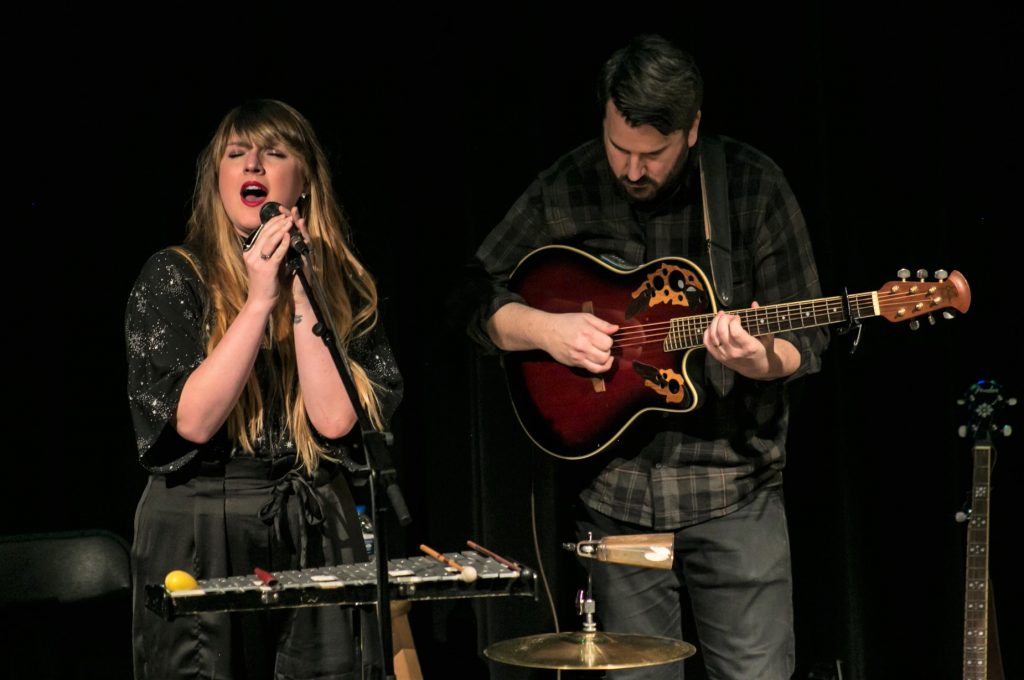 No. 3 and No. 300: Channing & Quinn have appeared on some special episodes of Local Spins on WYCE. (Photo/Derek Ketchum)

Since late August 2014, the show has aired more than 3,300 songs by Michigan artists, debuted more than a thousand tracks and hosted performances by more than 250 different local and regional acts in every conceivable genre.

So this week’s 300th episode of Local Spins on WYCE, airing at 88.1 FM and online at wyce.org, ranks as a true milestone — a partnership between the Local Spins website and the community radio station that’s showcased Michigan’s burgeoning, eclectic and remarkable music scene.

And as one of the first groups to ever perform on the radio show (firing up Episode No. 3 in September 2014), Grand Rapids indie-folk duo Channing & Quinn has, in a way, grown up with Local Spins on WYCE: Channing Lee and Quinn Mathews had just moved to Grand Rapids from Nashville when they made their inaugural appearance at WYCE. 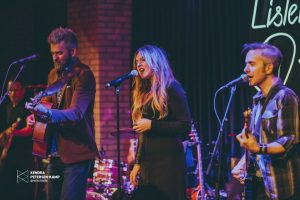 Indeed, much has changed for Channing & Quinn over the past six years. The duo released a full-length album, “Up North,” in 2016, about the same time that Mathews became WYCE’s station manager, a post he left two years later to take over operation of the new Listening Room venue in downtown Grand Rapids. Lee, meanwhile, became a full-fledged member of alt-rock’s The Verve Pipe and continues to write and perform with that band led by longtime pal Brian Vander Ark, though the pandemic has put a hold on touring for now.

“It’s been kind of nice,” said Lee, who grew up in Oregon and North Carolina, immersed in musical theater. “I think it’s been good for us to diversify and find our other separate things. It’s all still music and we love it.”

Added Mathews, who also grew up in North Carolina: “Nashville is Nashville. It’s constant and all we were doing was traveling. Coming up here (to Grand Rapids) seemed like a restart of everything. … We’ve gotten more work in music up here than we ever did.”

The duo performed two songs from home for this week’s milestone edition of Local Spins on WYCE. Watch them perform “Somersaulting” here and scroll down to listen to the entire radio show podcast.

Lee and Mathews conceded they’ve put duo projects on the back burner, with no current plans for recording another album in the near future, though they’ve performed numerous live-streams in recent months. They described the pandemic shutdown as a “bummer” that hasn’t gotten their creative juices flowing.

“I’m not inspired,” Lee said. “I feel a lot of that has been drained from me, just with what is going on in the world. … It has just sucked all the life out of me for a little while.” 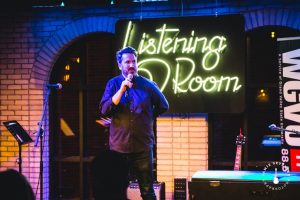 But more duo music is likely farther down the road and Lee insisted having separate projects “gives more room for different types of creativity. If we do record … a new piece of music, maybe it’ll be something different and (we) just have fun with it.”

Mathews, of course, has been coping with a silent Listening Room — a 200-capacity venue that opened in October only to close in March due to COVID-19. But this week, Mathews and Studio C announced plans for an outdoor “Listening Lawn” concert series that will take place starting later this month on the Studio Park piazza. Get more information in this Local Spins story.

“I literally measured out (on the piazza) exactly how we can do this and groups can stay six feet apart. We’re going to be very strict,” he said, adding that it’s an effort to get back to the entertainment business on a limited basis.

This week’s edition of Local Spins on WYCE — which showcases local and regional music at 11 a.m. Fridays on WYCE (88.1 FM) and online at wyce.org — debuted brand new tracks by May Erlewine (next week’s guest on the show), Laddermatch, Amy Love and Ttypes + PAWL, as well as music from Ian Thompson and Tunde Olaniran (the musicians’ pick by Channing & Quinn). The show also revisited three tracks that debuted on the very first episode of Local Spins on WYCE: Songs from Airborne or Aquatic, Alexis and Jesse Ray & The Carolina Catfish. Check out the full radio show here.