At least 10 West Michigan concerts scheduled for this week have been canceled due to COVID concerns, making it a relatively quiet celebration of New Year’s. Sign of the Times: Billy Strings was forced to cancel this week’s Grand Rapids shows.

Musically speaking, the week leading up to 2022, and New Year’s Day itself, has taken a turn that appears eerily similar to COVID’s impact on New Year’s Day 2021.

“We simply can’t put on the show that you expect and the show you deserve without them,” Billy Strings, aka William Apostol, disclosed Sunday on Facebook and Instagram. 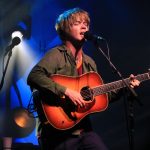 “We have been gnawing on this one, trying to find a solution to bring the music to you, but it just seems like everything is working against us this time. Sometimes you just have to take the lumps and move on. The health and safety of our loved ones (including every one of you) is paramount.”

Those with tickets to any of the three sold-out shows slated to take place Thursday, Friday and Saturday nights (Dec. 30-Jan. 1) can obtain refunds at the point of purchase; those who bought their tickets with credit or debit cards will automatically be refunded.

Several other West Michigan shows also are affected as the Omicron variant pushes up COVID caseloads across the country. Holland’s Park Theatre canceled its Wednesday (Dec. 29) show with Chudd Spangle and Convenient Trash, as well as its New Year’s Eve concert featuring Mike Mains & The Branches and The Fever Haze “due to circumstances beyond the control of the artist and venue.”

Interestingly, major venues such as The Intersection in Grand Rapids and Bell’s Brewery Eccentric Café and State Theatre in Kalamazoo already were skipping live entertainment over New Year’s weekend, making this a relatively quiet celebration of the arrival of 2022.